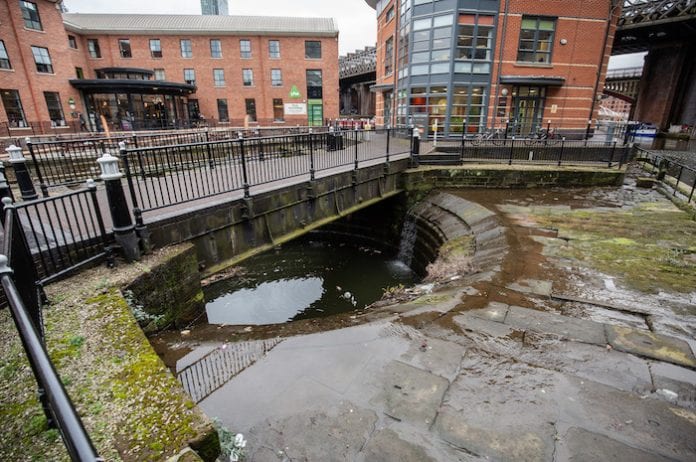 Among Manchester’s many ground-breaking firsts – first railway, first aircraft manufactory – the first first was the opening of the Bridgewater Canal in 1761.

This was Britain’s first man-made waterway taking a route independent of rivers. It originally linked Worsley with Barton-upon-Irwell and reached Castlefield in 1765. The canal was financed by Francis Egerton, 3rd Duke of Bridgewater, who wanted to find a way to reduce flooding in his Worsley mine.

Coal had first been mined at Worsley in the Middle Ages, but every time a seam was exhausted deeper pits were sunk and became increasingly prone to flooding.

The duke’s engineer, James Brindley, and land agent, John Gilbert, proposed letting the water be channeled and the coal taken out along it on special boats four and a half feet wide with protruding sides, known as starvationers, which were loaded at the coal face and hauled up an inclined plane into the open.

The duke realised he would have enough coal to supply the needs of local towns. The most important of these was Manchester, so he decided to build a canal across the land in order that his supply could reach those towns. Work on the new canal began in 1758. The cost, £168,000 (£25 million in today’s money), was paid by the duke.

One great advantage of the route was that no locks would be needed. Once the canal opened, the price of coal dropped and entrepreneurs began to build factories along it. Most of these have gone at the Manchester end.

Coal was lifted up to the road in Castlefield by the sandstone rockface that remains unaltered on Castle Street. A waterwheel powered a hoist that allowed the crates of coal to be raised some 45 feet. The canal was soon returning profits of £80,000 a year.

The eastern end of the Bridgewater Canal can be found on the Knott Mill side of the quiet stretch of Deansgate, past the station.

West beyond this point the water belongs to the River Medlock, which originally supplied the canal with water at the Manchester end. Here the Medlock was culverted by Brindley. It disappears from view at Deansgate, right next to where the new 50-storey skyscrapers are going up, and reappears at the road called Potato Wharf about half a mile away.

By the youth hostel off Liverpool Road is Giants’ Basin, all that’s left of Brindley’s original ingenious clover-shaped weir to take excess water.