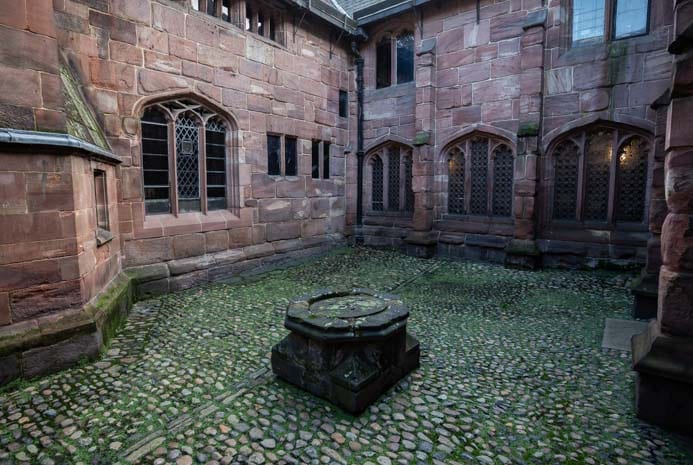 Chetham’s is the oldest building in the city of Manchester. It has been a college of priests, a school for poor boys, and is now a music school for gifted children.

The buildings also contain Chetham’s Library, the oldest library in Europe and in the English speaking world.

The ancient stones are best viewed from the internal courtyard. Work began on them in 1422, a year after Thomas de la Warre, the rector of the adjacent church, St Mary’s (now Manchester Cathedral), sought permission from Henry V to upgrade his place of worship to a collegiate church – a church with a college of priests attached.

De La Warre was also the Lord of the Manor of Manchester and lived where Chetham’s now stands. The site had been chosen hundreds of years previously as it stood on an outcrop near the confluence of the Rivers Irwell and Irk and could therefore be easily defended from attack. 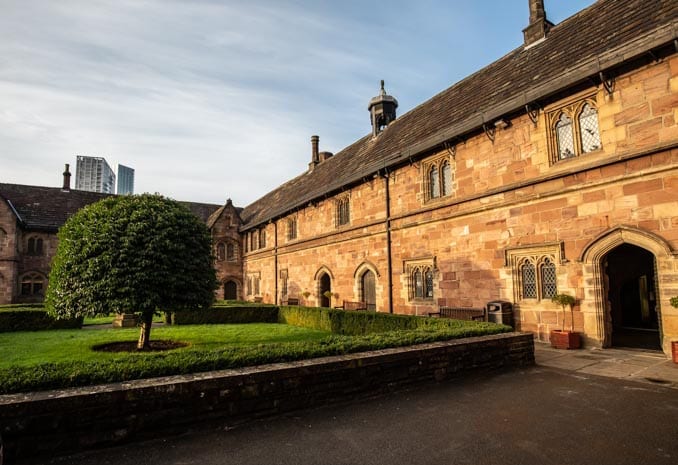 On gaining royal approval, de la Warre demolished his manor house and began building the College of Manchester – what is now Chetham’s – where priests could live next to the church and officiate in the locale.

The College of Manchester continued without much drama for over a hundred years until the Reformation of the 1530s.

Over the next few generations, it veered from Catholic college to Protestant college and back again several times.

By the 1640s the buildings were in a derelict state and could easily have been knocked down but for the intervention of the richest man in Manchester – Humphrey Chetham, a local cloth merchant and property developer.

The site seemed ideal for his ambition of opening a hospital for poor boys from “honest, industrious and painful parents.” Not a place for tending to sick people but a place where one could be granted hospitality. 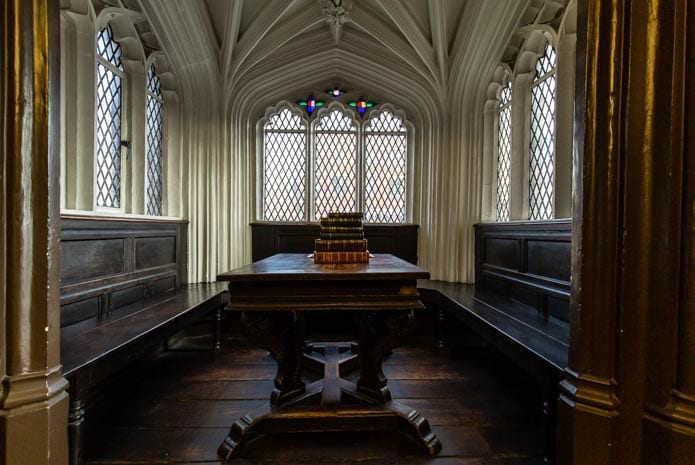 Chetham’s Hospital opened in 1656 as a school for poor boys and continued until well into the 20th century. It has been a music school for the last fifty years.

In his will, Humphrey Chetham also stipulated that funds be used to found a library “open to scholars and others well affected.” He instructed the librarian “to require nothing of any man that cometh into the library”, which is why today Chetham’s Library is still free and open to the public – of particular help to those studying local history.

The library opened in 1653. Its most famous users have been Karl Marx and Friedrich Engels who came to Chetham’s in 1845 to research politics and economics for their theory of communism.

In 1870 Engels wrote to Marx: “During the last few days I have again spent a good deal of time sitting at the four-sided desk in the [library] alcove where we sat together 24 years ago. I am very fond of the place. The stained glass window ensures that the weather is always fine there. Old Jones, the librarian, is still alive but he is very old and no longer active.” 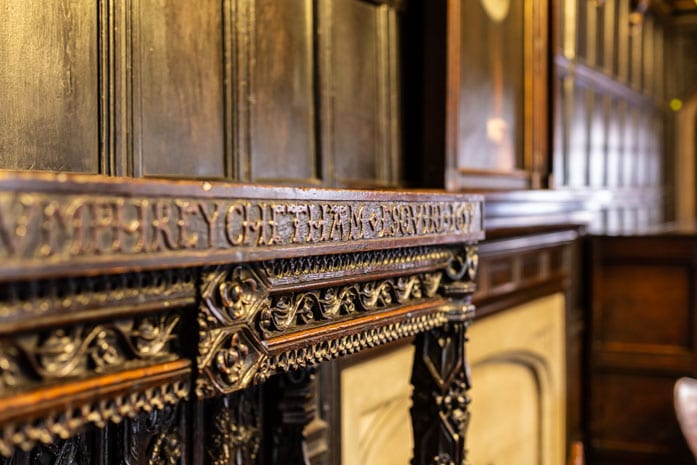 That letter has resulted in Chetham’s Library becoming a place of pilgrimage for communists and socialists the world over.

Despite considerable renovation and rebuilding on the site over the centuries, most of the 15th century features remain.

These include the baronial hall, cloisters, the fellows’ dormitories and a particular highlight, the Audit Room, with a timber ceiling decorated with grotesque designs, twelve ladder-back mahogany chairs from around 1770, a George I period walnut settee with cabriole legs resting on ball and claw feet, a one-fingered lantern clock still in working order, and a table supposedly burned with the devil’s hoofprint.

Their survival is remarkable in this most urban and over-developed of cities.

The Fox Court is a secret opening within the ancient walls almost opposite the entrance to the Library. Inside is a well, and peering down it is possible to catch a glimpse of the eyes of the Chetham’s fox looking up. Or it might be a trick of the light.