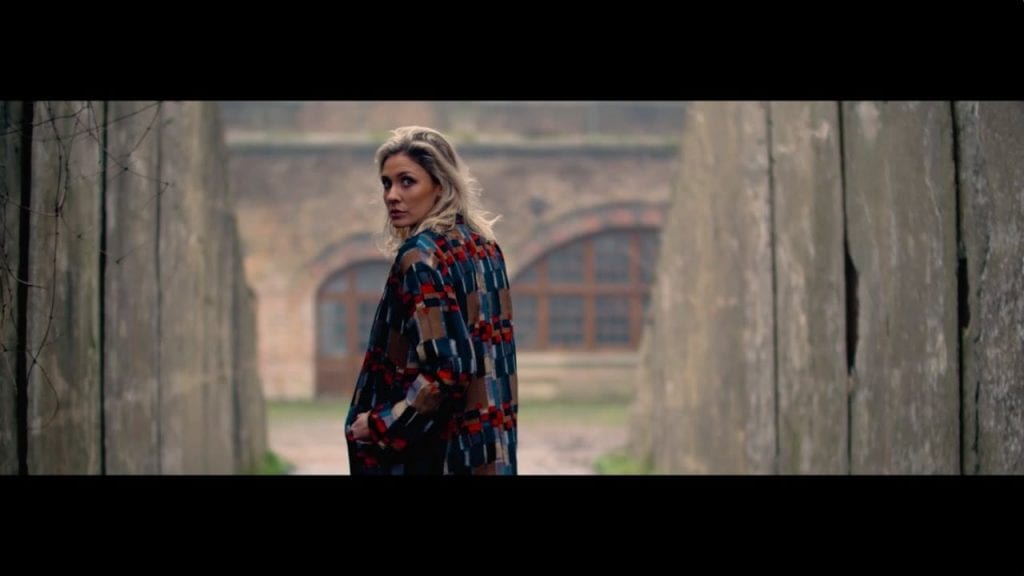 In 2001, she entered TV talent contest Pop Idol, eventually won by Will Young. Although she didn’t make the final ten, she wowed judge Simon Cowell enough for him to propose to her and impressed producer Simon Fuller enough for him to sign her to his 19 management company.

The following year, she signed a deal with RCA Records, released her first single, When I Lost You and co-wrote fellow Pop Idol contestant Zoe Birkett’s debut single, Treat Me Like a Lady.

Turning down the opportunity to become a backing singer for Kylie Minogue to concentrate on her own solo career, Sarah spent the next five years honing her craft, writing up to 200 songs with various collaborators including Greg Fitzgerald and Peter John Vettese.

Salford-born Sarah is making her long awaited return to music with the EP Full Circle which is released on Friday 24 March 2017.

Her first release since 2009, most of the EP has been produced by the legendary Rob Davis, the man responsible for Kylie Minogue’s Can’t Get You Out of My Head and Spiller’s Groovjet (If This Ain’t Love).

It’s been a while since we last heard from you. So what have you been up to?

I call it the seven year itch. Every seven years I sort of reappear. It’s becoming a bit of a habit, so yeah, it has been a while.

I brought out my last album in 2009 then I got married and had children, which took up a bit of time. I then got back in the studio about three years ago. I accumulated quite a few songs and came up with this new EP that I did with Rob Davis, who actually wrote my very first single. So we got back together and we did this new dance EP which we’re really happy with. I wanted to do more dance music because the last album was very different to this one.

Do you think being a mum has changed how you feel about music or the music industry?

No, not at all. It’s more of a juggling act. School runs and everything in between but no, it’s not changed my view on music at all. I don’t think it ever will. I think there’s something about music that’s part of my DNA.

So what made you want to come back as an artist?

I just wanted to share it with everybody. I love performing and some of my old fans were asking “When are you coming back?” and “When can we have something new?” I don’t really put a time limit on anything. When it feels right, it feels right. This just felt right so we went ahead and got everything ready for people to hear.

The music industry has changed massively since I started in it, so I started learning about social networks and streaming. It’s all quite different and it’s easier in some ways to get your music out, but you have a responsibility in some ways to do something that is true to you.

I’ve got so many songs I could just throw out there but I think it can make it a bit disposable when it’s like that. I think it’s important to be able to say these are the songs. I didn’t really put a stamp on why now. It’s just worked out that way.

Yes! I lost my voice! It was meant to be released in September and we were about to do the launch and everything was ready to go. I released three of the songs and I lost my voice. I had to postpone everything. It was a very frustrating time but you’re human at the end of the day. But it’s back now, everything’s fine. No operations or anything. Probably too much shouting at the kids!

And this EP takes you back to dance music?

I love dance music and I love to dance and I felt like I wanted to do something more upbeat. My last album was very very heavy, a bit more classic, but I did this project with Rob and worked with a few other writers and I was happy to go back to dance music. My fans wanted me to do more dance music so I was sort of giving people what they wanted.

To be honest, I enjoy all genres of music. There’s no rule to what I can or can’t do. This was the way it went and it felt right.

Do you have any favourites on this EP we should listen to?

I do. Full Circle is a big standout but I absolutely love Footprints. And funnily enough, I didn’t write that with Rob Davis, I wrote it with Michael Conn and Joe Killington. It was one of the first ones we did for the EP, and it’s kind of a Cafe Del Mar sort of timeless feel. It has a real worldly feel about it.

You’ve previously listed George Michael and Jewel as influences. Did they influence this EP?

Jewel I haven’t listened to in a long while. Have you heard of Joan The Policewoman? I’ve seen her perform, I love Jess Buckley. This latest EP – I was listening to Depeche Mode at the time to be honest – but lyrically and melodically I do whatever feels right in my heart. I’ll be inspired by other artists but I wouldn’t decide I want to sound like this person or that person. I think that’s what great about music – there are no rules – and today everybody is willing to experiment and is willing to listen to people experiment which is really nice.

And I think the quirkier you are, the more people like it. I’m very much a commercial writer, quite traditional with verses, chorus and middle eights and things like that. I think that’s why I like Footprints, because it’s different. And with 17, that’s also on the EP, we really messed around with that.

Ah yes. I just like to go to places and just sing at the last minute. I used to do it in London quite a bit. I genuinely love to get up and sing, that’s why I do it. It’s like a release in a way, and I’d heard about the Whiskey Jar and I think I had some tapas next door.

The Northern Quarter is just so cool at the minute. I moved back to Manchester when I met my husband, about five years ago. I never knew it was getting cooler and cooler. London is great, but Manchester is just the place to be. It’s not too big. There were so many talented people at the Whiskey Jar that Tuesday. It was a real eye opener. I was really happy to do that gig.

I’m probably going to go and gig, do some more shows. I really want to do more shows in Manchester. Just get up and perform. I’m itching to do another EP, because this has been a three year project for me. I’m itching to do more writing. I love to write – whether it’s for me or other artists. That’s something that’s important as well.

What do the kids think?

They tell me to be quiet! They know that that’s what I do. I did Pride last year and they got so frustrated because they couldn’t get near me because I was on the stage. They didn’t quite understand. Maybe the older they get the more they’ll understand it.

But music surrounds them?

Every morning we wake up to Joe Le Taxi. But I think it’s important to introduce children to music. My son is learning piano – that’s the one instrument I wish I’d pursued. I started playing it when I was twelve, but then I started to go out, so I didn’t practice, so I’m eager for them to learn about music.

Sarah will be performing songs from Full Circle at The Whiskey Jar on Thursday March 23, 2017.

Read More »
September 26, 2020
PrevHave you read?Why some of Manchester’s bars and restaurants don a pineapple symbol
Next read...Three to see this weekend: ghosts, grub and gin Next