If you live or work in a Manchester city centre it’s probably not escaped your attention that there’s a bit of building work going on, to put it mildly.

Down at Spinningfields, Allied London’s £73 million No.1 Spinningfields building has been making an impression on the changing Manchester skyline with the erection of the first of three tower cranes that will go up on the project before Christmas.

BAM’s construction of the 117 metre tall crane began in the early hours of Saturday morning and by Sunday evening it was complete. The crane will remain in place for 63 weeks and when it is taken down it will have climbed twice to a height of 165 metres, just four metres below Manchester’s tallest landmark, Beetham Tower.

The process drew a crowd of onlookers throughout the day who marvelled at the scale of the operation and in particular the team involved who were working at height.

“This is a big milestone for the project and it’s great that people are so interested in what we’re doing here,” said BAM construction director Tony Grindrod. “Our team did a fantastic job of getting the crane up over the weekend in the heart of the city centre with minimal disruption. Workers from our subcontractor, Select Plant, certainly showed their bravery to people in Manchester while working at such a height.” 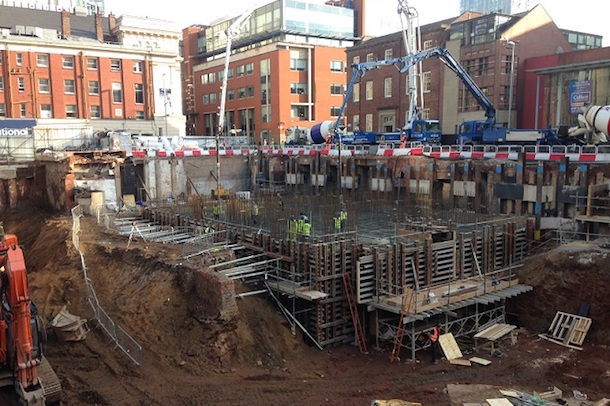 The scale of Allied London’s commercial office development became clear last week when 150 wagons arrived and successively poured over 860 cubic metres of concrete during the massive logistics exercise – the equivalent of 2150 tonnes when set – to form the ‘core 1 base’ for the 24-storey structure.

“This may be the biggest single concrete pour BAM has ever done,” said Tony. “It forms the base of the Core 1 structure that will support the 23 storey concrete core above along with the 60 concrete piles each passing down 20m into the bedrock below. The No1 Spinningfields project will gather pace in the new year when the structural steelwork starts to emerge from the basement and follow the concrete core up the building with a workforce of over 600 expected to be involved in the project at its peak.”

Allied London development director Graham Skinner said, “We are on schedule with the construction programme for No.1 Spinningfields, which will be a world-class commercial office building in one of Europe’s most successful regeneration developments. Allied London is delivering what will be the finest and highest specified business environment in Manchester with a rooftop bar, restaurant and terrace, a premium business lounge, innovative amenity and flexible fit-out options.”