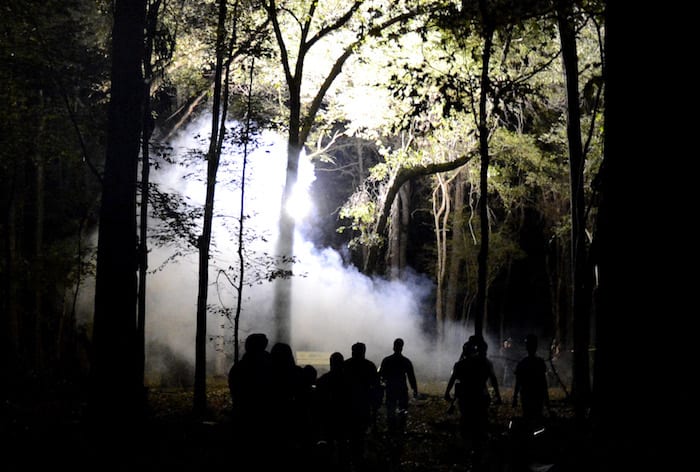 If, like me, you’d love nothing more than to experience a real life zombie apocalypse – then you’re in for a huge treat.

The Undead Hour is offering you the chance to step out from behind your games console and onto the front line, so put down your controller and pick up a paintball gun as you  battle against an undead horde of ravenous zombies and attempt to save humanity.

It’s the perfect mix of The Walking Dead meets Call of Duty, where not only will you compete again a rival team – but you will also have a swarm of brain-eating zombies to contend with too.

Whether you’re planning to go full-on Negan for the occasion, destroying anyone in your path for a shot at victory – or taking a friendlier approach to your zombie-killing masterplan like Carol – it’s time to decide which of your friends can help the team survive – and ultimately win – this zombie themed paintball escape room extravaganza.

On the day of reckoning, will your team of zombie-battling brothers and sisters be able to work together in order to survive?   Two teams will compete to crack the codes, decipher the maps and save themselves from zombies while thousands of paintballs fly through the air at you and your zombie-battling squad.

Each team is made up of 20 players – five squads in total – and you will have 60 minutes to complete the tasks and fend off the undead in a race to see who will find the cure and survive the apocalypse.

You win the game by unlocking the boxes to reveal the clues – and solving all the secret codes before the time runs out. As in Call of Duty, if a player is shot by the rival team, they must return to base to respawn.

And if that wasn’t difficult enough, if a zombie catches you you die and are out of the game for good – so be warned, you must be on the lookout and stay vigilant in order to survive!

In terms of difficulty, the event is a solid 7 out of 10 – with 10 being impossible to complete.

“The event takes courage and wisdom and guests can expect to be put under pressure to crack the codes and find the cure while being targeted by rival opponents,” event owner Aaron Charles told us.

“Guests will mainly paintball against their rival team with zombies coming in at different intervals. The event will be a complete action-packed 60 minutes filled with thousands of paintballs, smoke bombs and codes. With prizes hidden in locked boxes and with the zombie cure to be found, they can expect a fantastic yet hard experience.”

The Undead Hour takes place on Saturday 6th April 2018 at a secret war zone location outside of Manchester that’s yet to be disclosed. Details of the location will be shared with ticket holders in the days prior to the event.

Tickets for The Undead Hour cost £39.67 per person and are very limited. They also include body/game equipment and 100 paintballs each. For an exclusive 10% off tickets quote code: UNDEAD