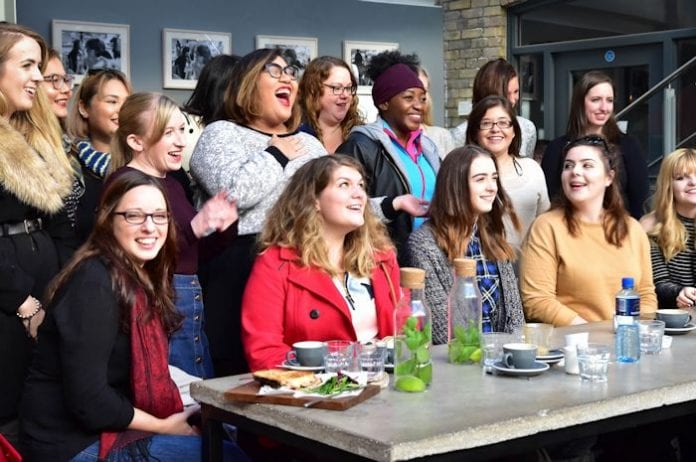 Elva Carri really wanted to go out dancing one Friday night. So so she texted all her friends, but they were all busy. Some said they were with their boyfriends. Some were working late. Elva found herself thinking, ‘I can’t be the only person who has lots of friends, but none of them are free to do anything.’

So she decided to try to find new friends a different way.

She went on Tinder, the dating app she was using at the time, and changed her gender setting so she would appear as a man. That meant her profile would only appear to straight women.

To avoid any confusion, Elva then wrote in her bio that she was actually a woman looking for other women to go dancing with. Platonic dancing that is. She thought two or three people might contact her – and was amazed when more than 100 people did.

The app has just become available for women in Manchester – and the group already has 61 members.

“There already is a lot of activity going on in the Manchester group,” says co-founder Pamela Newenham. “Someone posted that she booked her third driving test and asked for some advice and people are selling tickets for nights out and stuff.”

The free app is available on IoS, Android and there’s a desktop version too “because we know that lots of people like to have a sneaky tab open at work just to check in every now and again and see if anything’s happening,” says Pamela.

The app is available to women only, so before joining you have to go through a verification process just to check that you are – that’s right – a woman.

“We do get guys trying to sneak in every now and again but they don’t get through.” Pamela jokes.

Once you’re on the app you’re free to select a topic group like relationship advice, travel, careers and so on.

Group members can set up events and once they post the details on the app, everyone gets an alert so they can come along.

The app, which now has over 100,000 members and is available in over 50 cities, offers everything from support and advice to Netflix recommendations.

Pamela says that it is getting more difficult to form and maintain friendships with people living such busy lifestyles nowadays.

“A lot of people are moving to new countries for work, for example. It can be very hard to make friends in a new city.

“In other cases, people stay in their home town but find that many of their old friends have moved. Others are surrounded by people settling down and getting married and they’re the last single person in the group, so they need more single people to do stuff with.

“Equally, you could be the first one in your group to have children and you want to meet other new mums.”

“Tinder, for example, used to have a bad connotation. It used to be seen as sad to find a date online.

“Likewise, I did definitely notice that when we started, people didn’t want to say they wanted new friends. But now they think finding mates online is cool. And everyone’s doing it.”

The app is not only beating loneliness for women from all over the UK. It has also helped a woman find her long lost father.

“This woman – who can’t be named for privacy reasons – posted a picture from around 1970 in the group and asked if anyone could help identify someone in it. It was her father, but she didn’t even know his name.

“Someone eventually recognised another person in the picture. So they put her in touch with that person and she got to meet her dad.”