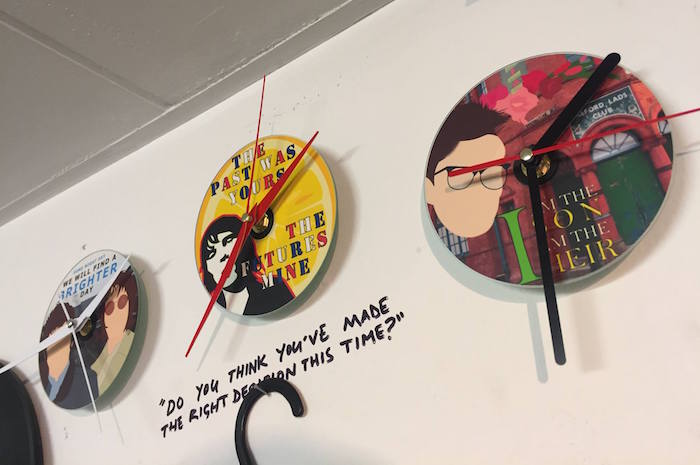 Saturday is Record Store Day. It’s the day to pick up exclusive releases from your favourite shops, participate in in-store events and enjoy live music showcases at a range of independent venues.

A limited edition 7’’ single by The Smiths will be available for the day featuring two previously unreleased demo tracks of The Boy With The Thorn in His Side with Rubber Ring on the B-side.

Other limited edition releases on the day feature Manchester favourites past and present including Elbow, The Courteeners, Magazine and Cabbage so keep your eyes and ears open.

A whole day of events at Piccadilly Records 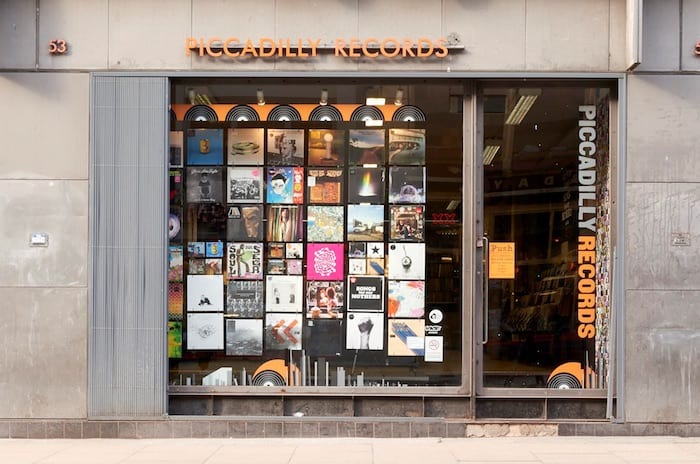 As well as having a huge amount of limited edition vinyl on offer, this iconic Oldham Street store will be hosting some very special activity to keep you entertained throughout the day. They’ve assembled a team of musicians, label heads and vinyl experts including Marc Riley from BBC 6 Music to keep the queue moving and grooving with an eclectic mix of their favourite tunes from 12 till 5pm. Workshop Coffee will be there to provide a much needed caffeine boost and the master bakers from Blawd will be on hand with donuts.

This Hilton Street store has two official releases for Record Store Day, both with a Manchester theme. The first is a Manchester Punk Compilation of rare and previously unreleased tracks from 1978-82 which is on limited edition green vinyl and comes with a punk fanzine. The other release is a 12″ EP by One Summer, a band formed by two members of Manchester indie legends The High in the early 90s and features artwork from Trevor Johnson, who was one of the in-house designers at Factory Records.  Daniel Clarke will be playing an acoustic set in store.

Get to this second floor Afflecks Store which is offering ‘buy three vinyl and get the cheapest free’ not just for Record Store Day but all week! There’s also the chance to get your hands on bespoke music memorabilia including custom punk-inspired clothing from Mickey Strangeways, framed pictures, vinyl clocks and much more.

Enjoy a musical all-dayer at Soup Kitchen where  stand-out bands including Ill, Kyota and Peaness will be bringing the basement alive.  Multiple live acts are on til late and it’s just £3 entry.

The finale of the 3-day Manchester Punk Festival falls on Record Store Day with bands like Braindead and Paint It Black playing at venues across the city.

Heaven on Earth is a unique event coming to the historic venue of Halle St Peters in Ancoats, starting on Record Store Day. It includes a record fair and live music from a range of artists including OLA and Bulldog plus stalls from Cracking Good Food and Seven Bro7hers Brewery to keep you fuelled up.

Get down to Edge Street bar Common from 5pm to try some limited edition Record Store Day beer brewed by Cloudwater in collaboration with Piccadilly Records. There’s also live music throughout the evening, including Former Bullies and Wedding plus DJs.

Northern Quarter bar Cottonopolis is hosting 15 hours of vinyl to celebrate the day which champions the culture of independently owned record stores. This all-day event will see special guest Nik Weston of Mukatsuku Records make his Cottonopolis debut followed by Mr Scruff playing a full hour of never heard before dub plates from 5-6pm, freshly cut that very afternoon at the Brighter Sound & Birds Hit Records vinyl weekender workshop. All the artists involved will be down too. With free entry all day and music from 11 o’clock in the morning, plus a mini record fair, what are you waiting for?

13 hours of tunes from 8am at Eastern Bloc

The Stevenson Square specialists in dance and tech vinyl are celebrating Record Store Day from 8am. Marking the 10th time they’ve celebrated the day, they’ll be selecting the best records from all year round plus official RSD titles. There are more than 20 DJs lined up from 9am til 4am including Samuel Kerridge, Space Afrika and Karl Roscoe – so that’s an all-day party with 13 hours of tunes.

To tie in with Record Store Day 2017 and to celebrate the launch of the 9th Soundwave Festival in Croatia, the folks at Eastern Bloc are combining forces with First Word Records to throw down a mother of a party at Stage & Radio, Port Street. Passing through on behalf of First Word Records will be Mr Thing, on the turntables since 1987, plus BobaFatt, a famed DJ who hosts a weekly show on London’s only Itch FM, London’s only dedicated hip hop station. Plus there will be appearances from Swindells and Jim Bane in the basement, whilst keeping things warm in the upstairs bar will be Jesterman and Taste the Diff’rence.  Tickets are £7 early bird, £8 advance and £10 on the door, also available from the Eastern Bloc store.