Astonishingly, it’s 17 years since Tampopo first opened in their canteen-like basement in St Ann’s Square. British co-owners Nick Jeffrey and David Fox based their restaurant approach on their own real-life travels in South East Asia and have continued to serve an evolving showcase of the best Pan-Asian dishes.

Of course, this was a tortured and tragic region in the 20th century and the legacy of so many wars there is the abundance of deadly land-mines still to be cleared. The Deansgate-based charity MAG (Mines Advisory Group) exists to save lives across the world by clearing land-mines, destroying weapons and making land safe after war. It shares a Nobel Peace Prize for its role in making daily life safer for millions of children and their families.

They work in many areas that bring us some of the classic, beautiful dishes that Tampopo has made famous, including Vietnam. Now in a compassionate partnership, the restaurant chain is donating 50p to MAG from the sale of every Vietnamese Pho – noodles in a broth scented with fresh Asian herbs, star anise and lime (with sliced rump steak £9.95, with chicken breast £8.50).

Nick Roseveare, CEO of MAG said: “It’s cuisine with a conscience. We don’t think it is fair, or right, that people should live in poverty and danger, and we’re thrilled that the team at Tampopo are supporting our work to change things. Everyday a weapon left behind after war kills or maims an innocent person. People are left living in fear. Fear for their lives, fear for their children, who are in particular danger just by being curious kids. 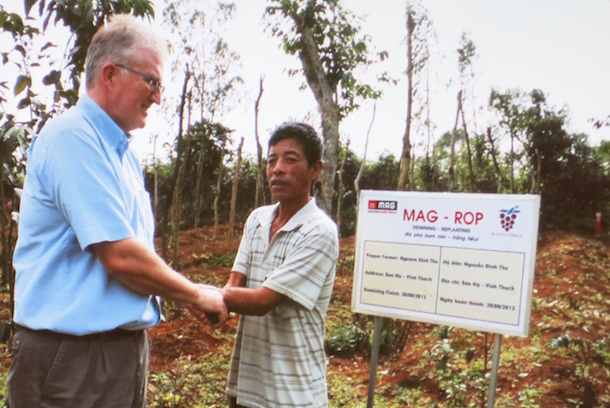 “We need to get to every landmine and unexploded bomb before a child does. By simply buying lunch, you can help us save more lives,” added Nick, pictured above with a landmine victim, whose life MAG has helped to improve.

Tampopo Co-Founder David Fox commented: “We’re delighted we’ve got this partnership off the ground – it’s something we’ve wanted to do for a while, so we’re really proud that it’s all come to fruition. The fact that a Tampopo Pho can now help to save a life in the country from which the dish originates now is very special to us.”