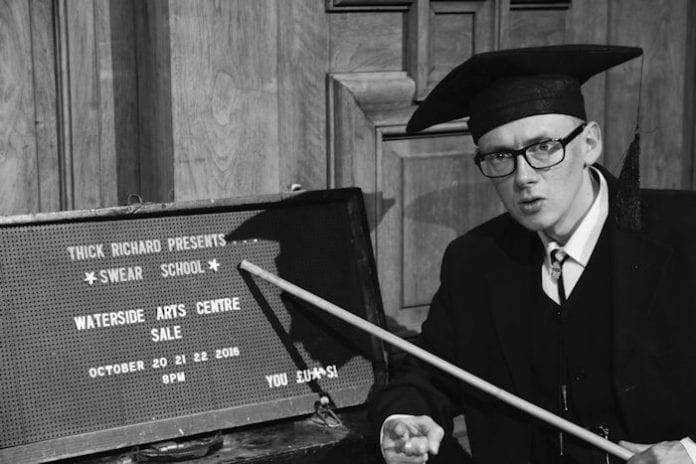 Our attitudes to swearing are changing. Apparently people are much more relaxed about it these days. According to a recent Ofcom report on offensive language, you can say almost anything on TV without offending people, especially after the watershed.

Words that used to be considered shocking have lost the power to shock. The only people likely to be offended by the word ‘bloody’ these days are probably over 70 and living in a convent.

However, some words are still considered shocking. It’s all about context.

You expect to hear the ‘f word’ or the ‘c word’ on a building site or at a football match. On the other hand, if they were used in a church by a vicar in his sermon you’d probably be taken aback.

Post-watershed TV is a minefield littered with f bombs but if Mary Berry called Paul Hollywood a twat on the Great British Bake Off it would come as something of a shock – even though it would be completely understandable.

And you would expect to find hundreds of profanities in a novel by Irvine Welsh but just one in a novel by Jane Austen would probably be more shocking.

Swearing can also be funny. Think Malcolm Tucker’s master classes in the art of the potty mouth in The Thick of It.

Swear School is an informative, funny and foulmouthed lesson in the language of swearing by Mancunian performance poet Thick Richard. A fast-paced crash course in everything you wanted to know about bad language that school couldn’t teach you.

Swear School will look at the social, geographical and political context of the language of swearing and cover childish swear words, blasphemy, physical gesturing, colloquialisms, euphemisms and innuendo, whilst looking into why we swear and what it means to be offended.

You’re not very fond of Stockport are you? When you go there do you have to go in disguise?

I lived there between the ages of 14 and 17.  I was a bit of a weirdo as a kid and they didn’t seem to like me, which made me more of a weirdo. I’ve never really felt comfortable there, especially after writing that poem. We nearly got arrested while filming the video there. But I won’t go into that. I did the Moovin Festival there earlier this year. It was pretty intense. I was on the main stage at midnight and it was already pretty rowdy. I didn’t perform God Hates Stockport. I feel a bit of a chicken, but it would have been suicide.

Swear School looks at the history, definition and use of swearing. Do you consider yourself to be an expert at swearing?

I think a lot of people like to think of themselves as experts in swearing. But when you start to study it you find its mind bogglingly complex. It’s enormous and there’s a lot of contradictions in the facts because there’s no education in it – until now. I suppose I’m more qualified than most though.

People are more relaxed about swearing these days. You can say almost anything on TV after the watershed. Isn’t it becoming more difficult to shock people?

People have been hard to shock for a long time. The rules of TV censorship don’t represent most people’s standards. I think being easily offended by swearing is a type of snobbishness. It’s words. If you’re an adult there shouldn’t be many topics you can’t handle being discussed. It’s not like watching an execution on You tube.

What is your favourite swear word and why?

Bellend. It’s graphic, descriptive, not that common, so people still get surprised by it. It’s playful, it sounds funny and it’s a friendly level of offense – an affectionate alternative to dickhead. It’s a great description of a lot of people. Rather than the thing it’s describing it conjures up the idea of a buffoon.

Are any words verboten in Swear School?

When talking about the language of offence I couldn’t really not discuss the ‘n word’, although obviously being white I’m not particularly qualified to discuss this, so it was a difficult thing to approach. I feel like I’ve done it respectfully, but I’ll only find out in front of an audience. It’s not something that I want to get wrong at all. It’s a very heavy word, and when talking about it, it can be very easy to be misunderstood. I really don’t want to be thought of as the new Jim Davidson!

Will I learn any new words if I come along?

Which exponents of the art of swearing do you most admire?

A lot of fictional characters. Joe Pesci in the Scorsese films, Samuel L Jackson, Rik Mayall.  Peter Capaldi’s character Malcolm Tucker in The Thick of It is the one to beat at the minute. Apparently when the scripts are finished, Armando Iannucci sends them off to a swearing expert somewhere in Scotland. I’ve no idea who this man is, but he’s a big hero of mine.

What would you say to someone who doesn’t like swearing?

People who don’t like swearing and claim not to swear themselves actually have their own ways off swearing. The part of the brain that makes animals howl in pain, purr with pleasure or growl to ward off predators is the same part of the brain that we use to swear. When we swear we’re swearing for these same reasons, so people who don’t swear will have their own words for these same purposes. So they can fuck right off.

Swear School will be your first full length show.  Are you bricking it?

After that gig in Stockport it’ll be a piece of piss.