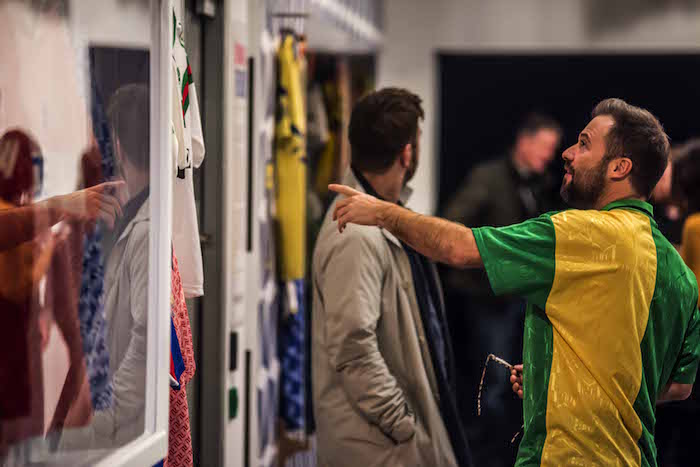 Believe it or not but until the late 70s/early 80s, the only people who wore football shirts at football matches were the players.

Fans wore scarves or bobble hats in their team’s colours.

Replica kits were for kids so they could pretend to be their favourite player when they played in the street or garden.

That was OK if you were a City fan because they were the only team that played in sky blue apart from Coventry, and no one in Manchester supported Coventry.

But if you were a United fan, you’d have to buy a cloth badge from the club souvenir shop and ask your mum to sew it on your football shirt. Because before the arrival of sponsorship, there was nothing to distinguish a United shirt from any other team that played in red, including Liverpool. 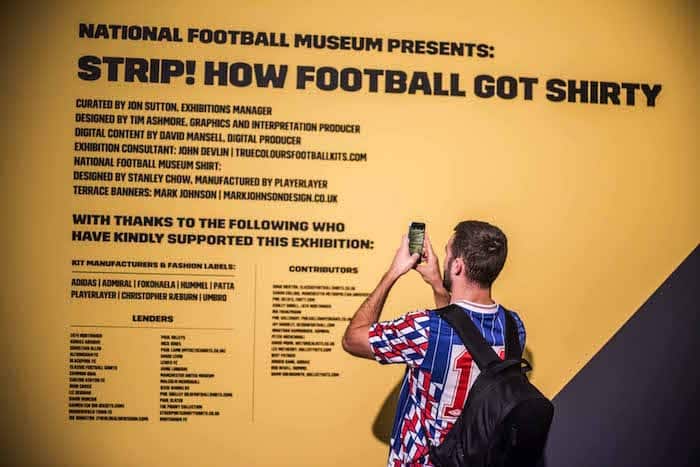 To complete the outfit would be a pair of pumps or plimsolls. If you were lucky, your mum might get you a pair of Adidas with three stripes. If you were unlucky, she would buy a cheap pair of trainers with four stripes from Woolworths or the market and you would have to colour in one of the stripes with a marker.

In the last 40 years, the replica football shirt has gone from an item of children’s sportswear to adult leisurewear. And it’s no longer just a matchday uniform. For some people, it’s an article of clothing that’s worn all the time. In Newcastle it’s almost compulsory.

Like trainers, football shirts have become highly collectable. There are even shops dedicated to them.

So it was only a matter of time before there was an exhibition dedicated to the football shirt.

Strip! How Football Got Shirty tells the story of how the humble football shirt has evolved from the heavy woollen jerseys of the Victorian era to the heavily branded polyester of today – slowly at first, then rapidly in the last 30 years thanks to technological advances and the development of synthetic materials.

According to the National Football Museum, it’s the biggest curated exhibition of football shirts ever assembled in this country.

The accounts of designers, manufacturers, artists and experts are woven throughout the exhibition. But nothing tells the story better than the shirts themselves.

If you’re a fan of football shirts, it’s like Willy Wonka’s Chocolate Factory, but without the chocolate or the Oompah Lumpahs. Instead, there are football shirts in every colour of the rainbow, including rainbow coloured shirts, because nowadays football shirts can make political statements.

The Hall of Shame is a chamber of horrors containing some of the most horrific shirts ever seen, including one of the most notorious of them all – the grey monstrosity worn by Manchester United at Southampton in 1996, a kit that was so bad the players had to change at half-time.

You may think they don’t come more gruesome than that. But believe me they do.

And there are some real curiosities on display, including a shirt worn by Spanish club Leonessa that looks like a tuxedo, a John Bercow tribute Arsenal shirt, a Swedish shirt with 14 sponsors and shirts by cult designer Fokohaela which include an ‘Engerland’ shirt with a biscuit motif.

To coincide with the launch of the exhibition, the Museum has collaborated with Manc legend Stanley Chow on a newly commissioned shirt made from 50% bamboo charcoal which will be worn by staff, with a limited number available for sale at the museum shop. Just make sure you don’t stand next to any pandas when you wear it.

With over 200 shirts on display, there’ll be at least one that brings back memories of a particular match or player or goal – or maybe even something more personal, like a holiday or a romance or even a holiday romance.

If you’re in town and have an hour or two to spare, I can’t think of a better way to while away the time. You don’t have to be a fan of football shirts to enjoy it, but it probably helps.

Strip! How Football Got Shirty is at the National Football Museum until Sunday 7 June 2020.