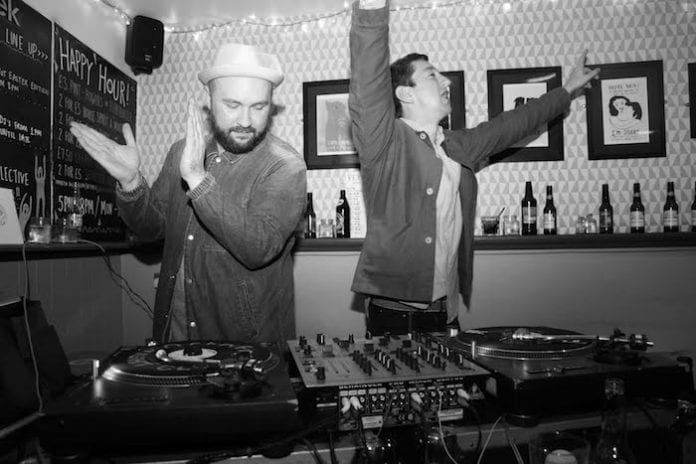 Manchester DJ collective Peek a Groove are celebrating their first birthday on Saturday 9th December with an all-day charity fundraiser event at Dulcimer, their Chorlton home-from-home.

Starting at midday and going through to 2am, they’ve enlisted 20+ of Manchester’s finest local DJs to supply strictly vinyl-only grooves at their fundraiser for Reach Out to the Community.

There’ll be some top-notch vinyl stands supplied by the likes of Ancoats’ Planet Rock Records and Preston’s Dig Deep, plus a few extra non-musical surprises to get your teeth into too.

All proceeds raised for ROC will be used to provide support to rough sleepers and other vulnerable groups in the Chorlton area.

We caught up with Peek A Groove founders Andy and Maxwell ahead of the event to talk about turning one and how we can support our communities better.

Can you tell us a bit about the Peek a Groove collective and what you’re about?

Andy: We’re about the city and the people in it. We haven’t booked any big DJs yet. It’s a growing collective heavily rooted in Manchester but it may spread out. Who knows?

Maxwell: Inclusive, like-minded bunch! We started with a core of eight and that has grown as we’ve expanded. It’s about bringing people on board, both DJs and dancers.

How you did you guys get together?

Maxwell: We met many moons back – when Andy was Wigan-based and myself Manchester – through a love of good music and decent clobber. Andy moved to Chorlton about a year ago and we decided to launch Peek A Groove.

Andy: It was an idea for a long time. Probably about four years or so before anything happened with it. When I moved back to Manchester again, the timing seemed to make sense. There’s a lot of good stuff happening in the city right now.

Why did you decide to make your birthday celebrations a fundraiser for the homeless this year?

Andy: I think the timing was just right for it. We’re not in it for the money. We just want to throw fun parties. If we can do some good elsewhere in the city while we have a good time then that’s worth it for me.

How did you get involved with Reach Out to the Community?

Andy: I went to volunteer with the charity in their new shop a few months ago. They provide help to rough sleepers and people living in poverty.  It’s truly inspiring and they’re in it for the right reasons.

Maxwell: I’ve seen the Manchester homeless situation get worse over the years so anything we can do to help we are all for. It’s even closer to our hearts snce Reach Out is based in Chorlton.

What can we expect from the record fair?

Maxwell & Andy: We have a few different stalls on actually. Planet Rock Records, which is based in Wellington Mill in Ancoats, Preston’s Dig Deep Records and also the wonderful Lord Chester with his Mood Mosaic, all of whom we are sure will bring an array of interesting stuff. On top of that, we have three other stalls who aren’t selling vinyl but you’ll have to come down to see who they are. One, in particular, we are very excited about.

Who else can we look out for in the line-up?

Maxwell & Andy: It’s pretty much an ‘anything goes’ approach to the music. Having said that, the line-up we have picked totally get it the way we do so it’s all good. It’s important for DJs to do their own thing for sure. We can’t really pick any favourites.

Apart from Dulcimer, where else do you like to play and party in the city?

Andy: I play at Cottonopolis every Tuesday and then a few other semi-regular slots dotted around. It’s important not to overdo it as I still like to go out myself. I think the White Hotel and Soup Kitchen are my solid faves for club nights. Definitely, Band On The Wall for live stuff as they book all my favourite artists and it’s the best sound.

Maxwell: As and when I get booked! I’m lucky enough to get asked to play overseas sometimes and every couple of months I try to get to somewhere in Europe with decent events on. Manchester-wise, I think the lads at So Flute are doing something really special and Ghetto Child keeps booking guests that are very much my bag. Red Greg recently, was top.

Where else can we catch you playing out over the Christmas period?

Maxwell: Dulcimer again! Ha. Something brewing at a bar in NQ but that’s still being firmed up at the moment so I’ll not reveal just yet.

Andy: For Peek A Groove, this will probably be it now until Easter next year. I’m really looking forward to playing on New Year’s Eve at Electrik in Chorlton though!