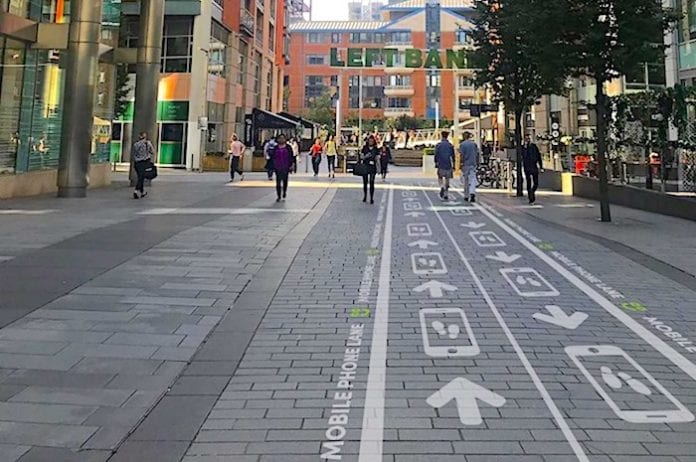 We’re all guilty of it, and yet, isn’t it so annoying when someone nearly walks into you because they’re too busy looking at their phone?

Spinningfields bosses certainly seem to think so. After all, they’ve just announced the introduction of a new ‘slow lane’ in Hardman Boulevard.

It will be temporary and has been designed specifically for those walking whilst on their phone. But there certainly seems to be public support for more policies like this going forward.

Active as of tomorrow (albeit for one day only), the slow lane looks to help busy workers text, email, SnapChat and Instagram without fear of accident. Whether it’ll prove successful, we’ll soon find out.

Who knows? This slow-walking lane could catch on. And it could be a very good thing, too.

The concept has long been called for in Manchester, having already been trialled in neighbouring Liverpool last year with great success.

The initial Liverpudlian trial followed a survey by Argos which found that 47% of British people found slow walking the most irritating aspect of high street shopping.

And China is in on it too, having introduced its first 100ft mobile phone sidewalk back in 2014.

We certainly complain enough here about people walking around on their phones. Particularly on Market Street, where getting from one end to the other often feels like a game of chicken.

Bring it on, we say. We can’t say whether it’ll be the solution – but at least it will kickstart a much-needed conversation.