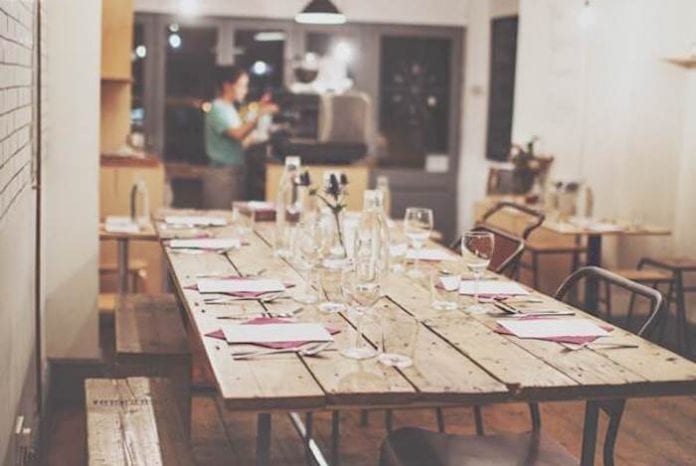 Trove, the Levenshulme cafe that’s been a haven for quality brunch (namely their astonishingly good eggs benedict), coffee and sourdough bread since 2011, is set to extend its opening hours with the launch of a new evening menu.

“We’ve been hoping to have an evening menu for some time but we’ve been waiting to extend the cafe. Now we have an alcohol license it makes sense to get going with it,” says co-owner Katy Saide, who will be extending the bijou cafe’s opening hours to 10pm on Fridays and Saturdays.

“From 13th August it will be small plates of interesting, seasonal food combos. The menu will rotate with the seasons, same as the day cafe menu, utilising the organic produce we get from Manchester Veg People, plus seafood from Easy Fish in Heaton Moor. The same ethos will continue into the evening with local beers, vegan wines & cocktails with an English vibe.”

Katie and husband Marcus are pressing ahead with the plans despite the setback of an unsuccessful Kickstarter campaign last year to double the size of their Levenshulme site.

“We are still intending to expand but our building is in the middle of being sold and we aren’t allowed to do any building work until the contracts have been signed. We have had to be very, very patient”.

Expansion plans may be on hold but the team successfully launched their stall at Altrincham Market this year, and although they aren’t able to bake on site, Trove’s infamous pastries, sourdough bread and Heart and Graft coffee are all available.

Despite the success of other eateries like The Buttery (formerly POD), Trove are surrounded by a large number of takeaways – one of a number of issues including empty units and difficult landlords which local groups are continuing to fight in order to improve the district centre.

Unsurprisingly, Trove have been nominated for two awards at this year’s Manchester Food and Drink Festival in the categories ‘Best Food and Drink Retailer’ and ‘Coffee Bar or Tea Shop of the Year’.

So it’s good news for Levenshulme locals and with optimism around future expansion, it seems Trove are blossoming in the suburbs as the city centre experiences several closures.

Alongside their new evening menu, Trove will continue to host local supper clubs and showcase the best local independents around.