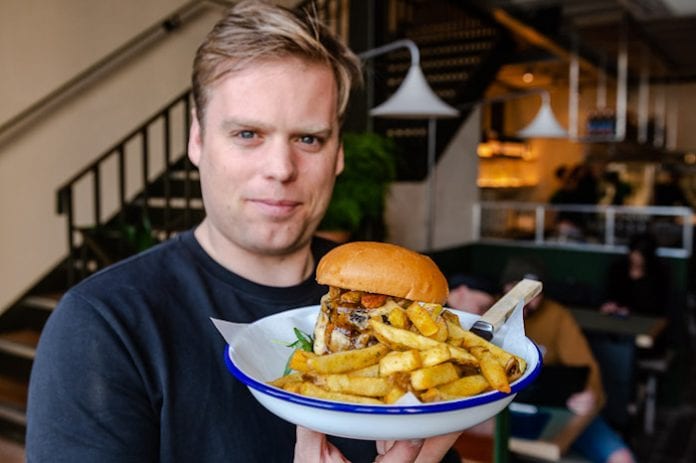 Honest Burgers, the gourmet burger chain famed for their for their no-frills 100% British beef patties made in their own butchery, are opening today on Bridge Street.

To celebrate, they’ve created a special Manchester burger, which will only be available in the new restaurant.

So what’s it like? We had a sneak preview. 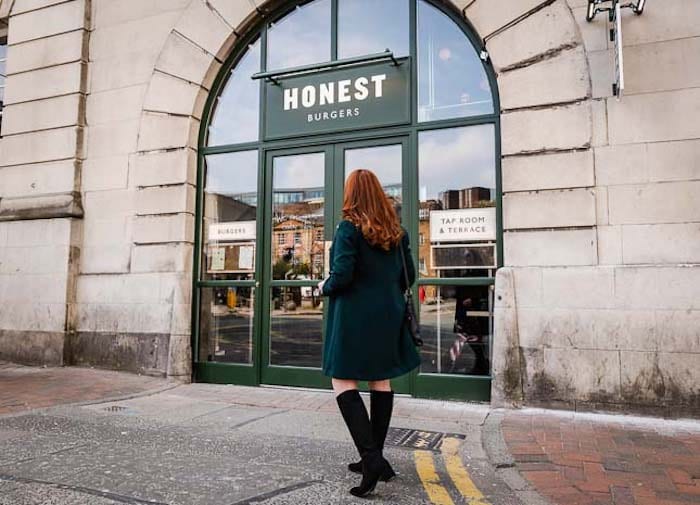 Collaborating with local producers, the Manchester special includes an Honest beef patty (which you can double up if you like), Bury black pudding, Runaway beer cheese sauce, mini roasties, bacon gravy, rocket and pickles.

As with all of Honest’s burgers, the beef is served pink as standard (or however you prefer it) and comes with homemade rosemary salted chips included for £12.50. 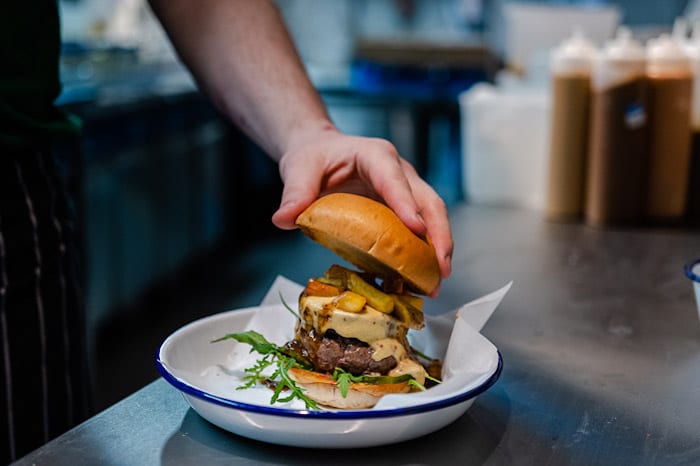 It’s big, and messy. The molten beer cheese sauce and bacon gravy are oozing out over a thick slab of Bury black pudding.

It’s tall, but you can fit it in your mouth for a bite of everything, too – there’s no need for knives and forks, though napkins come in handy.

It’s all very rich, and it’s packed with big, bold flavours. But the peppery rocket and pickles do a good job of cutting through the richness. And the beef is still the star, served pink as standard – or cooked through if you prefer. 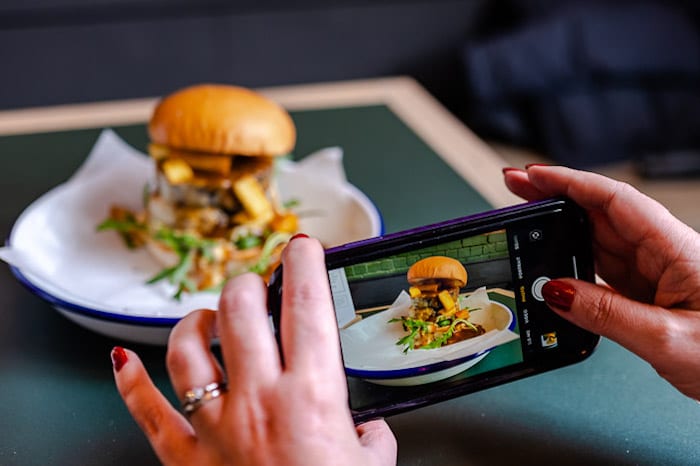 “We always look to do something local,” says Honest’s Philip Eeles, who co-founded the brand with Tom Barton in Brighton in 2009.

“And we know you guys love your gravy. We went through 35 litres of the stuff, I’m told, at our week-long Northern Monk pop-up! That was a new one on us.

“We’ve even had to get some special kit just for the gravy, which doesn’t exist in any of our other restaurants.” 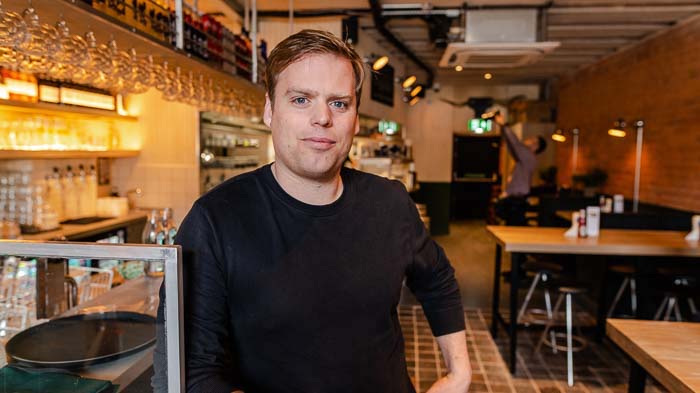 And what about the rest of the ingredients?

“We’ve never done one before, but we really wanted to use Runaway beer in there. It gives it a little bit of bitterness at the end. And there are local cheese curds there, too.

“It’s got a bit of a Sunday roast vibe.”

He hopes Mancunians will appreciate the local special, which will also be available with a gluten-free bun on request.

“You’re going to get messy eating it. But it’s really tasty.” 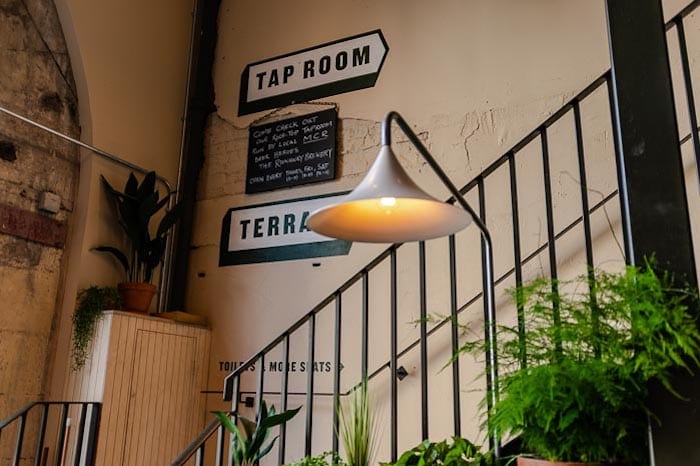 There’s a special beer just for Manchester, too, created by Runaway.

“We’re big on beers, so it’s great to have a local brewery on board, and they’ve already created a beer just for us,” says Philip.

“When we heard Honest were coming to Manchester our mouths were already starting to water – but getting to join them in their new space on Bridge Street is a real privilege,” says Mark Welsby from Runaway Brewery. 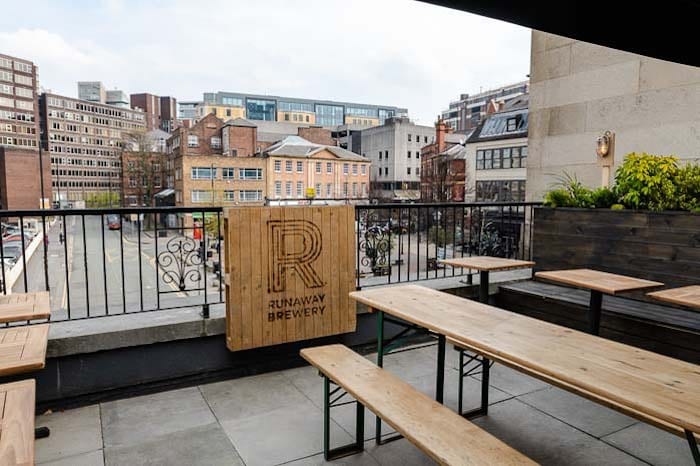 The new restaurant may have a Manchester special burger and beer, but they’ve not gone overboard. There are no bees here, or Hacienda themes.

“We were absolutely adamant that we weren’t going to come up here and not be ourselves,” says Philip.

Though the playlist has in fact been curated by Manchester’s Vinyl Exchange.

“I mean, there may be some Happy Mondays or Stone Roses on the playlist – these guys are from Manchester, after all,” says Philip, gesturing towards the Manchester staff.

“If they want to play Manchester tunes, I can’t stop them, can I?”

Honest Burgers will open at 36 Bridge Street on Monday 15th April from 5pm. 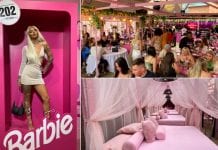