Some of the successful designs for the Bee in the City trail have been revealed for a sneak preview of what to expect when it opens in July.

Over 100 giant sculptures will pay homage to some of the city’s most popular icons and, as you might expect, Manchester’s music scene is the inspiration for some of them.

I Wanna ‘Bee’ Adored by Lesley Hamilton sponsored by Deloitte is a lemony creation inspired by the Stone Roses’ debut album.

Justin Eagleton’s Hac ‘Bee’ Enda sponsored by The Printworks is a nod back to the days of 90s Manchester whilst Amy Coney’s 24 Hour Party Bee commissioned by SJM Concerts will also be brightening up the city this summer.

Manchester is also the home of one of the UK’s best loved and longest running soaps. Hilda Bugden pays tribute to one of the soap’s most memorable characters – guess who – whom artist Lee O’ Brien has immortalised in bee form. Lee has also designed a Queen Bee sculpture sponsored by the Royal Exchange.

Virgin Trains have gone for gold with Au Bee, covered in a chrome sheeting by the Hydro Monkeys.

The Museum of Science and Industry will be showing off its Industrial Bee created by Paint By Pigeons. The metallic design celebrates the important part Manchester played in the industrial revolution and focuses on the cogs and cycle of production.

Transport for Greater Manchester (TFGM) has teamed up with local artist Dave Draws, whose famous Manchester Doodle Map covers one of the bees.

When the trail ends, the bees will be auctioned off to raise money for The Lord Mayor of Manchester’s We Love MCR Charity.

The finished bees will be on display in all their glory at key locations across the city from 23 July until 23 September. 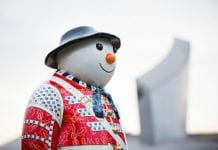 Snowman sculptures by acclaimed artists go up for sale in online charity auction... 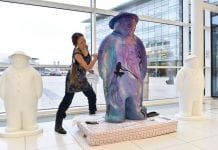 A new festive sculpture trail is coming to MediaCityUK – and it’s al... 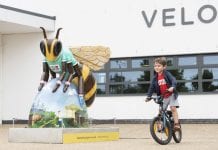