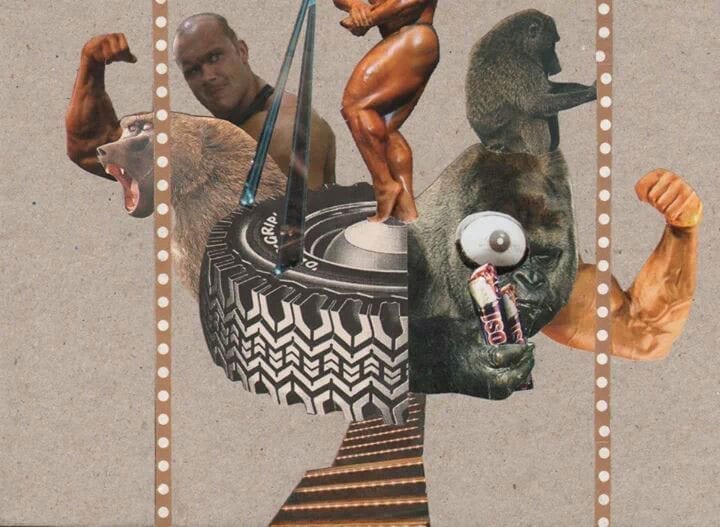 From Friday 7th February until Wednesday 5th March, artistic duo The Weeping Bakers will be exhibiting their latest collection, A Slice of Heavenly, at the Northern Quarter hangout.

A bespoke collection for Kosmonaut, A Slice Of Heavenly is a journey into the unexpected, wonderful world of collage art, which launches with an evening view on Friday 7th February.

The collaborative artworks feature a robust array of characters throughout including wrestlers in spandex, aliens from other planets, famous film stars and even The Hoff. The recurring figure of King Dadunga, a stately ape with a bulging eye, indicates the absurd, playful yet inventive theme The Weeping Bakers follow in their work.

This latest exhibition is a result of an on-going collaborative project whereby The Weeping Bakers exchange collages via post. Beginning each collage with a figure or scenario they then send their creation on for the other to complete, producing hilarious and unexpected results.

The Weeping Bakers, comprised of Joseph Draper and Edward Wakefield, first met whilst studying together in 1996. They share an inimitable sense of humour that pours over their drawings, occasional dabbles in musical ballads and most recently, collages.

The month long exhibition, running until Wednesday 5th March, will be launched on Friday 7th February at 5pm. Resident DJ Pasta Paul will be providing the soundtrack, and drinks will be provided on arrival.