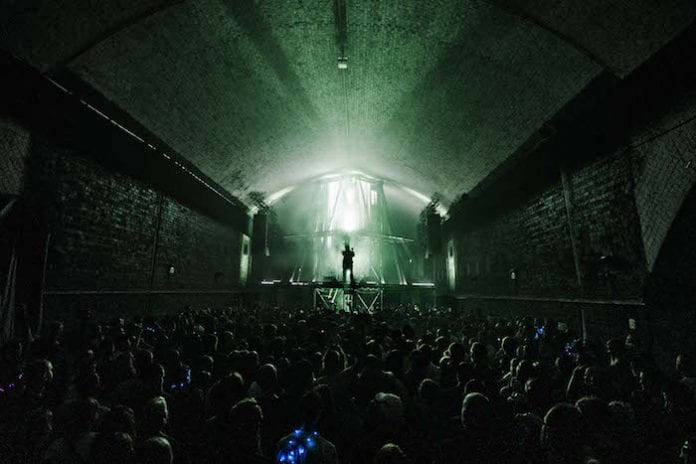 Skepta thrilled audiences this week with a series of futuristic raves held in a secret Manchester location.

Those heading down to catch a glimpse of the DYSTOPIA987 project were promised an insight into Skepta’s “singular vision of the future” – and he didn’t disappoint.

During the build-up to the shows, the details had been kept quiet. However, it was pretty clear from the off that this was never going to be just any old grime show.

Billed as an insight into “Skepta’s singular vision of the future”, the dynamic series of raves saw the grime MC and producer collaborate with writer Dawn King, merging grime with theatre to create a self-contained ‘future city’ inhabited by a cast of wavey, dystopic performers.

“It’s like some From Dusk Til Dawn and Blade Runner type shit. You know? Mad Max future shit,” the artist teased NME in an exclusive interview on Wednesday.

From the gritty, neon-soaked vibes of Ridley Scott’s Blade Runner to the painted ruffians of George Miller’s Mad Max, the influences were clearly present when we went down on Wednesday.

The night began with us being asked to meet in an out-of-the-way location next to the Mancunian Way, with just geographical coordinates to guide us.

Once we’d found our way, we were shepherded towards the rave by futuristic-looking stewards in black jumpsuits and tribalesque UV face paint – an experience that felt somewhat menacing, and yet, at the same time, not menacing at all. 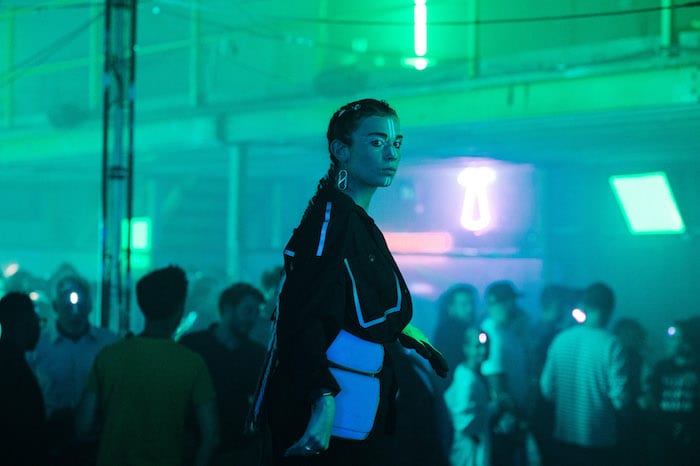 They gestured and smiled at us invitingly, speaking soft encouraging words. After ten minutes or so, we emerged round the back of the abandoned train station.

A strictly no-phone event, before we transitioned into the venue one by one our devices were locked up in magnetically-sealed pouches with strict instructions to only use them in the designated zones.

Then up the fire escape and in we went, stepping through PVC strip curtains into a dark and cavernous space penned in with 8-foot high crowd barriers.

The ravers instructed us to stand with our backs to the railing. Bright strobe lights flashed in our face and an invisible voice boomed “I see you” out of the darkness, before instructing us to turn around and face the fencing.

Again, the blinding lights hit and the voice repeated “I see you” before we were steered on through and handed tokens from Dambrin_IRS, the Big Brother (1984 not Channel 4) character behind the booming voice, by way of ‘thanks’. The whole experience felt like some sort of pre-rave hazing.

Clutching a purple token, we made our way through another PVC-sheathed doorway and, after being handed a pair of wireless headphones instructing us to “look around”, talk and smile to our fellow ravers, set about exploring the uncanny, futuristic space.

As we wandered through the neon-soaked metropolis Skepta and the team had created inside, we were confronted with an array of stalls – each marked by a coloured square, which we soon discovered related to our tokens.

There were stations with face painting and hair braiding, a souped-up campervan flogging everything DYSTOPIA987 from bucket hats to hoodies, sunglasses, and even a pair of high top trainers, and a guy gripping an infrared camera taking pictures against a cold cement backdrop. His card was being taken every thirty minutes, he informed us, to project the images onto the wall next door.

As we approached the purple square with our token, we were told we’d been selected by Dambrin_IRS to have a ‘personal experience’.

“He wants you to connect with others,” we were informed, before being offered the choice of a high five or a hug. Feeling a tad awkward, we took the high five.

“Ok, now you’ve been selected by Dambrin_IRS to have an extra special experience.”

We were swiftly marched to the other end of the room and escorted through a door marked with an ominous red square where we were handed a future-looking VR headset and armband and instructed to explore.

Designed to mimic the effect of tripping on acid – the hallucinogenic drug which Skepta and ASAP Rocky notoriously tripped on whilst recording hit Praise The Lord – it was, truly, mind-bending.

At first, all we could see were small neon boxes breaking down the shapes of the walls. But then, just like the real thing, the more we relaxed our mind and leant into it the more we saw. Crazy. 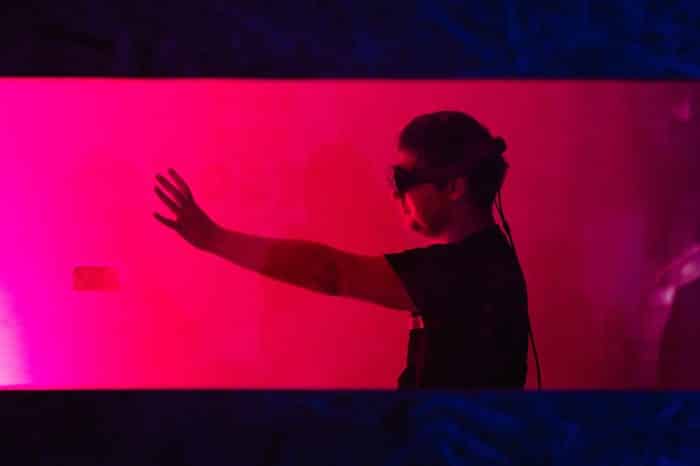 Using our hands to draw sparkling shapes in the air in front of us, messages telling us to ‘break free’ came into our periphery. Strobes of neon light fell through the ceiling, and it almost seemed we could see the air moving, as if there was a draft of wind coming through and it was visibly vibrating.

But as quickly as it started, it was done. Shut Down played through the headset and more words appeared telling us it was over.

Stepping back out into the rave, our mind felt refreshed and open to new possibilities. Keen to explore further, we moved into the second and most oppressive of the three spaces.

Militaristic industrial techno pounded in our ears as a rig carrying a strobe light, sub woofah speaker and projecter ran vertically along the ceiling, projecting deconstructed infrared images and animated text up and down the looming warehouse walls.

And here we stayed, like cattle in a holding pattern, feeling every vibration as the swoosh of the rig soared up and down overhead and guest DJs Sita Abellan and KESH dropped brutal hit after brutal hit.

Then, with maybe an hour to go (although it was hard to tell, with no phone and no watch), a growing realisation spread over the crowd that it must nearly be time for Skepta’s set. 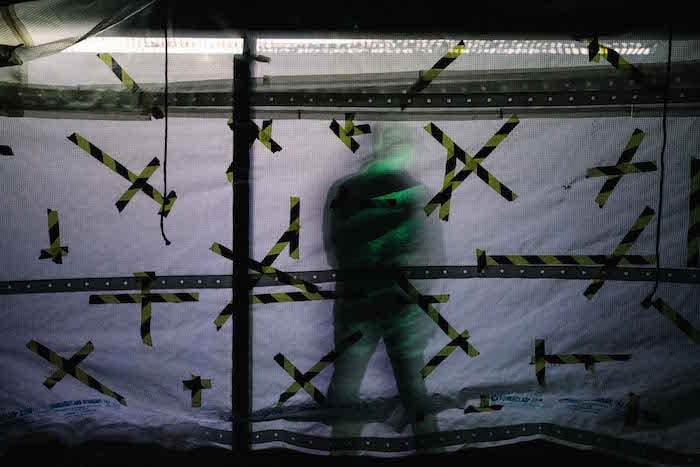 There were two entrances, at either end of the long warehouse space, and people started to crowd around them excitedly. As the curtain came down, swathes of fans charged in manically, quickly gathering their bearings and sprinting towards an oppressive towering skyscraper structure on which Skepta was to perform.

He didn’t make us wait much longer, emerging from the shadows to drop Praise The Lord with a rallying cry to “Free ASAP Rocky”, who for the past two weeks has been locked up and surviving in inhumane conditions inside a Swedish jail.

Wild mosh pits ensued, but as we were thrown around with the crowd he asked “Do you feel safe?” telling us to “pick each other up!”. 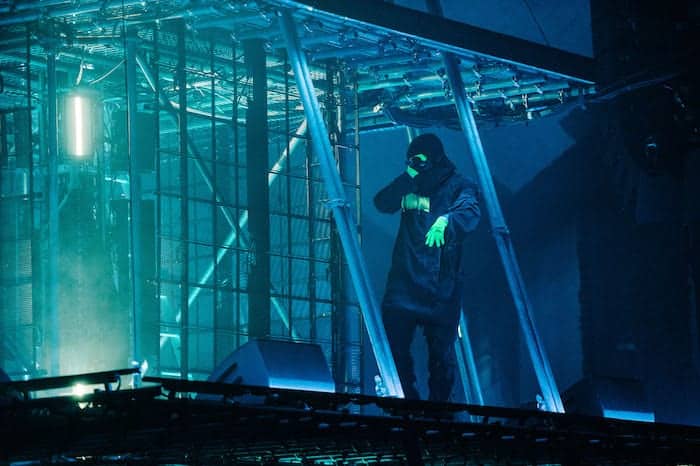 As he reeled off a mixture of old classics alongside new hits from newly-released album Ignorance is Bliss, the atmosphere was electric. The crowd moved as one, skanking in unison, undistracted by the need to capture everything on film for their absent Instagram followers. It was wonderful, like travelling back in time.

And then, just as suddenly as he had appeared, he was gone and it was all over. No encore, just bright lights and bouncers steering us towards thee exits. Pure power.

A truly groundbreaking experience, DYSTOPIA987 was a show to remember. It seems that grime is getting artier by the day, and we’re loving it.

First Stormzy gets political and puts ballet dancers on for his main stage set at Glastonbury. Then Skepta merges theatre and music to create an immersive, futuristic dystopia rave. Whatever next?

The research and development behind the technology at the event was funded by the Audience of the Future programme. Delivered by UK Research & Innovation, the programme is the UK Government’s £33m investment of public funding to grow the UK’s leading position in immersive experience production.