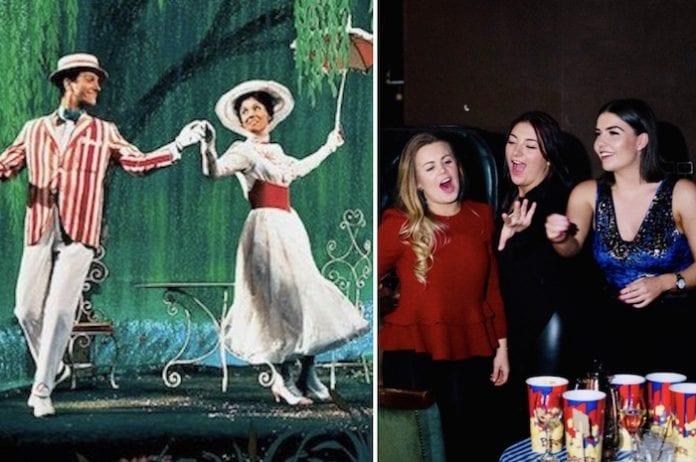 Growing up, Mary Poppins was one of those childhood classics you could watch over and over again without getting bored.

The 1964 film starring Julie Andrews is a staple of the British film industry, so much so that it was recently remade with Emily Blunt in the iconic role of Poppins.

But in light of the new movie’s release, organisers of The Bottomless Singing Cinema thought that it was important that the iconic film that made Mary Poppins a household name gets some new attention.

Traveling around the UK with the concept, the pop-up cinema booze-up is returning to Manchester on 24th August.

Taking over the Mint Lounge in the Northern Quarter, the event sees fans of the film indulge in completely unlimited drinks and popcorn for the duration of the whole movie.

Step back in time to Edwardian London with magical nannies and chimney sweeps aplenty, while fully indulging in bottomless bevs including gin, vodka, rum, red and white wine and beer.

If you’re feeling particularly frivolous, there is also a Sparkling Package upgrade available. Pass us the fizz!

Costing just £30 per person for the two-and-a-half hours duration, guests will be treated to personal waiter service so that you can focus all your energy into channeling your inner Poppins for the musical numbers.

Promising a truly immersive environment, dust off your flat caps and parrot umbrellas because Mary Poppins is flying into town. Only this time instead of a spoonful of sugar, it’ll be a boatload of alcohol.

With three slots available throughout the day, whether you want a daytime session or an evening soiree, choose from 12pm, 3pm and 6pm.

All that’s left to do now is buy yourself a ticket before they sell out!