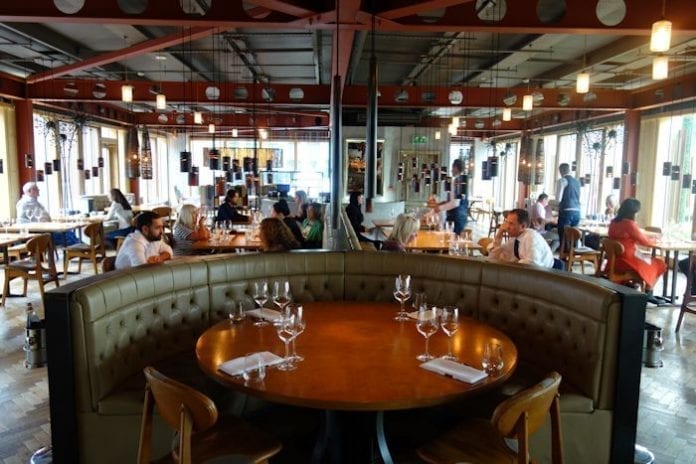 Have you ever read a restaurant review and disagreed with it? Or been to a restaurant and had a completely different experience from your companion? She Says, He Says brings you two reviewers for the price of one. She is a bit of a foodie. He just likes his food. They share the same dishes and make their own notes – and strictly no conferring.

So here we are, October 2016 and still no Michelin star for Manchester. To be honest, it’s become a bit of a bore. I’ve written about it for the past two years but this year instead of writing about it yet again I want to celebrate some of the great restaurants we do have here. And what better way than by going to one of Manchester’s finest.  It is one of the few restaurants in the country with 4 AA rosettes which means it’s ‘amongst the top restaurants in the UK where the cooking demands national recognition’. 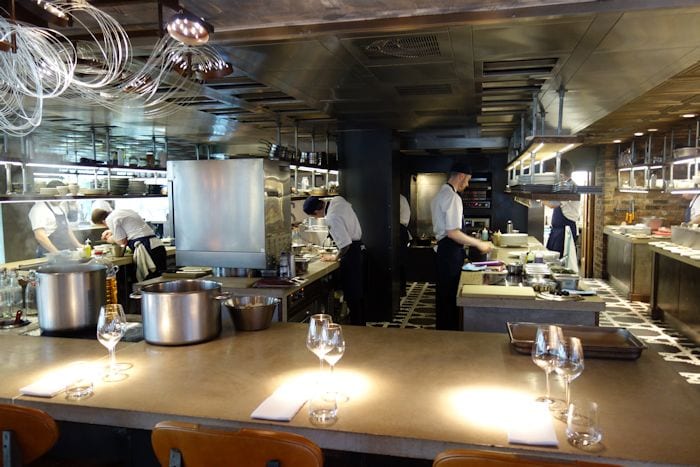 This place may not have a Michelin star but chef patron Aiden Byrne does – and he actually cooks here and painstakingly designs every element of the menu with his team. This is, of course, reflected in the price. Fancy late night dinners here may be the stuff of dreams for most of us but lunchtime outings are much more affordable. You can get a three course lunch here and still have change from £30. Or two courses for £22.50. Clearly, other people agree because although it was pretty empty when we arrived, it was busy by the time we left. Probably the busiest place we’ve been to at lunchtime.

She Says: These three appetisers are presented to get our taste buds going before we even get to the starters. Baked potato soup stood out, creamy with rich foie gras and salty chicken skin which I love. I couldn’t taste the pink fir apple though. Our scallop was plump and worked with the sushi vinegar and the green peppercorns which tasted similar to pink ones but less overpowering. The squid ink rice cracker was a joy for the texture alone, and balanced all three appetisers brilliantly. The cured lemon sole on there was chunky and fresh with a nice hint of basil.

He Says: I was informed by my companion who is so much more knowledgeable than I am that that this course is to get our taste buds going. In other words, it’s the equivalent of a bowl of dry roasted peanuts or twiglets. But it was much better than that. The scallop was soft and moist and tasted of the sea and the kohlrabi added crunch. It was served on what looked like a bed of grass which I wasn’t sure if I should eat or not. I decided to play it safe and gave it a miss. The flavours in the soup dish played havoc with my taste buds and left them in a state of shock. The squid with rice crackers was like a posh crispbread and was served on a slate. I’m not a fan of slate. Give me a plate every time. 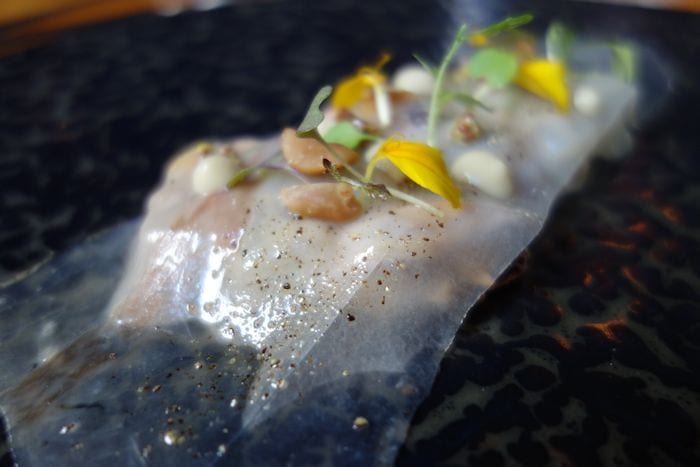 She Says: This was my favourite dish of the day. It looked and tasted stunning. Cured in salt and sugar the halibut did the talking and was the star on the plate, with the Iberico pig lardo beefing up the flavour. I’m never sure the colourful flowers add flavour but they look so pretty.

He Says: This looked like an abstract work of art and was so beautiful it was a shame to eat. It looked like the tiny grave of a halibut covered in ectoplasm with flowers scattered on top by mourners. In fact, if that was its name and Damien Hirst entered it for the Turner Prize, it would probably win. Almost raw fish-like flavours. 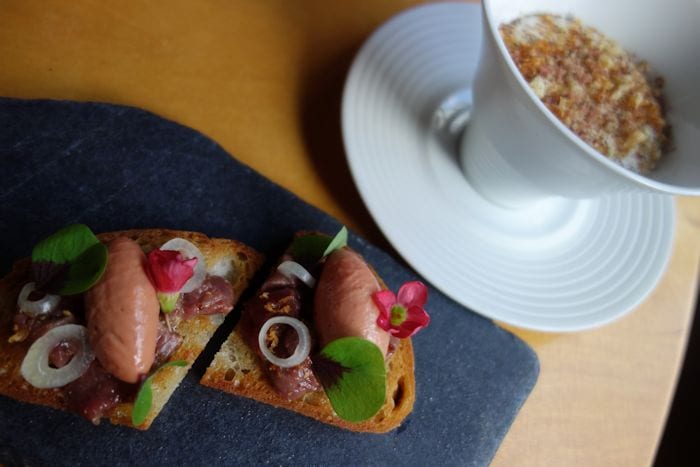 She Says: I’ve never eaten minced venison but in this truly indulgent posh pie it worked like a dream. So brothy and intense with the creamiest celeriac mash and crispy onion adding texture on top. I can guess ‘He’ will love this dish as it’s such an accessible and accomplished pie. The liver parfait was divine, smooth, and served on the crunchiest, naughtiest fried croute. Another fantastic starter.

He Says: This was one of the stars of the show for me. Like a posh cottage pie with knobs on – but not literally, of course. Moussey pie beautifully complemented by crispy croutons. Utterly delicious.

Main Course: Casserole of monkfish and cepes with cockles and thyme 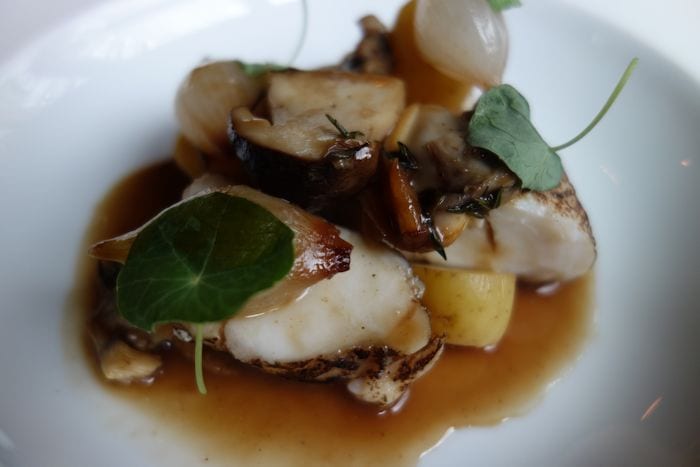 She Says: From its description and presentation on arrival I would have thought this would have been the best dish of the day. Unfortunately, the balance was all wrong. Although the monkfish was cooked well, the overriding flavours were the cepes and thyme, meaning the fish got a bit lost. It could have done with another element to freshen up the earthy and one-dimensional tone dominating the plate.

He Says: Tender, served with potatoes and gravy. Nice enough but not my favourite. 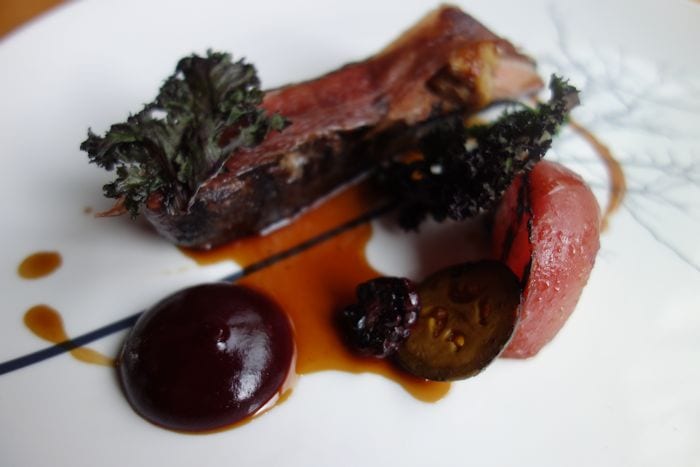 She Says: Back on form, another show-stopping course. Our duck breast was cooked perfectly, with some beautifully crisped fatty skin. With the fresh blackberries, and the fermented plum, beetroot and juniper puree and jus, a great combination. And the crispy kale was salty and crisp like seaweed.

He Says: The other star of the show for me. Totally exquisite and bursting with fatty flavour. Not a fan of sweet and savoury so just a cursory dip in the sauce.

She Says: How many ways can you treat a carrot? Well quite a few evidently from the various concoctions on our plate! Cake,crumbly crunchy bits, gel, puree and crisps. All so colourful and sweet. The cinnamon coated walnuts were a treat too and I don’t normally like cinnamon! But the cream cheese was a bit watery and the dessert could have been so much better if it was thicker and creamier.

He Says: I normally boil my carrots or save one for the snowman’s nose. I’m impressed by what they’ve created with this humblest of root vegetables. 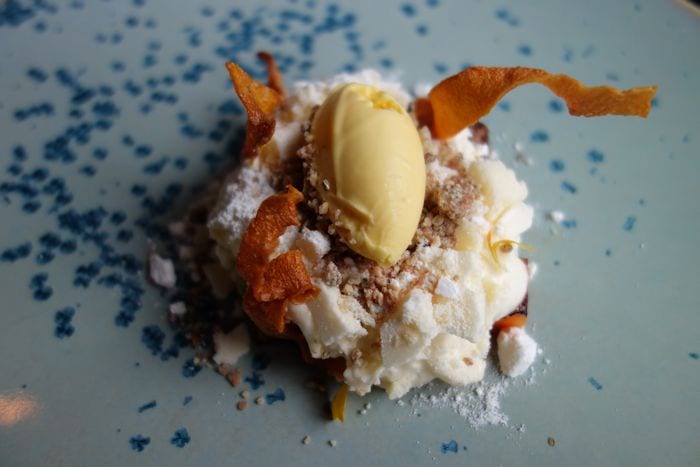 She Says: These flavours were made in dessert heaven although I didn’t like the texture of the whole pieces of cold pumpkin in there. It was only a minor complaint as the entire dessert was devoured with gusto it tasted so good. 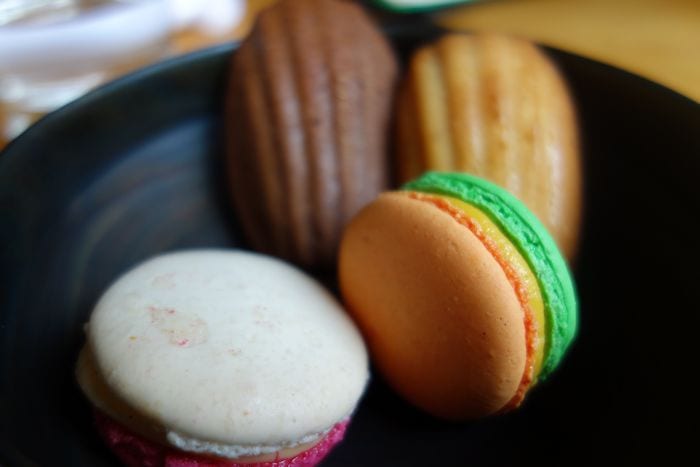 She Says: Although a little sweet for me, macaroons are a fine art I know, and these have got to be some of the best I’ve eaten. Light, fluffy, slightly chewy, not to mention the fact they look delightful. The madeleines were also light and served warm which I loved, but the chocolate one wasn’t nearly as good as the classic plain one.

He Says: I’m not a huge fan of macaroons but these were very good-looking and very tasty, too. The madeleine is the famous little cake that inspired Proust but sadly they didn’t work for me. I preferred the plain one to the chocolate which was lacking in chocolate flavour. I was a bit confused by the chocolates they brought to the table at the end. There were loads of them and I thought they were going to leave the lot but we were asked to choose just one. Good job really because, contrary to my expectations, I was really rather full by this time.

We drank a Bourgogne Chardonnay Simmonet Febvre (£8.50 175ml) that could handle all the big flavours coming our way. But we much preferred the red today, a gloriously fruity Rioja Crianza Bodegas Martinez (£7.75 175ml). 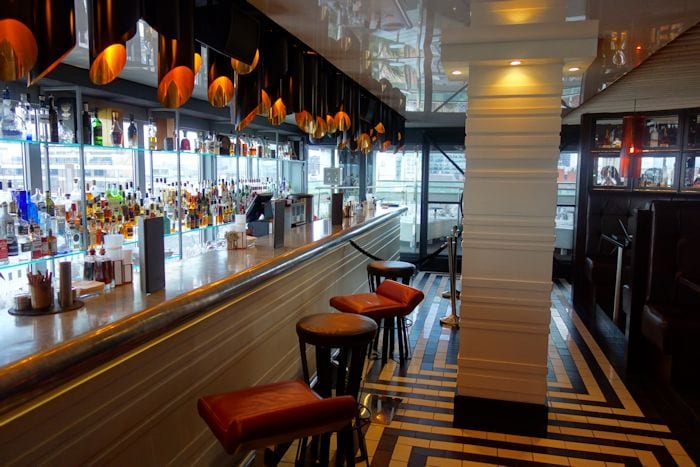 She Says: This was a fantastic rollercoaster of a lunch made even more memorable by my companion’s positive response. He was slightly out of his comfort zone at first yet seemed genuinely impressed, surprised, and relaxed – and full by the end of our meal. When it comes to stars, I’m seeing them in every single one of the chefs in that kitchen that prepped our lunch.

He Says: This was my first time at Manchester House because I’m not a fine dining kind of guy. Don’t get me wrong. I love food. I love it so much I try to have some every day. But I tend to avoid this type of establishment for a number of reasons. Firstly, portion sizes. Dishes tend to be more plate than food. I like to see more food than plate. I don’t want to have to buy a bag of chips on my way home because I’m still hungry. Secondly, I don’t care what my food looks like. If I want to look at a work of art I’ll go to The Whitworth or Manchester Art Gallery. Third, I can’t afford the prices. Having now been, I have to say I’ve changed my mind. This is a really special place and affordable, too, if you go for lunch. And I didn’t even have to buy a bag of chips on the way back to the office.