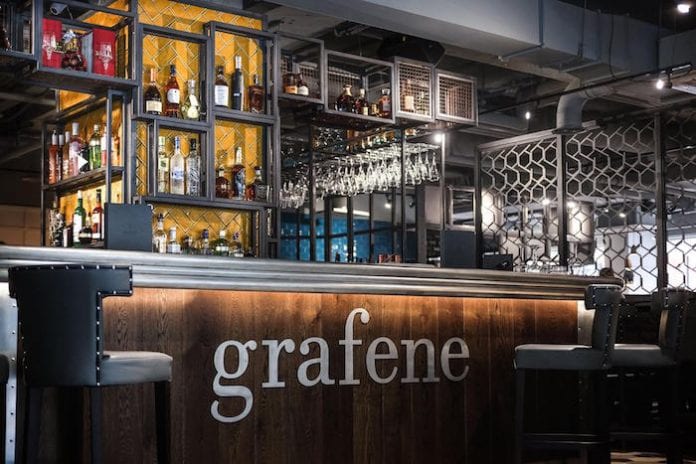 Everybody has an opinion. They used to say ‘opinions are ten a penny.’ Now they’re two a penny. That’s inflation for you. And sometimes opinions are wrong – especially when they are someone else’s opinions. Have you ever read a restaurant review and disagreed with it? Or been to a restaurant and had a completely different opinion from your companion? We have. So with this in mind we bring you She Says, He Says, the first in a series of restaurant reviews by two people. Because two heads are better than one.

Paul and Kathryn Roden opened Losehill House, their four star hotel in The Peak District, nearly ten years ago. With their executive chef, Darren Goodwin, the couple hope to bring a little bit of the country to Manchester at Grafene, their new modern British restaurant. 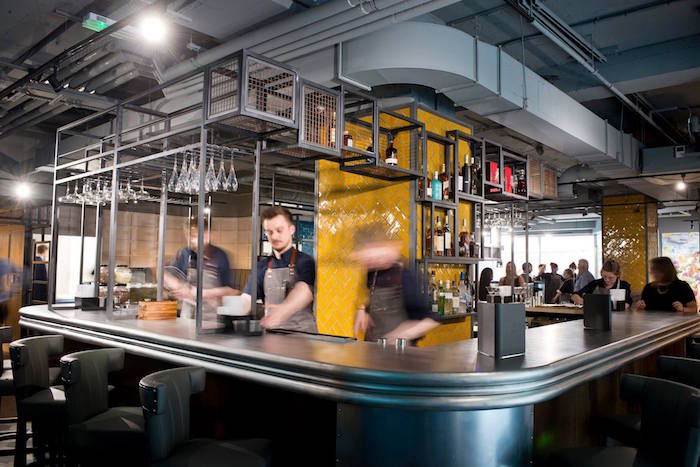 Inspired by graphene, the world’s first 2D material which was first isolated at Manchester University, the restaurant is their food and drink interpretation of this exciting development in science and technology. They’ve spelt it with an ‘f’ for legal reasons and quite possibly to signify ‘food’. It’s not a spelling mistake.

The address may be 55 King Street but you’ll find it on that little walkthrough from King Street to Chapel Walks in what was once Raymond Blanc’s Le Petit Blanc, one of our favourite lost restaurants of Manchester. 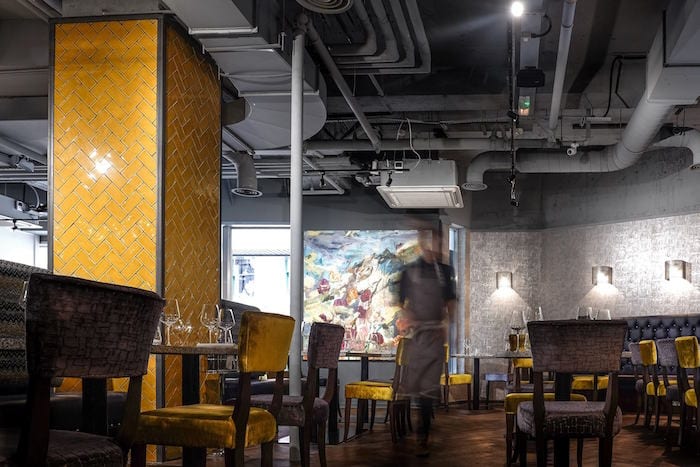 The space seems bigger inside somehow. No expense has been spared. The interior is stylish and modern with charcoal washes and splashes of lemon. It’s evocative of industrial Manchester with bold lines and subtle nods towards the worker bee with honeycomb shapes.

The central bar is impressive and welcoming but the dining lacked a little of the warmth that could be found in their alfresco booths at the front, which is where we dined to enjoy the last few rays of the Manchester summer.

Drinks are very good but on the expensive side. The scientifically-inspired cocktail, Mancohattan (£9), arrived smoking like crazy in its silver coffee pot, tasting like a cross between a Manhattan and Espresso Martini. 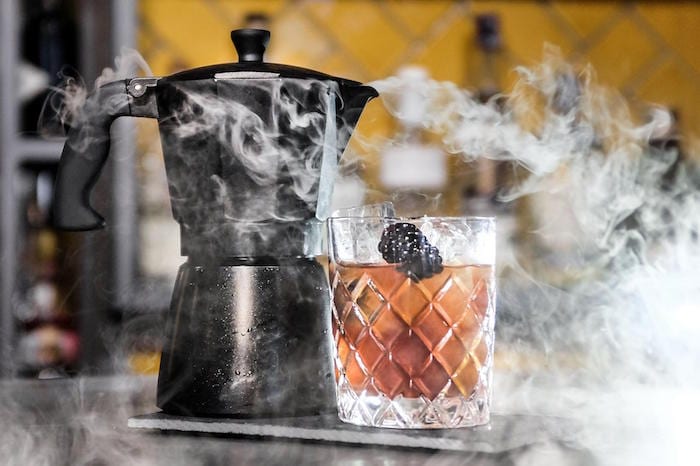 We drank one of the finest white Riojas, Bodegas Luis Canas (£9 175ml), a beautiful example of this grape which was both vibrant and weighty and an unusual pink dessert wine, Stella Bella Pink Muscat (£10 100ml), not as viscous or as sweet as the norm with a slight fizz, fantastic with our puds.

We ordered from their set lunch menu – 3 courses for £23. 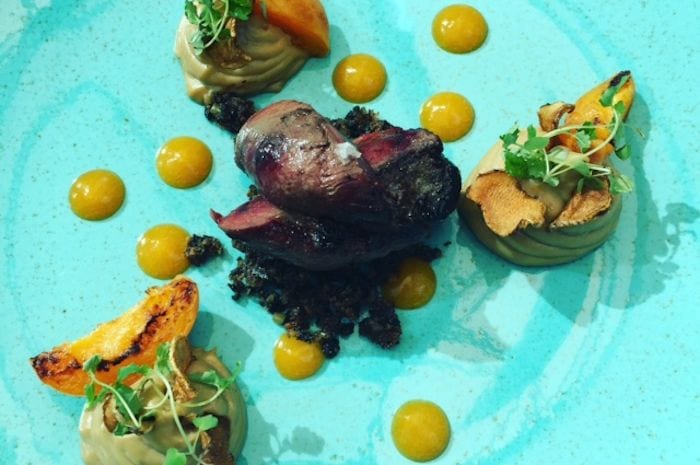 She says: every single element worked on the plate. Pigeon breast was cooked to perfection and its earthy taste brought to life by the cep custard. Apricots added fruitiness, and the Pinot Noir butter smokiness. A fantastic starter.

He says: This was a first for me. I’ve only ever thought of pigeons as flying rats and not something I would like to put in my mouth.  It looked a little livery but I needn’t have worried. Loved it. Tender, flavoursome and worked beautifully with the haggis. 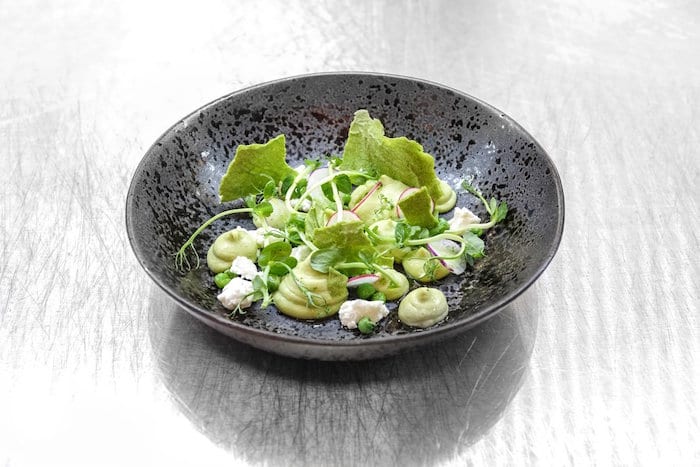 She says: although this looked so elegant and fresh, a little garden on the plate, the taste just wasn’t there. It should have screamed of sweet summer peas, but didn’t. There was also little texture, or any contrasting flavour to the bland lost peas.

He says: This dish was lacking in flavour. A disappointment. 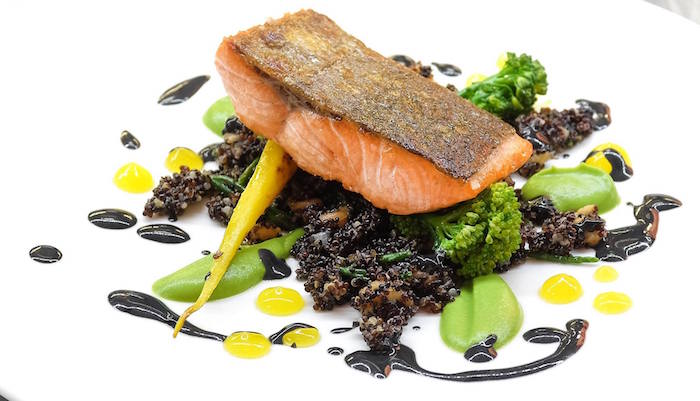 She says: I loved this dish as it tasted of the salty sea with the addition of the potted shrimps. Sea trout was fleshy and melt in the mouth, with a good crisp skin. Although the quinoa with squid ink sauce sounded a bit pretentious, it worked surprisingly well to balance the whole dish.

He says: The trout was ok. Not a huge fan of quinoa. Loved the puree. 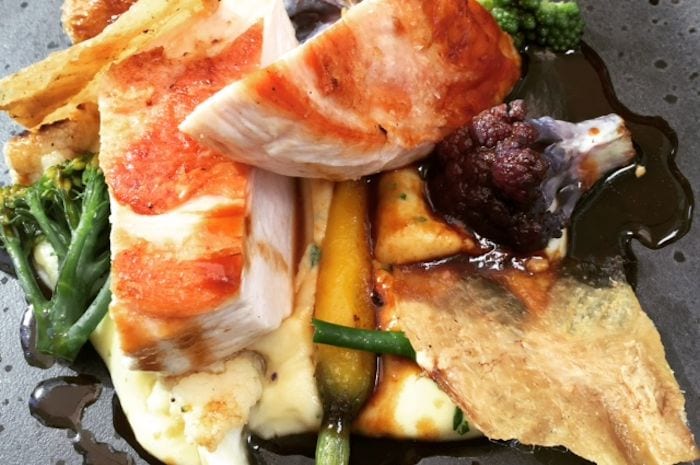 She says: a thoroughly acceptable chicken main course but it didn’t blow me away. Chicken was moist and you can’t beat a bit of crispy skin. But one too many purees on there for my liking.

He says: Loved it. The chicken was tender and succulent, the skin packed with flavour. Loved the puree/s. 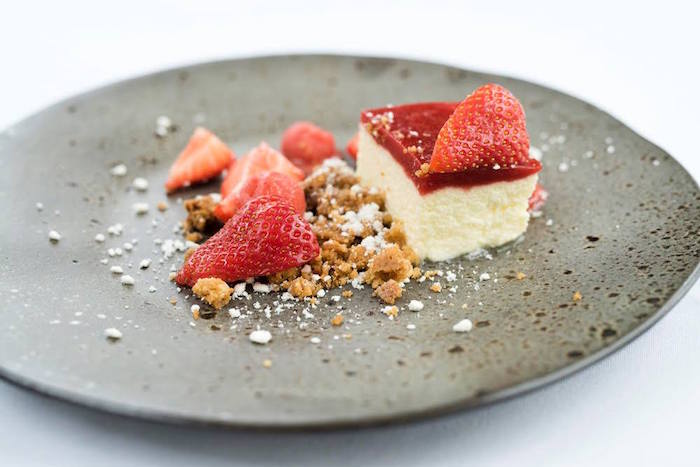 She says: I am nearly always disappointed by desserts. They often feel like an afterthought. Not here. This is where Grafene really came into its own. I should have asked who their pastry chef was as they deserve a mention. This goat’s curd cheesecake was delightful and actually quite simple, with the goat’s curd adding an extra tang. It didn’t need the white chocolate soil though as macademia crumble gave enough crunch. 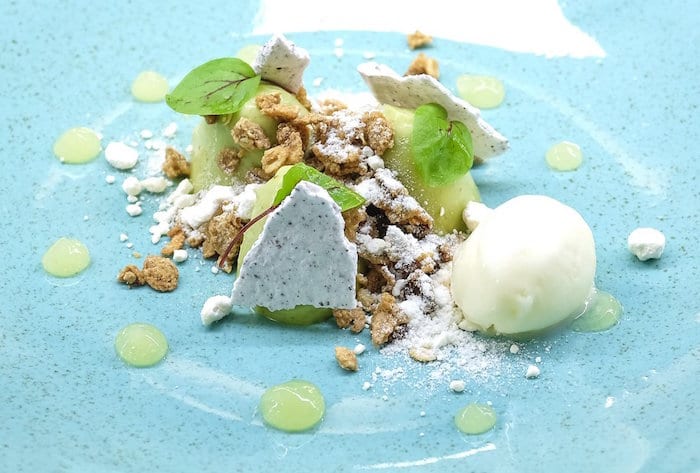 She says: a truly stunning dessert that was intricate and subtle. I grew up with my mum’s sorrel soup so it’s a flavour I love when used well. The posset was light and herby yet prevented from tasting like a starter when eaten with the sweet meringue and crunchy granola. Perfect.

He says: Not sure what a posset is but I loved it. Another great dessert, smooth and creamy.

A thoroughly enjoyable lunch at Grafene. Superb presentation. Drinks and desserts are especially good but some of the savoury courses need a little tweaking in terms of flavour, texture, and the number of components on the plate. 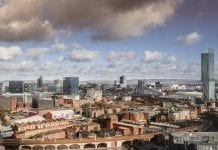 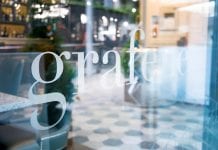 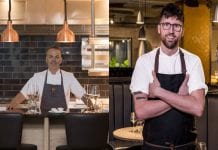