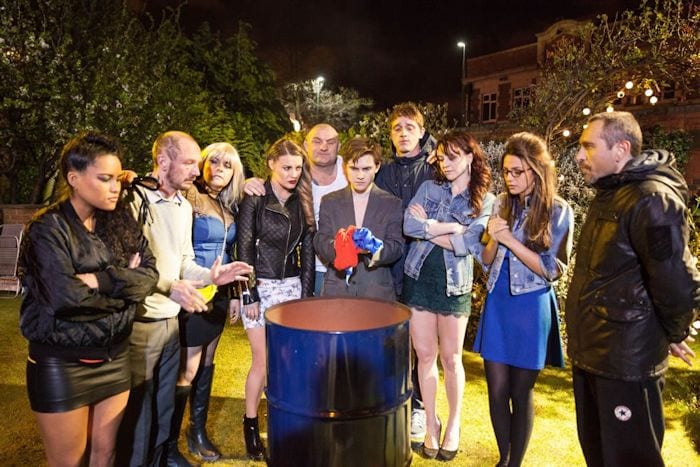 The location is the Owen Street Estate, Salford. The situation is dire. A group of residents owe notorious loan shark Danny Nolan money and don’t have the means to ever pay him back. What unfolds is a plan to bump him off.

That’s the gritty story behind Strangeways Here We Come, a new film shot on a shoestring budget which features everything from Salford backstreets and prison towers to Bafta winners Chanel Cresswell and Lauren Socha, Michelle Keegan, and a soundtrack of local artists curated by Terry Christian.

The self-styled savage comedy was written and directed by Chris Green and premiered at The Printworks this week.

Strangeways Here We Come is his first feature film as both writer and director.

“I got into directing about five years ago,” says Chris. “I was born within half a mile of the imposing Strangeways prison tower and the story is inspired partly by a fear of ending up in a place like that. But it was mainly my experiences while working as a postman in Salford for a few years that ignited the desire to work a narrative through all the bizarre things I saw and make a film about it.”

The film features city streets, tower-block parties around The Precinct, and has even been described by some as Shameless meets Shallow Grave.

It’s taken around five years to get it onto the big screen, but during that time Chris has drawn together a plot, plenty of memorable characters (including a bitten postman, a tattooed taxi driver and a gutsy group of students) as well as off-the-wall scenarios including selfies with a corpse and a particularly rowdy version of pass the parcel.

The inspiration for the film comes from a number of sources, including real local experiences.

“I’m inspired by films like A Taste of Honey and I guess there is a bit of pressure because you’re putting out into the world a view of where you grew up and the streets that made you what you are, so there is a certain responsibility.

“There are scenes in the film where audiences gasp and afterwards they say to me ‘where the hell did that come from?’ and I tell them about how I witnessed the craziest things while plodding around the flats near Salford precinct.”

Bringing it to life is a vibrant cast and crew. Fellow Salford lad Stephen Lord takes the role of lead villain, whilst Chris has worked before with Mark Sheals and Christopher Hargreaves. Jimmy Foster, from the well-known Salford boxing family, plays a former boxing champ in the film, which is produced by Raiomond Mirza.

“It was great to also work with the likes of Bafta winners Chanel Cresswell and Lauren Socha and IFTA (Irish Film and TV Academy) winner Elaine Cassidy, too,” adds Chris.

“Plus the hilariously talented Nina Wadia as well as Michelle Keegan. The film also features Oliver Cooper-Smith who stars opposite Tim Roth in Tin Star and Perry Fitzpatrick from This is England as well as some great up and coming young actors.”

Chris was also keen to include local artists and musicians in the film. He called on presenter and journalist Terry Christian, who helped to curate a soundtrack of artists from Salford and Manchester including The Slow Readers Club, Little Sparrow, From Carbon and The Moods.

“There’s talent in Salford, mountains of it, from film makers to artists, musicians and poets,” says Chris. “Terry Christian curated some amazing music for our film … plenty from unsigned bands, too, and they’re bloody amazing. Some have since been signed, but you think to yourself that they all deserve to be recognised.”

The title of the film is a nod to another band famously associated with the area.

“I was a big Smith’s fan and Morrissey’s lyrics, along with those of Paul Weller, are a big part of what first inspired me to start writing,” says Chris.

You can still catch the film at HOME until Thursday, at various times at Salford Arts Theatre until Tuesday 9th October, as well as a limited cinema release around the country.

“People should come along if they want to laugh. That’s what I want from this film, to make people laugh,” says Chris.

But there’s a hard-hitting message too. “At its heart, Strangeways Here We Come is a film about an oppressed community of downtrodden souls who unite to overthrow a tyrant. We all like to see the underdogs win, don’t we?”