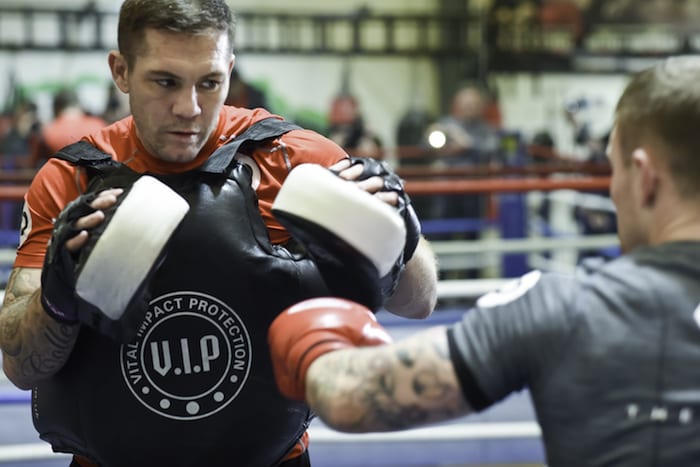 Last year Salford boxing trainer Jamie Moore added his first ‘top end’ fighter to his expanding stable of boxers. Carl Frampton asked Moore to train him for his comeback fight against Horacio Garcia back in November – a fight that Frampton won on points.

“As far as pedigrees go for trainers, I’ve not got one at the top end, so Carl has taken a gamble in that sense,” Moore told MEN Sport.

“He could have easily jumped on a plane and gone with somebody in America, but his dad mentioned me to him. He told Carl that he likes how I talk in the corner and thinks we’d work well together.”

The Garcia fight wasn’t the most convincing – Frampton was even dropped in the seventh. But he did enough to earn a unanimous points victory.

“It’s good fun in here. The camaraderie is brilliant, everyone’s kind of bouncing off each other. There are some very good fighters here. A lot of us getting ready for big fights. I look forward to getting to the gym every day,” Frampton revealed.

He feels splitting from his previous trainer Barry McGuigan and teaming up with Moore has given him a new lease of life.

“It genuinely has, and I’m not just saying that for the media. I feel like I’m in a better place and I feel much happier,” he told BoxNation pundit Steve Lillis.

“[It’s] probably the happiest I’ve ever felt as a boxer in my whole career. I’m talking about from the amateurs when I was sevenyears-old…when my ma was pushing me out the door to make sure I was going training. Right now I’m the happiest I’ve been in boxing!”

Frampton and his new trainer are currently training in Tenerife preparing for ‘The Jackal’s’ next fight against Bonito Donaire in April.

Frampton has said he feels a new lease of life under the guidance of Moore and the feeling is mutual. It was only last year that the Salford trainer confided in his friend and assistant coach Nigel Travis that he was ready to retire from coaching.

One of the main reasons for this was the lack of enthusiasm and commitment from the younger prospects he was training.

“Over the last three years I’ve trained some fighters and I’ve had to get rid of them, young prospects who should be the most enthusiastic and they are not,” said Moore.

“I expect fighters to be as committed as I was, at the very least. Why should I be dedicated to help them when they are not?”

Tommy Coyle may have been the reason Moore kept going with training but he won’t have to be concerned with a lack of enthusiasm with Frampton. Although he is not a young prospect – he openly admits he only has a few years left in him – he is determined to win a world title again before he is done.

That desire alone may well see him in a rematch with former foe Scott Quigg if the Bury man defeats WBO featherweight champion Oscar Valdez in California on Sunday morning.
If he is successful that will put him on Frampton’s radar for a rematch that Frampton  has always said he wouldn’t be interested in unless it was for a world title.

Speaking to the MEN he said “If he’s a world champion he’s got something that I want, that’s a world title.

“It’s strange how this game happens. I’ve been saying anytime Quigg’s name is brought up that I don’t want anything to do with him unless he wins a world title.

“If he wins a world title then we can do a rematch. Of course.”

Frampton walked away with a points victory when the two met in March 2016 for the WBA world and IBF titles at super-bantamweight before moving up to featherweight.

It seems that Jamie Moore will remain a boxing trainer for the next couple of years as he aims to take Carl Frampton back to the top – and make him a world champion again.

Read More »
September 26, 2020
PrevHave you read?In search of the perfect pie at the British Pie Awards
Next read...Do your mum proud with these last minute (but still awesome) Mother’s Day giftsNext