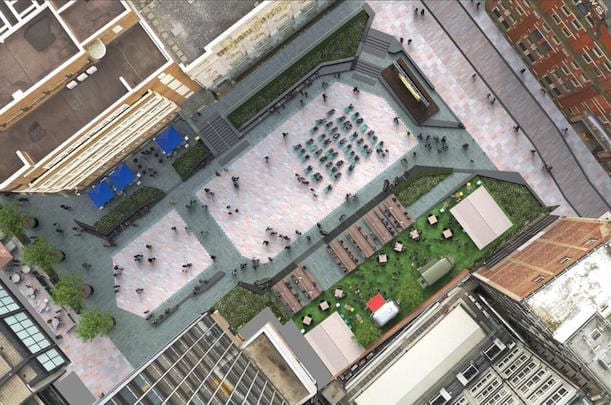 At the northern end of the city centre, the Co-operative has announced that the new public square in its 21 acres NOMA scheme will be called Sadler’s Yard. The name is inspired by James Sadler, who made the first manned balloon flight in Manchester in 1785.

A public competition which asked residents to submit suggestions for the name received 700 entries. I was privileged to be asked to chair the panel that chose the name from a shortlist of seven, and I can honestly say it was an incredibly tough choice.

We had received such a high number of entries, all of which had their merits but – following a long and interesting debate – Sadler’s Yard was the preferred option. James Sadler was an innovator, entrepreneur and daredevil, and we are sure his spirit will be encapsulated in the Yard.

David Pringle, Director of NOMA at The Co-operative Group, said: “We are proud of the new name and believe that the people of Manchester will take it to their hearts. We are looking forward to the first event in Sadler’s Yard, which is the official launch event in October.

“We plan to bring a series of enjoyable and interesting events to Sadler’s Yard from the end of the year and throughout 2016 and beyond.”

Sadler’s Yard will open in October and will become another new event space for the city centre. The square is being created between the CIS Tower, New Century House and Hanover Street opposite Victoria station. The area is expected to attract a mix of cafés, restaurants, bars and shops during the course of the £800m NOMA development.

The new city square is being delivered by NOMA and Manchester City Council and is supported by the European Regional Development Fund. It has been designed by Landscape Architects Planit-IE, and contractors Casey are on-site undertaking construction works.