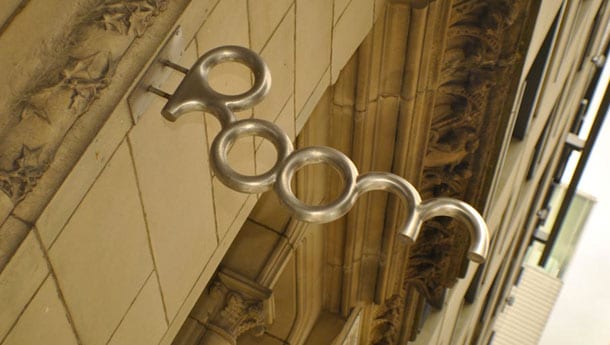 Room is aptly named, it’s a lovely room, a fantastic space steeped in history and making the most of gorgeous gems such as a fabulous fireplace, so big you could move into it and a balcony where Winnie (the statesman not the bear) addressed the good folk of Manchester.

In fact I love King’s Street for its beautiful buildings and now thanks largely to restaurants it’s great to see them back in use after the exodus to Spinningfields – although bad news about Entrecote.

Ginger, The Gay and I went to check out the new menu, actually on the first day of its launch. It seems that everything edible and quaffable has been given a complete overhaul – in fact almost too much to go into in one review and we’ll be back to check out the new cocktails, though we did make ample use of the new wines (delish). 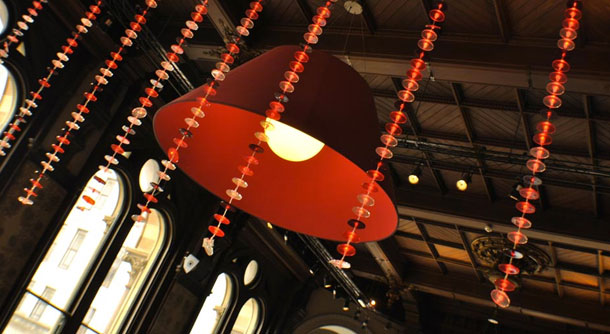 Chef James Wallis has been with the team here for just over a year – Room is one of the few truly independents established seven years ago – and he has been charged with the changing the menu.

We’re not talking a few dishes here but more a whole-scale slaughter, taking it from ‘British Classics with a twist’ to just getting the best bites from around the world, with more theatre at the table and more than a nod to fine dining. 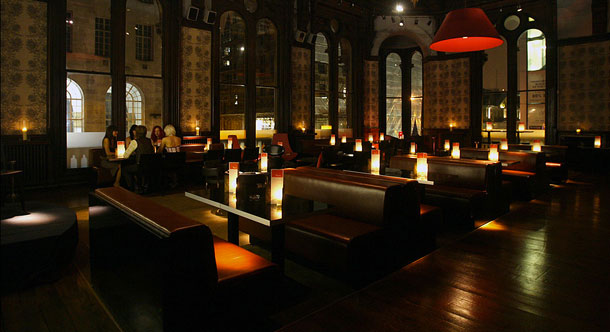 There are six new starters (starters from £5.95) and to do them justice we tucked into a platter of most of them.

We were seated at a beautiful oval table with views over King Street and were looked after by the fabulous Emma who was passionate, knowledgeable and fun, in fact the service here is excellent in a non-stuffy, efficient way. 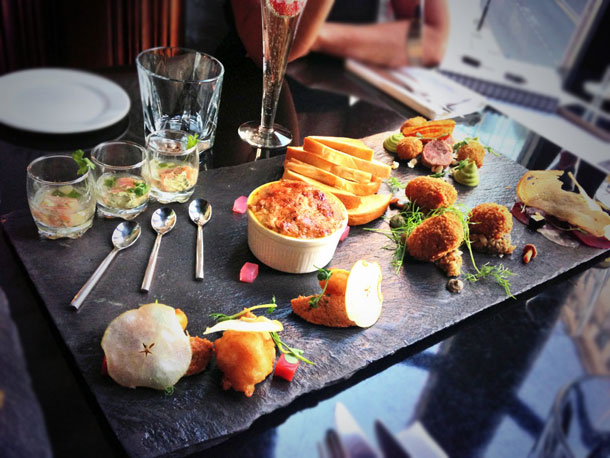 Back to the starters and the hero for me was a five meat terrine topped with foie gras that was so light, it had a mousse texture (they brulee it to get that texture) that danced on the tongue. The Gay felt the other meats weren’t as good and would have liked this just to be the foie gras (so much so he managed to nick most of it while I was people watching).

Other highlights including a cracking mushroom crocket served with a mushroom ketchup that was veggie and just as delicious as the other non-meaty appetiser of whipped goats cheese, with the Gay loving the chive tang and refreshing beetroot.

Ham and eggs were beautiful poached quail eggs, like a very very upmarket scotch egg, with ham hock and pea puree that altogether created a forkful of flavours.

I wasn’t too keen on the smoked salmon which came, for us to taste, in a shot glass steeped in a consommé bloody Mary and the deconstructed prawn cocktail, with the prawn in light batter sitting on a mayo mousse wasn’t my bag. I like my prawn cocktails, well like prawn cocktails really.

In fact if there is one criticism about the new food, it’s perhaps that there is too much going on and some of the dishes could do with being simpler. But as it was the first day of serving, this is the kind of fine tuning a good chef will do and there is no doubt that James is an excellent chef. 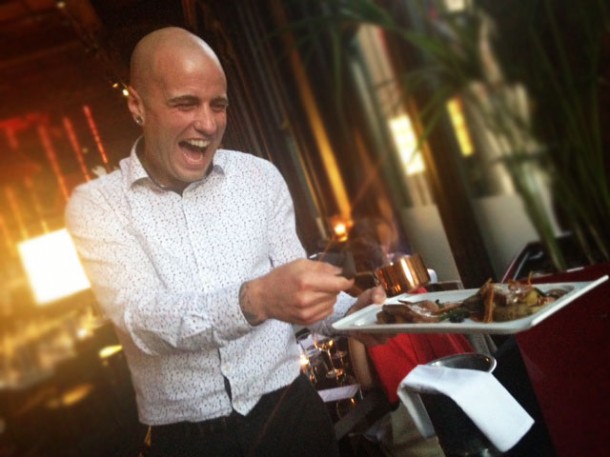 Onto mains (from £14.95) and the Gay and I were really excited to see Duck a l’Orange on the menu –where has this dish been hiding? Banished to the hinterland of unfashionable ‘has-beens’.

It was beautiful and like saying hello to an old friend with James somehow managing to infuse the whole duck with orange in a way that didn’t overpower.

But my absolute ‘rave about’ dish was the North African spiced lamb. I often say in reviews that you must go to an eatery if only to try one dish. And for me this was that dish.

It comes in a huge terracotta pot that you could put your head in easily. It was like a journey, delving into the bucket with each forkful as you bury down unearthing a treasure of a different flavour that added a different note to the dish, creating perfect harmony. I can’t rave about it enough. 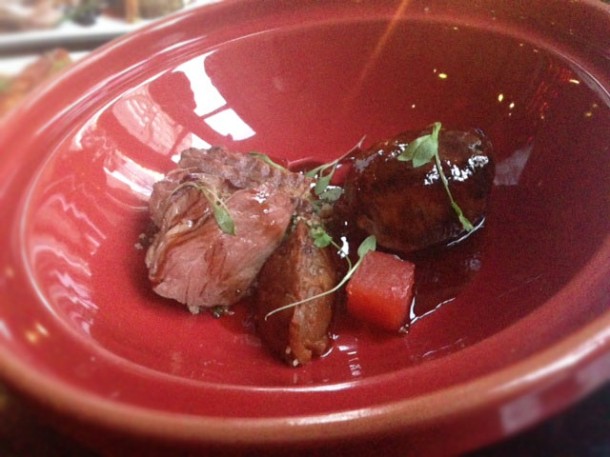 A pork platter, which felt like a nod to the plethora of new ‘posh burgers’ and ‘pulled pork’ dishes sweeping the city, was a little out of kilter with rest of the dishes. It came with corn on the cob on mini pink plastic pig skewers which the Ginge wanted to nick. He asked Emma if he could, was told he couldn’t and thus ended his career as a thief. 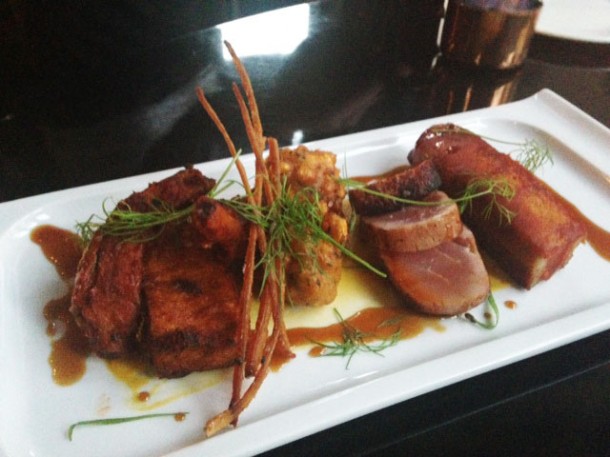 Back to ribs and all that jazz, they were competently cooked and the boys loved the fact they got sprays to douse it with BBQ infused butter (the Gay wanted to spray everything in it and tried to put one in his man-bag ‘for later’).

Our veggie dish was haloumi which had been morphed to mimic cod and chips. Apparently they get rid of the haloumi’s hardness by bathing it in butter milk until it becomes pliable. 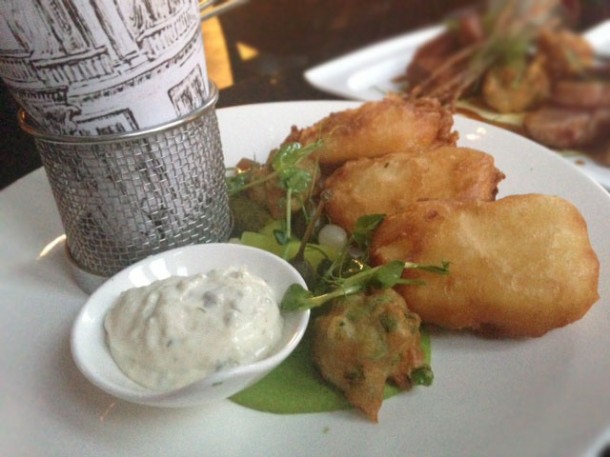 This dish (which was on the old menu as well) messes with your head. It looks and tastes like fish and chips in the best batter around but it’s cheese. If you didn’t know, you wouldn’t know, if you know what I mean. A complete triumph for our vegetarian readers.

We literally couldn’t stomach any more food so haven’t done desserts for you but will be back at some point to put those to the test.

This debut of the new menu was a huge success with great cooking and flavours and no sign of first-night nerves from James. I will be going back in a few months to see how it has settled in and you should try it too.

Then it was back onto King Street for early nights for all, but that’s another story.

The new Room menu was like a blushing bride on her wedding day with a whole future before her. We’re in love.