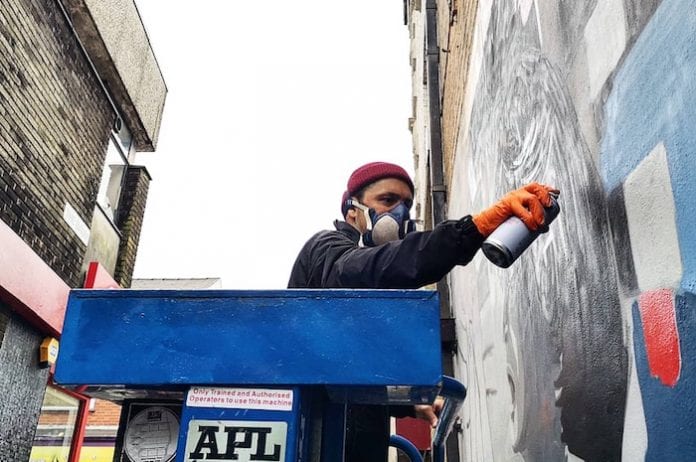 Residents of Rochdale will have no doubt noticed the arrival of some stunning new pieces of street art over the past few weeks.

They are part of a new street art festival which took place over the August bank holiday weekend for which a series of artworks were commissioned by street art duo Nomad Clan and Rochdale Council to bring new life to walls around the town.

For some, the idea of a council getting behind a large-scale graffiti project might seem pretty out there. After all, it doesn’t seem too long ago that such street art endeavours were considered a scourge on public and private property and even acts of vandalism.

But it turns out the project has been incredibly well-received in Rochdale and has even led to some property owners not originally included in the plans asking for their walls to be painted too, according to local councillor Janet Emsley.

“This is muralism. It’s street art that has meaning and depth, skillfully produced with a story to tell.

“Many of the artists have their roots in graffiti; this is evident in their styles. Some of the artists started with stencils and now they paint freestyle. The murals have been well received, you can’t fail to be impressed by them, they are magnificent.”

Nomad Clan artists Hayley Garner and Joy Gilleard originally approached the council with an idea for nine adverts to celebrate Rochdale as the birthplace of the modern co-operative movement. But it quickly snowballed to become a mural festival.

Each piece relates to Rochdale’s rich history, with many artists choosing to draw inspiration from its past as a textile hub for the cotton industry.

Others have chosen to focus instead on messages of environmental sustainability, gender equality, as well as looking at the town’s wider history as a whole.

Read on to discover the stories behind each piece below.

Manchester-based artist Folie’s mural on the side of the Volta Lab studios pays homage to the studio’s strong associations with the 70s and 80s Manchester music scene and its role in the 2002 film 24 Hour Party People.

The studio recorded Joy Division, Happy Mondays, Elbow and the Stone Roses, and Folie pays homage to this with a reinterpretation of 1979’s famous Unknown Pleasures artwork.

The finished piece also references Rochdale’s former Ashfield Valley Flats which had strong ties to the punk scene and were demolished in 1992 and women’s underrepresentation in music. 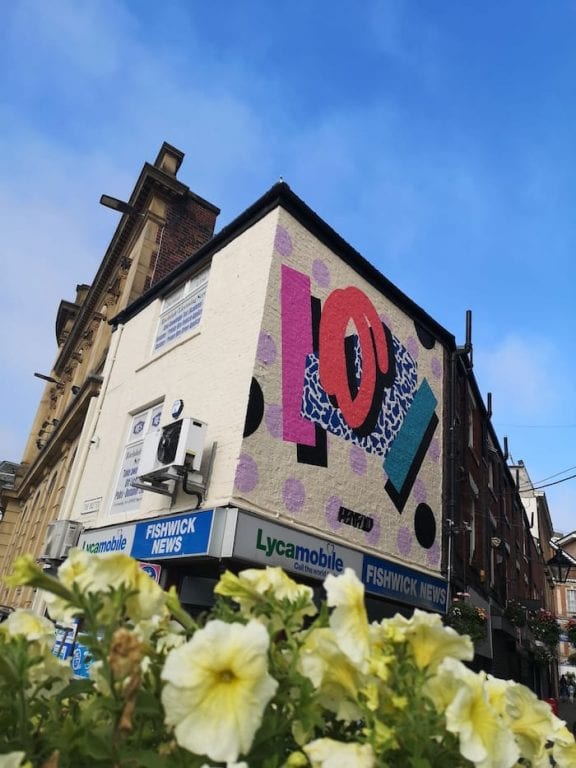 Using bright colours, shapes and patterns, Penfold’s piece is inspired by the town hall, which it practically overlooks from its position on The Walk. He’s depicted the historic building’s columns and patterned ceiling in his own style, which draws influence from pop art.

It’s been nicknamed ‘LoL’ by locals, who thought that’s what it said.

Towering out from the side of the shopping complex in Rochdale, Tank Petrol’s work celebrates the role of women in the cotton industry.

Based on a photograph from the 1950s, it shows a woman ironing and mending the cloth, – which would have likely just come off the loom. Women typically had reduced roles and were paid less than men, even when doing the same job. 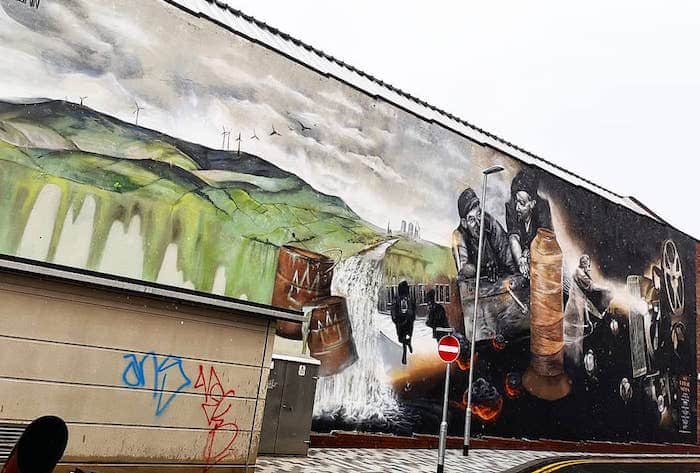 This piece by festival organisers Nomad Clan can be found on the side of what is now the Regal Moon pub.

Their projection idea was inspired by the fact the building was once a cinema, and the design, which features symbolic elements like the wind turbines and cotton trading, aims to portray Rochdale through the ages.

First opened in 1938, the cinema started out as the Regal before becoming the ABC and the Cannon. The mural they’ve created shows an old projector playing the story of Rochdale’s industrial growth on the wall. 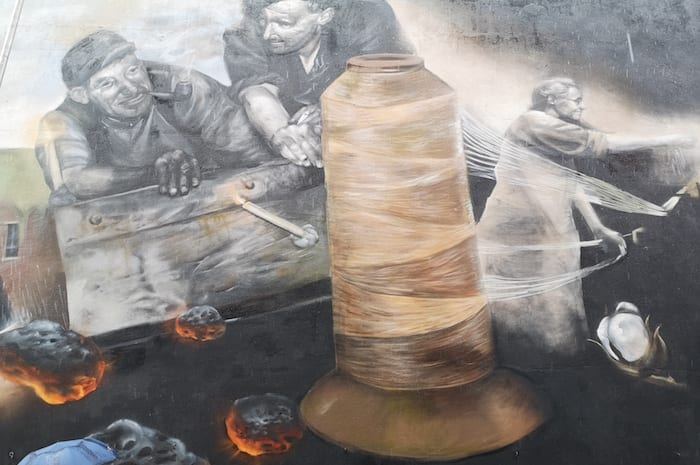 A woman winds yarn onto a giant bobbin, two miners work against the backdrop of burning coal and, then, tips into the present day with a remembrance of the Seven Sisters development and the hopes of better housing for all that came with it.

Last but not least, there are the Knowl Hill wind turbines which make up the second-largest onshore wind farm in England. A clear expression of industrial progress through the ages for all to see and reflect on.

Curtis Hylton’s giant rooster on the back of M&S follows the appearance of a huge duck in Blackburn last year. Known for his giant murals incorporating the natural world, Curtis’s work is on the rise as his animal and plant-inspired pieces become ever more popular.

Its floral background references to one of Rochdale’s first muralists, Walter Kershaw, who still lives in Rochdale to this day. His original Pansies piece was painted in 1972 and was quite famous in the town. Now long gone, it was also his first ever large scale mural.

Manchester’s street art fans may remember Tasha Whittle’s bright daisies from her Tib Street substation piece for Out House a few years back.

Appearing here on the side of the Rochdale Pioneers Museum, a conservation area famed for being the birthplace of the first modern co-operative society in 1844, her bright mural celebrates the beauty of nature.

It also ties into the area’s history, as daisies were also used as good luck charms by cotton weavers, who would carve them onto their hand looms in the Victorian era.

Known for their iconic LADS characters and precision marking, the London Police’s work has graced streets and galleries in 35 countries. They first started in 1998 in Amsterdam and within a few years had painted over a thousand characters on its streets.

Now their characters are on display in Rochdale too. The street on which they’ve painted was once a thriving hub of shops and businesses. Now in the process of being regenerated, this new mural brings new happiness, light and love to the walkway.

Underneath, artist This One has added a crayfish to draw attention to the fact that their numbers are dwindling in the Rochdale Canal.

Created in partnership with local youth group RECLAIM, which works with working class young people, this mural is full of positivity. Bright, colourful and bold lines are at play here, with inspirations for the mural coming from the lives of the young people themselves. The finished result is an abstract map that takes the shape of a road, referencing the streets of Rochdale along the way.

Part of the Never Ready crew, artist Philth is known for incorporating patterns and inspirations from the natural world into his pieces.

This mural pays homage to the town’s cotton weaving past and features eight cotton bolls – seven are open, in a nod to the past, whilst one remains unopened, as the artist looks to the future.

Philth also draws inspiration from inscriptions found at nearby historic buildings. One such inscription, Semper Paratus on the top of St Edmund’s Church, translates as ‘always ready’. It’s a stone’s throw from Never Ready, the graffiti crew Philth has been a part of for the past 14 years.

Manchester-based Lei Mai is known for her bright modern lettering and illustrations. Here, she clearly writes the name of the alley in which her painting appears – one of a number which still follow the medieval street plan of old Rochdale.

It’s adorned with patterns and flowers inspired by the work of William Morris, who designed several stained glass windows in the Rochdale Parish Church of St Chad’s and whose style inspired the refurbishment of the town hall in the early 1900’s.

Tea One (The Baum/Yorkshire Street)

Influenced by the north’s post-industrial landscape, TeaOne draws from the area’s past,  weaving together seven different stories from seven women.

It’s called The Seven Sisters, in reference to the Rochdale tower blocks currently due for demolition. Each has her own story, from the masked woman struggling with her own identity to the pregnant woman about to bring new life into the world.

The final woman, undergoing treatment for breast cancer, is deeply personal to the artist. Representing the ability to fight back from battles that turn our life upside down, he calls this “overcoming the monster”.