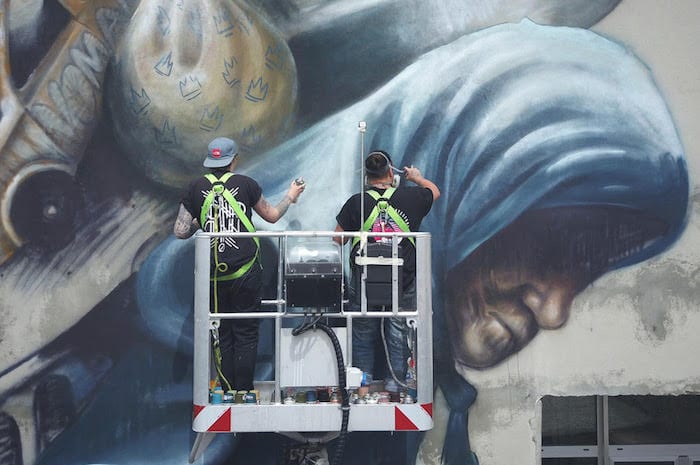 A host of world-renowned street artists will land in Greater Manchester later this month to adorn the drab buildings of Rochdale in their own distinctive styles.

They’re coming as part of a new five-day street art festival called Rochdale Uprising, which looks to breathe new life back into some of the North Manchester town’s unloved and neglected buildings through a series of 12 large-scale urban murals.

Street art pieces will be popping up in and around the town centre between 22nd and 26th August, transforming Rochdale’s streets into an open gallery that organisers hope will, in turn, inspire a new generation of artists to come.

There will be other activities going on too, with an exhibition, art fair, workshops, artists talks and much more due to take place over the five days. And even better, it will all be free.

It’s the first time such an event has taken place in the town and looks to showcase a mix of local and internationally renowned talent as well as the diverse creative networks that exist both in and around Manchester.

The event is the brainchild of Cbloxx and AYLO – aka Joy Gilleard and Hayley Garner, aka Nomad Clan – partners in life and love who have spent the past five years travelling and painting together, having created their first-ever joint mural on the side of the Molly House in Manchester’s gay village back in 2014.

In recent years the pair have taken their talent from Mexico and Germany to America, France and across the UK, and now will return to Hayley’s hometown of Rochdale at the end of the month to host the town’s first-ever street art festival.

“One of the core motives for running a mural festival in Rochdale is to inspire and engage the young people through direct visible action,” says Hayley Garner of Nomad Clan.

“As someone who grew up here, I remember an absence of art, culture, and a lack of artists to aspire to. One of the many strengths of urban contemporary art is how readily available and accessible it is, turning the streets into a gallery that only inspires imagination as opposed to the traditional elitist galleries that some people would never access.”

Things will kick off on Friday 23rd with an opening party gallery show at the Urban Artistic Gallery, with drinks sponsored by Yorkshire brewers Northern Monk.

On Saturday 24th, Pete Obsolete’s pop-up doodle event OverDrawn will take over the Baum in Rochdale from 7pm to 10.30pm. Expect for every surface to be covered in plain white paper, just waiting to be drawn on.

And Sunday will see a series of artist talks featuring scene leaders including Urban Nation director Yasha Young, graffiti veteran Kelzo and London Police take place at the Rochdale Market and Food Hall between 2pm and 4pm. Here, festival-goers will have the chance to quiz artists directly and glean valuable insights from seasoned professional artists.

Taking place over August bank holiday weekend from 22nd to 26th August, we look forward to seeing some beautiful artwork inspired by the area’s rich heritage.