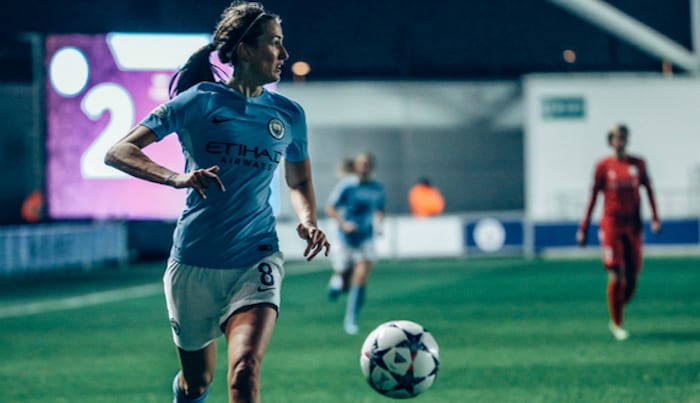 As if the rivalry between Manchester United and Manchester City isn’t fierce enough, it’s about to start on another level –  providing the Reds’ application to join the FA Women’s Super League gets the green light at the end of May.

United are one of 15 clubs bidding for nine vacancies in one of the fastest growing branches of the sport in the UK.

United have been under pressure for not fielding an adult professional women’s team – not least because Manchester City Women have been one of the most successful since joining in 2014.

With a roster of England international players, they were WSL1 runners up to Chelsea Ladies in 2015, champions in 2016 and second – again to Chelsea – last year.

They currently stand second, a point behind Chelsea, in the league, and have reached the quarter finals of the FA Women’s Cup and the semi-finals of the UEFA Women’s Champions’ League. They play at the Academy Stadium, part of the  Etihad complex at SportCity.

If their bid – submitted a week ago – is successful, we will have to wait a while for a Manchester derby. United would expect to play in the second tier during the 2018—19 season – unlike City who, controversially, went straight into WSL1 at the expense of Doncaster Belles. Their home base would be The Cliff training ground in Salford.

United executive vice-chairman Ed Woodward has insisted that the women’s side “must be built in the same image and with the same principles as the men’s first team”.

Until now, United had resisted calls to reinstate the women’s team that they scrapped in 2005, despite Manchester City, Chelsea, Arsenal and Liverpool all having thriving teams in the WSL system.

They have, however, operated a women’s section for junior age groups, where they have worked with local schools and community groups through the Manchester United Foundation.

It is anticipated trials for the new team will be held in June.

Woodward added: “The FA has provided excellent support and we believe that launching a team would give many more of our graduates from the Regional Talent Club the chance to establish themselves as first team players.”

Due to next season’s restructure, existing tier-one and tier-two clubs had to re-apply for their 2018-19 licences earlier this term.

Sides wishing to play in the top league will have to meet new professional criteria, including running a youth academy, while the Women’s Championship will be a part-time division.

There will be a maximum of 14 teams in the WSL next season, but the final number may be fewer than that. In the Women’s Championship, there will be up to 12 teams, seven of whom are already confirmed as staying put from the current membership. According to BBC Sport the Women’s Championship has been heavily oversubscribed, with interest from several lower-team clubs.

The applications will be assessed by an expert panel and the FA’s Women’s Board.