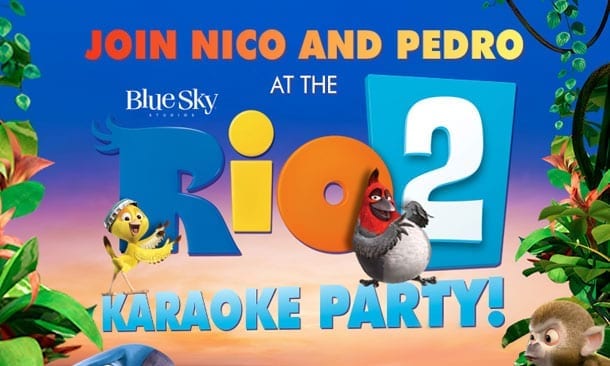 To celebrate the eagerly anticipated cinema release of Rio 2, our feathered friends Nico and Pedro are landing in Manchester to host their very own Rio 2 Karaoke Party.

One of only six stops on their national UK Karaoke Tour Nico and Pedro will be live on stage at the Intu Trafford Centre on Sunday 23rd March, performing their favourite chart hits with the young Rio fans of Manchester.

Be sure to join Nico and Pedro live on stage from 12:00noon on Sunday 23rd March for the Karaoke Party, Rio 2 goodie giveaways and a day of feathered family fun and games. Get your dancing shoes on and join the party!

It’s a jungle out there for Blu, Jewel and their three kids in RIO 2, after they venture from that magical city into the wilds of the Amazon for a family reunion. Out of his element in a land he doesn’t know, Blu must face his most fearsome adversary – his father in law – while evading Nigel’s fiendish plans for revenge. All your favourite RIO characters are back, and they’re joined by Oscar® nominee Andy Garcia, Grammy® winner Bruno Mars, Tony® winner Kristin Chenoweth and Oscar/Emmy®/Tony winner Rita Moreno. RIO 2 also features new Brazilian artists and original music by Janelle Monae and Wondaland.

For more on RIO 2 please visit: www.riomovie.co.uk
Keep up to date with the latest news: www.facebook.com/RioMovies

RIO 2 WILL BE PREVIEWING WEEKEND BEFORE RELEASE ON 29TH AND 30TH MARCH, RELEASING IN CINEMAS NATIONWIDE 4TH APRIL.