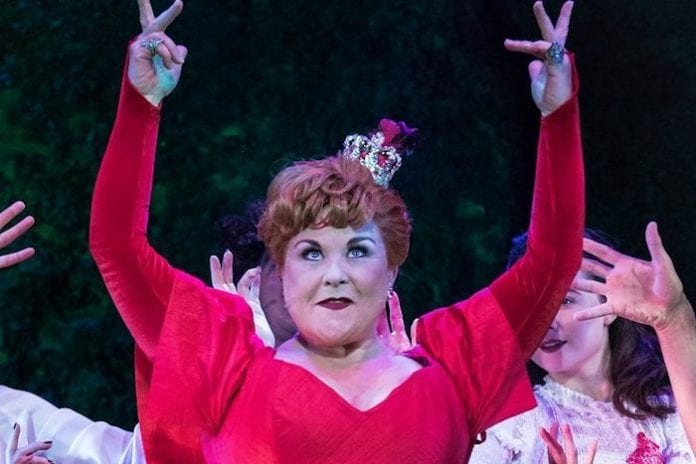 Very different to any other version of the Lewis Carroll classic, this exquisite musical is a contemporary blend of Alice’s Adventures in Wonderland and Through the Looking Glass.

After workshops and productions in Tampa, Florida and Texas, Wonderland premiered on Broadway in 2011 and the UK adaptation is now touring.

This story is unlike any Wonderland tale I’ve ever come across. In this version, Alice is forty years old, divorced and finding it impossible to move on from her manipulative ex.

Instead of falling down a rabbit hole, it’s a broken lift that takes the characters into the beautiful and strange realm of Wonderland – which is where those who no longer want to be a part of the real world escape to.

And there’s even a chance that the Queen of Hearts (portrayed fabulously by Wendi Peters) will chop off your head. Off with your head, however, is not a death sentence in this Wonderland. It’s simply a way to ensure you never leave that world. If only I wasn’t so squeamish.

Alice ends up falling into Wonderland alongside her sensible daughter Ellie (Naomi Morris) and the adorable Jack (Stephen Webb) from downstairs who is hopelessly in love with her.

Things take a hilarious turn as the three main characters step through the looking glass and change into a side of them they’ve never been – the mirror image of themselves. Ellie changes from sensible and grown up to a stroppy teenager with very funny mannerisms and the most realistic exasperated tone of voice ever. Jack becomes cool and slick, with the voice of a rockstar and the dress sense of Kenickie from Grease.

But darkness seeps in from the looking glass when Ellie convinces the Mad Hatter (a female version in this production) to step through and she switches from harmlessly bonkers to cold and tyrannical.

The sets and props used in this musical are absolutely amazing. From Alice’s flat and the lift in the flat block, to the magic of Wonderland and the intricate, huge gilded looking glass, everything was visually stunning.

The caterpillar played by Kayi Ushe, was one of my favourite things about the show. Extremely cool with an amazing voice, he had some truly hilarious lines, and the smoothest, coolest song in the whole production. A small ensemble of girls portrayed his extra legs and this was very well done and kind of mesmerising. I loved it.

Wendi Peters is incredible as the Queen of Hearts. Her physicalities, over exaggerated sashay, regal and clipped voice and extreme love for jam tarts were all flawless. I couldn’t have imagined a better fit for the role.

The songs and the singing in this production is of a ridiculously high quality, with the incredibly talented Kerry Ellis as Alice and the amazing Natalie McQueen as the Mad Hatter.

In fact the song they sung together This is Who I Am was probably my favourite piece of music in it. Sung both beautifully and powerfully, it was extremely captivating and very catchy.

They even had songs from the original production which had been taken out when it was performed on Broadway, which will make die-hard fans extremely happy.

But don’t compare the story too much to the Broadway one if you’re familiar with that version. Although the basic premise is the same, some of the lyrics and aspects of the storyline have been changed and adapted for a UK audience. But fear not, for this works well and the production is truly splendid.

This is a fantastic show with brilliant actors, extremely good songs and was just a really amazing evening. If you’re a fan of musicals or Alice In Wonderland – or both – this really is the perfect piece of theatre for you.