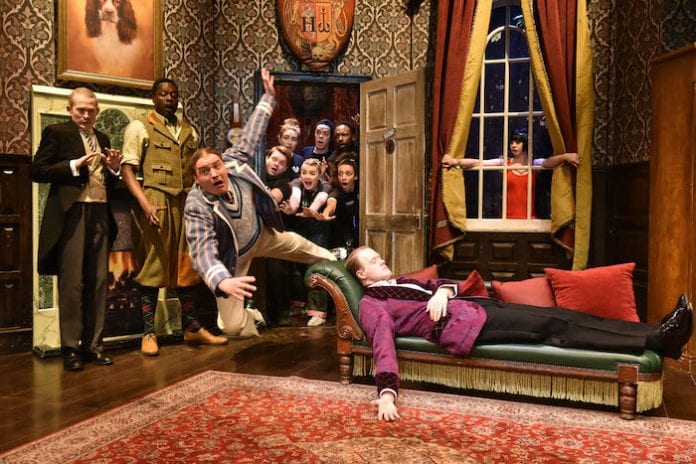 The Play That Goes Wrong has kept audiences in the West End laughing for the last four years, and you can see why. It has all the elements of a classic farce and reminds of you of Michael Frayn’s classic comedy Noises Off meets Victoria Wood’s Acorn Antiques.

During the first ten minutes, the fourth wall is close to collapsing, as the backstage staff behind the dram production, Murder At Haversham Manor, try their best to make do and mend, as the props start to break and fall to pieces.

Involving one member of the audience, who must hold on to falling pictures and shelves, the scene is set for this frenetically funny farce, by the aptly named, Mischief Theatre.

This is a production which tests the patience of those who do not like silly pranks and pratfalls. If you recall John Cleese hitting a car with a tree branch in Fawlty Towers and it makes you cringe, or Michael Crawford going downhill on roller skates in Some Mothers Do ‘Ave ‘Em leaves you cold, then The Play That Goes Wrong is not for you. 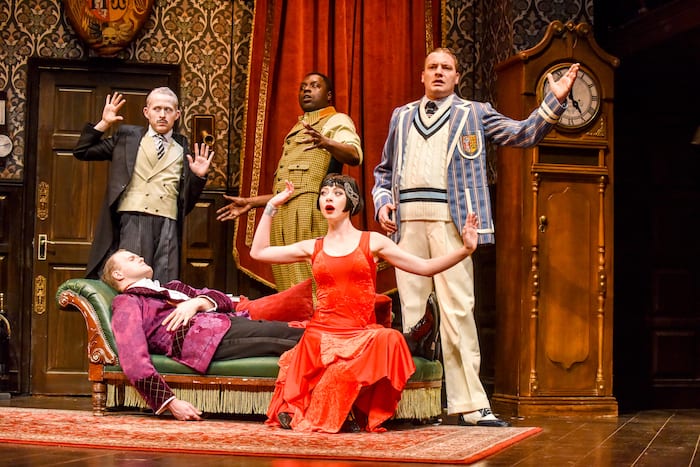 Because, as the set collapses, and the cast cling on for dear life, their voices get shriller and the whole plot is stretched like an elastic band. And sure, sometimes the long pauses and overdone comedy does long for some of the subtlety of Noises Off, as we never find out about the actors themselves, as they are in character throughout.

The main selling point of this sometimes brilliantly funny piece is the fact that the accomplished cast must play characters who are trying hard not to lose it. So in the main the comedy comes from their restraint. And like a boiling kettle with no off button, it is completely out of control.

The gifted actors work like Olympians for the two hours plus running time, with Jake Curran’s Chris holding things together as his character finds himself addressing the audience when this play goes wrong.

Bobby Hirston’s Max has a static smile, which gets wider the more the play gets out of control, and this is completely infectious. David Kristopher-Brown is incredible as he balances items in his hand, as the set falls to pieces, and he finds himself hanging on by a thread. The result is something really thrilling for the audience.

It’s a shame then in the second half, all of this excellent work is almost undone by one really dated and truly offensive joke. The Play That Goes Wrong is good old fashioned family entertainment, and there were many kids in the audience, loving the slapstick comedy.

But when you include a joke involving a male actor taking a woman’s role, and realising that he has to kiss the leading man, and he begins to cringe, some audience members will mirror this reaction.

And that is exactly what happened on the night I attended. A child went “urrrrggggghh”, which was met with several laughs from the audience. I say several, because there were huge pockets of silence, and rightfully so.

If this was 1972 and it was an episode of Dick Emery, then it would be in synch with society at the time. But, now? It makes most of the audience feel uncomfortable because if two men kissing is still seen as the butt of a joke, where are we headed? The line “Manchester does not want to see this” was partially correct, but it’s more that Manchester does not find this funny. It’s just lazy and should be cut from the show.

Mark Bell’s production is suitable for all ages. It’s clever, fast paced, expertly delivered by an energetic cast, and it never lets up for a minute.

Henry Lewis, Jonathan Slayer and Henry Shields have written a comedy which is timeless, as audiences love watching mistakes and fluffed lines. If only they got rid of that gag, this would be as close to comedy perfection as you could get.

The Play That Goes Wrong is at The Opera House until 30th June.