When there’s something strange in your neighbourhood, who you gonna call? This isn’t quite Ghostbusters, but there are plenty of references to ghostly tales in this new stage thriller from the pen of Peter James.

The setting is Sussex where a family are moving into their new country house. Five minutes in, they begin to hear strange noises, and before long the house starts to resemble the set of the old kids TV show The Ghosts of Motley Hall, with an unexpected guest who is determined to stay put.

To scare audiences who are sat down to watch something live on stage, you need good sound design and lighting. And often less is more. Susan Hill’s The Woman In Black remains effective because, as with the best horror films like Hitchcock’s Psycho, you don’t see much and your imagination runs wild.

The recent stage adaptation of William Peter Blatty’s The Exorcist throws everything at the audience, including humour, in the hope that something will make you jump.

The House on Cold Hill sits somewhere between Scooby Doo and Tales of The Unexpected, as we follow Ollie (Joe McFadden) and Caro (Rita Simons) and their teenage daughter Jade (Persephone Swales-Dawson) as they walk around their new abode trying to find out who or what is intent on sharing their space and frightening them.

Where the play works is by using an Alexa voice assistant as something to fear. Once this box starts commenting on what is going on and delivering threats, you are reminded how reliant we have become on technology and how much of what we do is being listened to.

Alexa starts to sound like Hal the computer from 2001, frustrated and exasperated in her delivery. It makes us feel we don’t really need our lights turned off by a device – we can just get up and do it ourselves.

There are some good ghostly visual effects involving a mirror. The problem is that they are used repeatedly. Unexpected darkness – for example the horror trope that is the power cut – would be more effective.

The plot meanders and relies on characters telling us about the history of the house and the tone flits around like a moth to a light.

Is it a comedy, a thriller or a ghost story? There are a few jumpy moments but not nearly enough to sustain the running time.

Joe McFadden and Rita Simons are very game and convince you that they are running scared. They also have great comic timing and Shaun McKenna’s adaptation of the novel includes references to things such as Strictly which please the audience (McFadden is a former dance champ).

If you fancy a couple of hours of pure hokum featuring some well-known TV actors and a few jumpy moments, this will do the trick.

But for genuine horror fans Netflix hit The Haunting of Hill House is a much better bet with more scares per minute.

Peter James’ The House on Cold Hill is at the Opera House until 18th May. 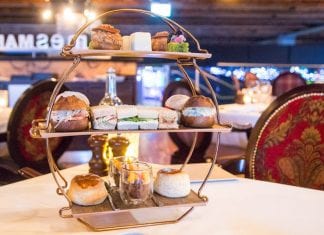