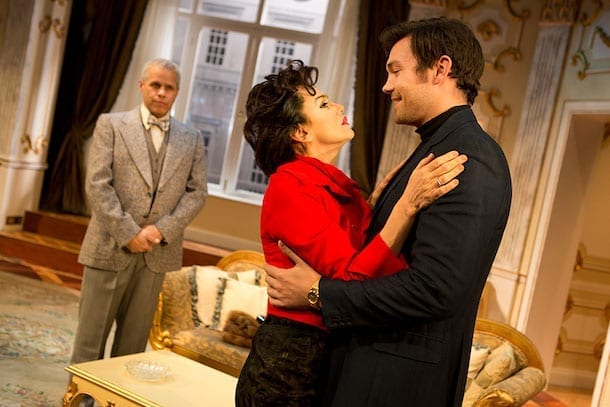 For those who know the herstory of Judy Garland, the plot of End of the Rainbow will be familiar. The play follows Garland (Lisa Maxwell) through a performance run at London’s Talk of the Town in the late 1960s, exploring her relationship with her pianist Anthony Chapman (Gary Wilmot) and her manager/fiancé Mickey Deans (Sam Attwater).

Garland’s hair is
a mess and her
makeup is worthy
of a low-rent
drag queen.

Long gone are the days of the fresh-faced actress whose performance as Dorothy in The Wizard of Oz earned her an Academy Juvenile Award. The main set is a sumptuous hotel room of gold and cream with marble columns, but you know from the get-go that things aren’t all rosy for her any more. Garland’s hair is a mess and her makeup is worthy of a low-rent drag queen. “Of course, half of them are stuffed with towels. You have to keep up appearances,” says Garland of her many suitcases, flippantly, upon arrival.

Lisa Maxwell expertly navigates the many emotions of Garland that are showcased in this work with an unfaltering energy throughout. She remains firmly and comfortably in character for the duration, which makes Sam Attwater’s less confident American accent stand out. Her performance is so compelling that in the brief parts of the show when she is not on stage, the magic seems to fade a little. The spell broken for just a moment or two, although perhaps that’s the point. She’s the diva. She’s the star.

This portrait of one of the most famous actresses in the world covers many facets of her personality. We have glib Garland: “I’ll skip this lyric. They’ll be applauding.” We have despondent Garland: “I didn’t need help, I needed pills.” And we have desperate Garland: “I’ll try harder, just don’t give up on me,” she pleads with Deans at the end of the first act.

The characterisation is even carried over into her costumes. Who knew that there was such a thing as a lacklustre sequin jacket? But the tired look of some of Garland’s outfits reflect the tiredness she is feeling. Even a microphone cord appears to be like a chain she has to drag around the stage each time she performs. There is plenty of humour in the show, even descending into some slapstick comedy at times, but ultimately this is a dark story about a woman having serious issues with drugs and alcohol. The humour simply throws these struggles into even sharper focus.

It seems a little cruel to say that the songs are not a highlight of the show, but my main complaint on the music front is that you really only get snatches of each number. This is a play with a few songs thrown in, with a verse of The Trolley Song here and a chorus from Somewhere Over the Rainbow there, and Maxwell’s performances are true to Garland’s later style. She’s got Garland nailed, so I wanted more! It’s just a shame that there isn’t a whole song anywhere in the show.

An excellent evening’s entertainment and I would highly recommended it. Unless you don’t like the f-bomb being thrown around. In which case I’d give it a miss. 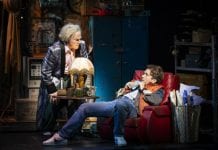 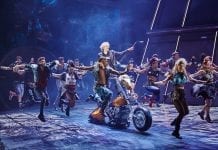 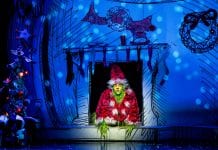