It's difficult to resist the dark side... 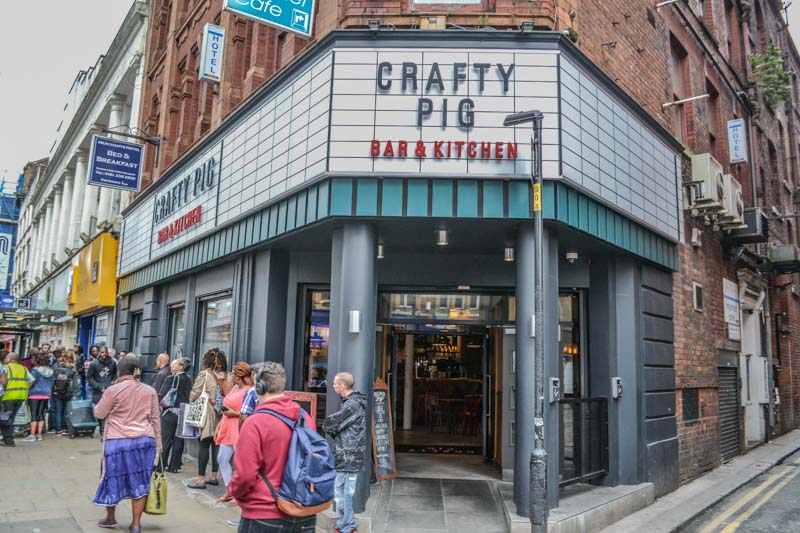 Once upon a time in a place called Monton there was a Blind Pig. It became so popular its owners decided that they would like another pig. So when a place called Joe’s Bar in Manchester closed, they turned it into The Crafty Pig.

“we were drawn
to the dark side
and, despite our
best efforts, were
unable to resist
the temptation.”

Contrary to our expectations, there’s not much of a pig theme going on. There is, however, a film theme, from the cinema-style pinboard signage outside to the menus and some of the dishes. Perhaps they should have called it Pig in the City. But more of the film stuff later.

The interior is NQish, quirky and eclectic. Lots of exposed brick and wood, reclaimed materials and furniture and a mix of tables and booths. It’s quiet when we arrive around 3.30 on Friday afternoon but by the time we leave around 6 it’s busy with a nice mix of people of all ages having drinks, some just out of work, some getting ready for a night out.

The new menu is split into a light side and a dark side. Saints (‘the side of the menu you can’t feel guilty for’) and Sinners (‘the naughty side you can’t ignore’).

The dark side doesn’t have a parental advisory sticker but it does say “Hamburgers, the cornerstone of any nutritious breakfast.” This is all you need to know. It’s where the burgers, dogs, wings, and ribs are.

On the Saints side are healthier options and classic dishes. It’s not quite kale, mung beans and tofu but there are salads, vegetarian curry, ratatouille and roast chicken. This little piggy doesn’t have roast beef but it does have fish and chips, pies and roast chicken.

Needless to say, we were drawn to the dark side and, despite our best efforts, were unable to resist the temptation.

For some reason the burgers are Tarantino-themed (Pulp Fiction to be precise). There’s the Vincent Vega, the Great Vengeance and Furious Anger, Mrs Wallace, and Quentin’s Suitcase). We went for the Royale with Cheese (£9.50) (two patties with bacon, cheese, crafty sauce, slaw and gherkins) and The Shoulder Shot (£11) (pulled pork, BBQ sauce, crafty sauce, purple slaw) and sides of Parmesan Fries and Dirty Fries (£1 each). We also had a bowl of Cheesy Nachos (£5) and a hot dog.

We’re not fans of cheap hot dogs. Too many preservatives, flavourings and colours and not enough meat for our liking. But the dogs here aren’t cheap, so we tried one – the Naked Dawg (£8.50).

The Royale With Cheese (‘it’s what they call a quarter pounder in France’) was full of flavour, though one of the patties was rather overcooked. We prefer them pink in the middle. The tender pulled pork in the Shoulder Shot was just right as were the fries, especially when dipped in some Bloody Mary ketchup (which contains real vodka). The burgers are served on a paper napkin on a tray. Better than a board but, like most people, we prefer plates.

The Naked Dawg was a real smoked meat sausage which melted in the mouth and bore as much resemblance to a cheap hot dog as a pedigree does to a mutt. The Nachos were pretty special with enough topping to go right to the bottom of the heap.

The portions were generous. So generous that we struggled to finish our meal before and finally admitted defeat. Not something that happens very often.

Too many places go for style over substance. The Crafty Pig gets it just about right.