Review: The Cherry Orchard at The Royal Exchange Theatre 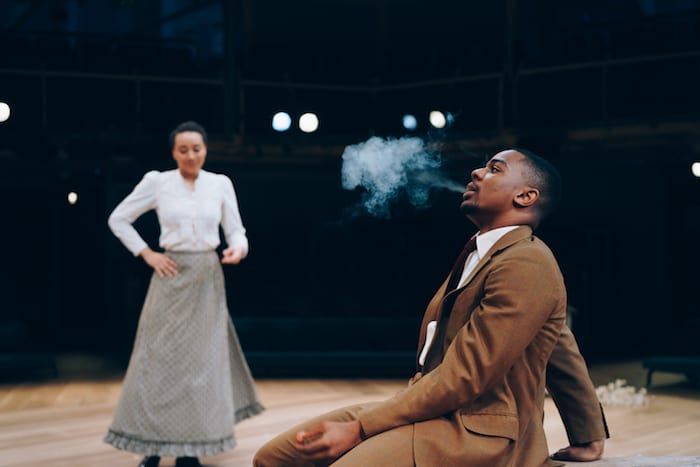 The Royal Exchange used to be the go-to theatre for the classics. Many seasons have featured productions of plays by Shakespeare, Shaw and Chekhov. Over the last few years, the space has seen far more diverse work performed.

This new production of Chekhov’s classic The Cherry Orchard meets you in the middle and features beautiful symbolism, non-traditional casting, and a breaking of the fourth wall. This means the play does not feel dusty or old fashioned.

This is Chekhov’s final play and, as you would expect, it has light comedy, high drama and melancholy. We witness a tide of change about to hit a middle-class family. Some of the characters are aware that the money is not rolling in, but they all have one thing in common. They are in denial.

Madam Ranyevskaya (played by the luminous Kirsty Bushell) is a character who keeps referring to her happiness and delight at what the day will bring, but she turns on a sixpence because deep down she can see the cracks and fissures. She is not as content as she would like people to believe.

Bushell plays this complex character beautifully with style and grace, but also with an inner sadness.

I have seen this play performed when some of the subtlety has been lost. Here Bushell takes her time to reveal every facet of the Madam’s personality. Your patience is rewarded as you see her unravelling – and it’s heart-breaking.

Lopakhin (a confident Jude Owusu) strides onto the stage with a desire to rescue the protagonist, but this will come at a cost to the family. The symbolism of the Cherry Orchard blossoming, offering the characters shade and a place to reflect is striking here, especially as it is conveyed through dialogue as opposed to visuals.

Colin Grenfell’s lighting is so striking that it really does feel as if the grand space of the Exchange is letting the sunshine in.

Tom Piper’s set design is minimal and consists mainly of props. This means the audience must work harder, as gone are the lavish designs, to highlight the family’s wealth.

But, as the stage is stripped bare, this works wonderfully well, as you see how little they have left, both emotionally and economically.

At times, the play’s tone is erratic, as we watch party tricks, a variety of accents and acting styles, so there is the odd moment where it seems as if people are acting in different productions. But this starts to calm down as the emotional context of the play comes to the fore.

Rory Mullarkey’s new translation conveys the beauty of the original text and highlights the swift change in mood as the family become aware that things are not going to get better. Michael Boyd’s production is startling when it comes to the representation of grief and this  hits you like a punch in the gut.

Chekhov is not for everyone. The play is far from action-packed. Some may find themselves nodding in agreement when the protagonist says, “I keep expecting something to happen.”

But this is a play of tiny moments which add up to something much bigger. It leaves you pondering about how quickly our lives can change and we don’t even notice.

The Cherry Orchard is at the Royal Exchange Theatre until 19 May.