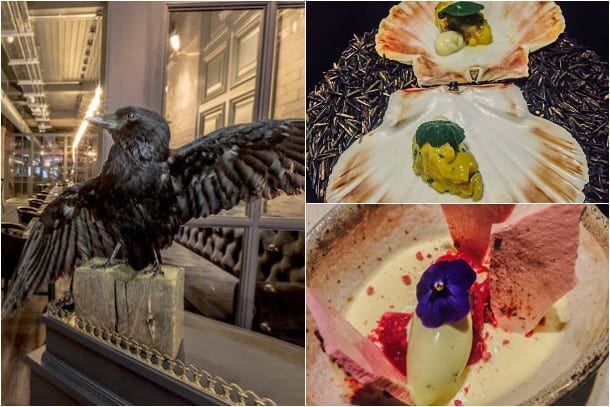 As much as I love the experience of fine dining and its chance to masquerade as an urbane bon viveur, the food can sometimes be a bit fur-coat-no-knickers for me, says Mark Jorgensen.

Quill is Manchester’s latest high profile fine dining restaurant. First thing to say is that I think the location is an admirable gamble. South King Street, while undoubtedly at the navy corner of a Manchester Monopoly board, is populated by retail outlets which are closed in the evenings, making it a night-time thoroughfare with massive potential rather than an established destination.

On arrival, we walked through the little covered patio to be greeted by a crow. Just a crow. There was a guy serving cocktails at the bar, so front of house was just a taxidermist crow on a plinth.

We crept up the stairs directly in to a packed dinner service in full sweep. A nice chap came over and said he was preparing our table so have a drink downstairs. “Nice one Mark, you’re such a grunt you’ve even got walking in to a fancy restaurant wrong” I quietly hissed at myself. Thankfully, pretty much every one else who arrived the rest of the night did exactly the same.

I do have previous with fine dining blunders. In a swanky London restaurant I once confidently asked a waitress to describe the dish I was inquisitively smelling, “That’s tap water with a lemon in. You wash your fingers in there, sir.”

“Nice front of house crow,” I dad-gagged to the chap as he lead us up to our table.

“Ha, it’s actually a raven. There’s a lot of them around,” he chuckled.

Partly humiliated by my ornithological clanger, and partly wondering whether the promise of more ravens was vaguely sinister, we took to our table.

The menu for the evening: Curtis Stewart’s Signature Menu.

After spotting a couple of fishy inclusions, I was worried about dropping the bombshell that I don’t eat fish so made the admirable decision to lie that I was allergic.

The waitress excused herself, popped to the kitchen, and came back to give me two options instead of the trout. The first was a blue cheese something, the other a no-brainer choice of pigeon pastrami.

We had already been served the starter by the time I told them, so we agreed on me having both scotch eggs rather than the mullet. I’m not a massive black pudding fan but it worked really well. 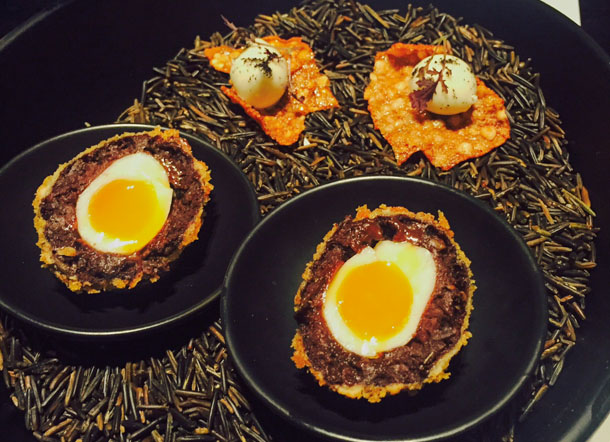 The chicken liver parfait was served in two scalped eggs nestled on a bed of hay inside a branded wooden box, which both looked and tasted great. I was so perplexed at how they had cut the tops off the eggs without cracking them I had to ask the waitress. Razor wire.

The pigeon pastrami looked like a little ornate sculpture. It’s hard to imagine what pigeon pastrami tastes like, but whatever you’re thinking, it’s probably that. Lighter than you’d think for being as gamey as you’d expect.

Next was a dish comprised nearly entirely of differently prepared beetroot. It looked incredible and despite a general dislike of beetroot, each mouthful was remarkably different-tasting, in a good way. 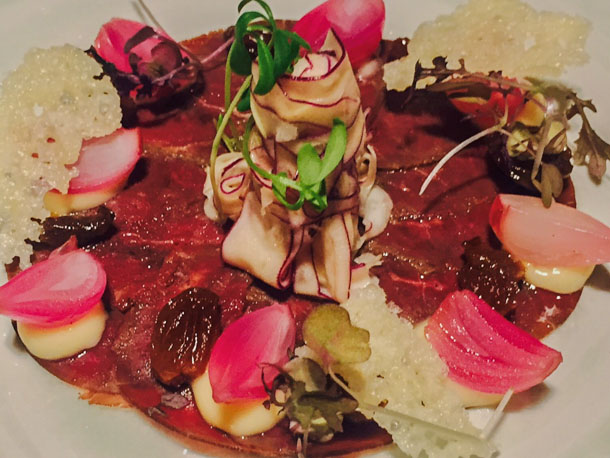 Shortly before the lamb main course, we had started to notice a distinct smell of bonfires. The tables being served before us each had a smoking pot on their table as they were served. Debating what it might be, we were advised that it was rosemary and hay, gently smouldering to infuse your senses to compliment the lamb.

I’d take the piss out of that if it hadn’t strangely worked. The lamb was delicious, two different cuts of Cheshire lamb with pearl barley swimming in a rich sauce. I usually just eat lamb for the mint sauce so I was relieved to enjoy it as much as I did.

Next was a surprise pre-dessert dessert not on the menu. This was my least favourite course. A thyme ice cream atop a raspberry and vanilla (I think) panna cotta. The idea of a thyme flavoured ice cream didn’t scan for me, and I found it a little odd and overpowering. 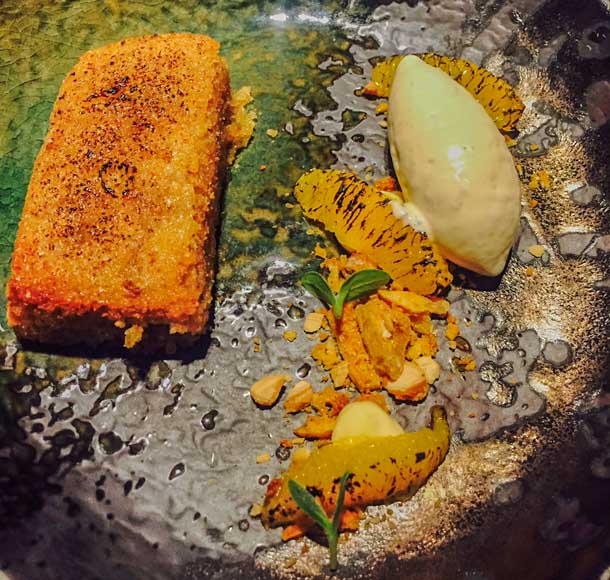 Dessert main course was a treacle tart which looked a bit like a slab of brown sugar. It was heavy but offset perfectly with a really good almond ice cream.

Part of the fun of Quill is the anticipation of just how each course might arrive. The timings of the row we were on meant each table was served the same course in a sequential ripple about five minutes apart. With us being three along, it was fun sneaking a glimpse of the impressively unexpected presentation of each.

At £50 per head, it’s far from cheap, but I came away feeling that it was worth it for a night experiencing something a little different to anything else in the city. The service is great once you are seated but they really do need to have someone to flank the welcome raven.

It’s worth noting that we had a January offer, meaning we got more courses for less. Looking at their site, it’s three courses for £50 so, as enjoyable as it was, my perception of the value might well change. I’d have to peek under that particular fur coat, or something less creepy sounding.