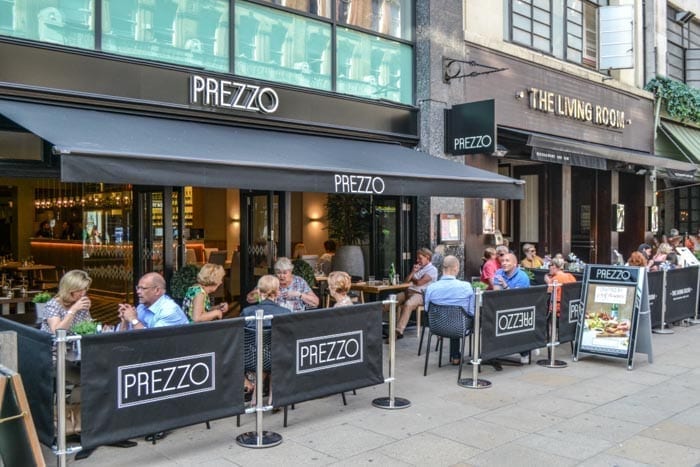 What better way to spend a hot Wednesday afternoon than traffic watching on Deansgate? So we’re off to Prezzo, which recently opened where Cafe Rouge used to be. There’s one in The Printworks, too, but we’ve never been, so this is our first taste of what Prezzo has to offer.

We are big fans of Italian food, but Prezzo is a chain so it’s possible that the ice cream might not be the only thing on the menu that’s been frozen. We’re not expecting a gourmet meal, just something tasty which doesn’t cost an arm and a leg while we watch the cars and the X43 Manchester to Nelson via Rawtenstall and Burnley go by.

‘We’re not expecting
a gourmet meal, just
something tasty which
doesn’t cost an arm
and a leg’

Outdoor seating is often at a premium on this particular stretch of Deansgate when the weather is fine, but we get lucky and we’re off.

As you might expect, the menu is full of Italian staples-pasta, pizza, risotto, grills. By way of a taster we share Crab Cakes with Garlic Mayo (£5.95) which are nice enough then on to mains.

My companion chose a pasta combi (‘for those who just can’t decide, have two smaller portions of your favourite classic pasta dishes’) for £14.45.Spaghetti with Chicken and N’Duja Sausage with red onion, olives, peppers, cherry tomatoes, crushed chillies and parsley in a pomodoro sauce, finished with buffalo mozzarella, and Penne with Wild Mushrooms (a selection of shiitake, chestnut, oyster and button mushrooms, red onion, asparagus, peas, spinach, leeks, truffle oil, parsley and bella lodi cheese in a cream sauce).

My companion has a bigger appetite than most men and some wild animals so the fact that he didn’t finish his food was telling. His verdict was bland and tough, taking al dente too far.

When it comes to Italian food, I’m a fan of the classics so I chose one of my all time favourite dishes- Spaghetti with Meatballs (£10.25). It was tasty enough and the portion was generous. The pasta was as it should be but the meatballs were hard and it was light on tomato sauce.

For dessert my companion chose Salted Caramel Arctic Slice (£5.95) because, in his words, “salted caramel sauce makes everything tastes good.” This seemed to be going down a treat until he spotted a rogue hair which was enough to put him off the rest.

For dessert, I chose two scoops of ice cream (£3.95), or one scoop of Strawberries and Cream gelato and one scoop of Black Cherry Sorbet to be more precise. This was definitely the highlight of my meal. There’s only one word to describe it-fantastico, as cheeky Italian TV chef Gino de Campo would say. Probably the best gelato In Manchester and amongst the best I’ve tasted this side of Milan.

The bill came to £40 for one starter, two main courses, two desserts and a bottle of water. Not the most expensive Italian food in Manchester, but not the cheapest either. And definitely not the best. But then again, we didn’t expect it to be.