With competition from other Spanish restaurants just a stone’s throw away – namely Iberica, Lunya and, more recently, the fantastic El Gato Negro, the onus is on new smaller-scale independent Tapeo to hit the ground running. Have they 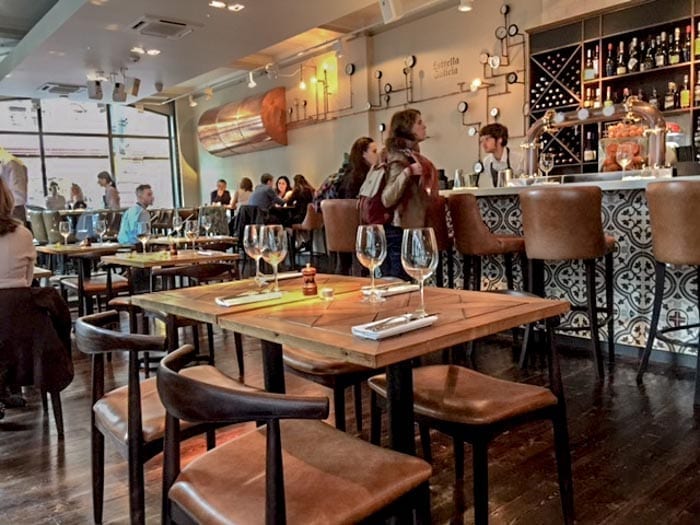 Tapeo is the latest in an influx of surge of Spanish restaurants located in and around Deansgate. It is an independent owned by a husband and wife team (possibly something to do with Man United number 8 Juan Mata, too) in a grade II listed building looking to bring the authentic taste of food and wine from sunny Valencia to, ahem, sunny Manchester.

The décor, the tiles, the open charcuterie, the music, the smells, you genuinely feel like you could have walked into a nice little place on a quaint Valencia high street. I was impressed with how authentically Spanish it feels. Top marks so far.

We were greeted by our waiter, accompanied by a new member of staff who was learning the ropes. He could do a lot worse than to learn from that guy, too.

He had clearly spent a lot of time in Spain learning his craft and while talking us through the menu, displayed a really enjoyable ability to blend his local accent with flawlessly pronounced Spanish dish, wine and region names. Trivial, perhaps, but with the rolling r’s and th’s blended with the voice of a Manchester radio presenter, he sounded ace.

As part of the starter with olives and bread, we were enthusiastically sold their home made crisps with sea salt and paprika (£1.50) and went for it. They were a bit odd. They are lovely crisps but they are just, well, crisps. With a bit of paprika on them. We actually quite enjoyed nibbling on them with the wine, but they later emerged as garnishes on a couple of the dishes and it just seemed a bit of an odd thing to focus on.

From the selection of small plates, the Ibérico Bellota Ham Croquettes (£7.60), Patatas Bravas (£5) and the Albondigas (£6.20) were all really nicely done. Surprisingly I think, a lot of places tend to get meatballs wrong, with tough, overdone globs of meat swimming in an otherwise tasty sauce. But these were tender and delicious, breaking apart with little effort.

The only slight disappointment for me were the Braised Pork Ibérico Cheeks in a Rioja Wine Sauce (£6.40). It sounds daft criticising a pork dish for tasting of pork, but I found that’s all I could taste. The pork cheeks were nicely cooked but they tasted like pork-smothered pork in a pork sauce with pork sprinkles. It was a little overpowering. They also had some of the aforementioned crisps nestled on top as a bit of a bizarre garnish.

Then our single dabble into the large plates arrived. It was a Slow Roasted Segovian Style Spanish Milk Fed Lamb Shoulder and for a hefty £23.50 we had great expectations. Unfortunately, we were surprised to see a rather lonely looking – albeit massive – single lamb shoulder in a dish.

We were invited to shred it ourselves, a la duck and pancakes, but after the first scrape of the fork, I found myself searching around in vain for more meat. There was very little of it, and the meat that was there was nowhere near good enough to justify the price of the dish.

Billing themselves in their name as tapas and wine, there is a clear focus on the wine side of things and they certainly delivered on that. Our waiter recommended – and beautifully pronounced, I might add – his favourite rioja, and it was a really, really nice wine.

I’m by no means a sommelier, but we did order a second bottle. Just to check we liked it. We did.

Nevertheless, the wine, the service, the small plates, the location, the surroundings, there are enough positives there to suggest Tapeo has the potential to hold their own amongst their considerable competition.

They definitely do the best crisps.

Read More »
September 26, 2020
PrevHave you read?REVIEW | Gino D’Acampo My Restaurant – the good, the bad and the arancini
Next read...Manchester’s restaurants aren’t all meal deals and happy hours, Mr CorenNext