The new stylish Spanish kid on the block... 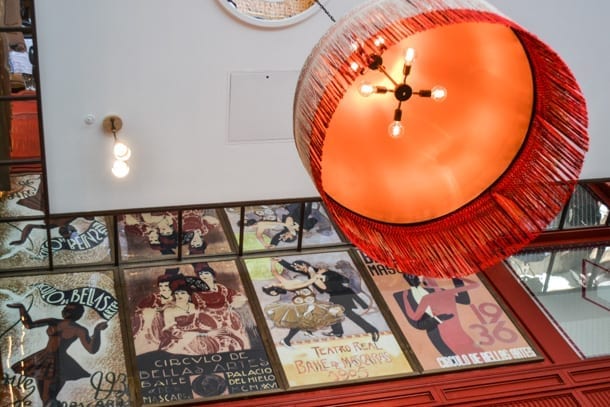 There’s been a huge interest in all things Spanish in recent years, driven no doubt by the popularity of Spanish football – no fewer than 12 Spanish-speaking players took part in last week’s derby. So there’s no excuse needed on a warm spring Manchester afternoon for a late lunch at Iberica, the new stylish Spanish kid on the block.

To say the arrival of Iberica to Manchester has been highly anticipated would be an understatement – and now the wait is finally over. The huge 200-seater restaurant in Spinningfields is the fifth instalment from this glitzy restaurant chain and the first to open outside London. It occupies the big corner unit which used to be All Saints.

The decor is impressive with floor to ceiling windows, making it very light and airy, and not a sewing machine in sight. Fitted with sumptuous and sophisticated interiors, it certainly gives the impressive venue an elegance which fits right into the Spinningfields dining scene. The white leather seating, a pottery display and large wooden cabinets add opulence to the surroundings, with nods to traditional Spanish heritage. Shawl chandeliers, matador jacket lanterns and tapestry-inlaid chairs are wonderful additions to a quite mesmerising restaurant space. 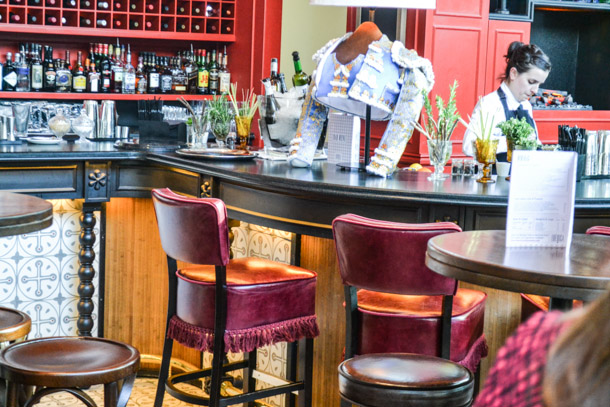 The Asturian-influenced menu created has a collection of tapas, combining traditional classics with innovative cuisine and explained in-depth by the helpful and friendly waiting staff.

As well as offering traditional, well-known national dishes such as croquettes and paella, the menu also has a lot more experimental offerings such as Gazpacho with red berries, beetroot and anchovy (£4) and Hake with clams and lemon parmentier (£16 as a main dish).

Due to its location in a busy business district, Iberica also offers an express lunch for £10 (a small plate and stew) and a set lunch menu with three small dishes for £15-our chosen option. 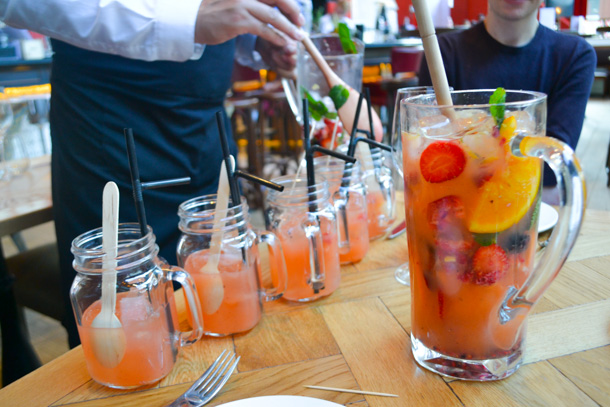 Before this, however, we sampled the cava sangria, with an anglicised revamp. More resembling Pimms, laced with fresh strawberries, raspberries, orange and mint. A refreshing alternative, especially on a rare sun-drenched afternoon.

Now, to the food. First to fly out of the kitchen were fried chorizo lollipops with pear alioli. This certainly was one of the quirkier dishes. A savoury lollipop with the chorizo speared on in a smoked paprika tempura-esque batter was a wonderful amalgamation of texture and flavour. Partnered with a weird sounding pear alioli, it certainly added sweetness to the dish, with a large garlic kick. Thankfully, perhaps, the flavour of pear was lost in such a heavy-hitting dish. 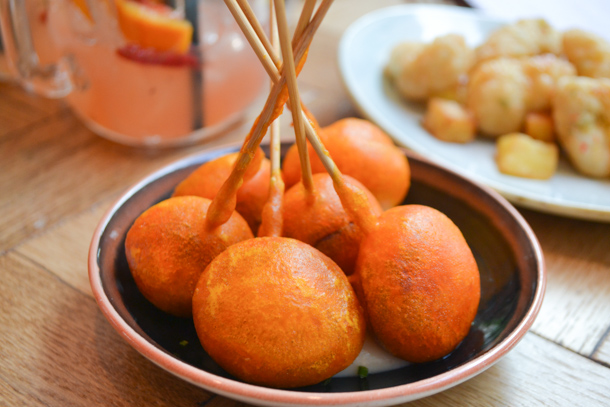 Fish & chips certainly wasn’t what we expected to see on the menu and it couldn’t have been further away from the traditional. Although the batter was well flavoured with garlic and fresh herbs, it wasn’t crisp and texturally wasn’t quite right. The potato cubes or “chips” were seasoned well, but again, weren’t crisp. Lacking.

A salad of Valdeon cheese, spinach, apple and sunflower seeds also arrived- the concept sounded wonderful, but proved to be rather disappointing. The subtle flavours of the sweet apple and iron of spinach were overshadowed and dominated by the incredibly strong Valdeon cheese. Unbalanced. Definitely the least popular dish in our group.

Chickpea puree with chorizo, pancetta and tomato salad was next. I was extremely wary of this dish as, with chickpeas, there is a danger of them being too stodgy and bland. But these were well flavoured and light. Dotted with cubes of salty, smoky, rich chorizo and pancetta, this dish proved to be one of the highlights. The tomato concasse and garnishing micro herbs made it pretty as a picture and added a freshness to cut through the richness of this whole dish. A winner. 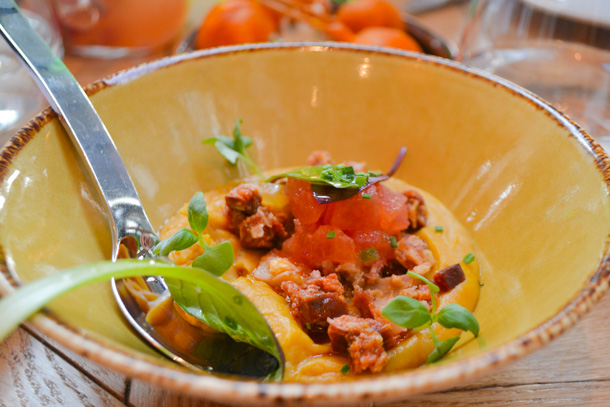 Next was the Chicken with chilindron sauce and rosemary potatoes. The chicken, perfectly cooked, moist, crispy skinned, well seasoned- perfect in itself. With the tomato-based chillindron sauce heavy in chilli and smoked paprika, it acted as a perfect partner. A crowd favourite.

Next. Sea trout with almond puree, pickled cauliflower and smoked olive oil. The sea trout cooked sous vide certainly improved the fish texturally, but it seemed to suck all the flavour out of the main element of this dish. The expected sweet/sour combo of almond puree and cauliflower pickle didn’t quite elevate the dish and lacked acidity. Certainly the most ordinary dish we tried. 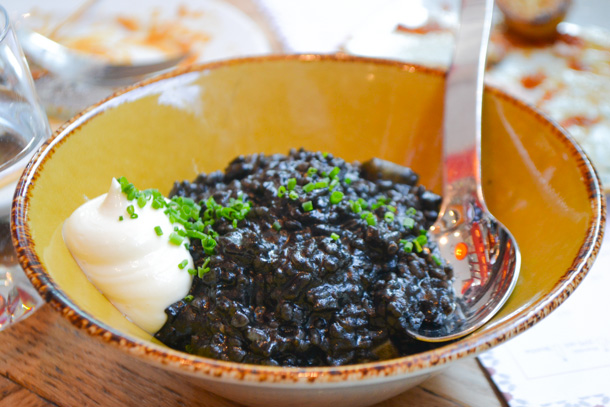 The last dish to come out was the highly anticipated Creamy black rice with squid, prawns and alioli sauce. It was well worth waiting for. The black rice coated with squid ink and white of the aliloli certainly looked a fashionable dish, but it wasn’t style over substance. The black rice had flavours of the sea and almost made you imagine that you were sitting on a sun-soaked terrace by the Spanish coast. Slow-cooked prawns and squid added an extra of luxury to an already rich, opulent dish. Another winner.

The verdict? Not quite perfection, but certainly very close. Is it good enough to persuade Mr de Gea to stay in Manchester a little longer? Let’s hope so.