Classic plays such as Hobson’s Choice can benefit from new adaptations.

If they do not stray too far from the meaning of the original text and respect is paid to the writer’s work, the end result means that something timeless and relevant can remain.

Harold Brighouse’s 1916 comedy about a Salford bootmaker and his three daughters features strong women who stand up for what they believe in – particularly Maggie, the eldest daughter, who is dismissed by her overbearing father as a spinster at 30 years of age.

In this production, Tanika Gupta moves the play to Ancoats in the 1980’s and the setting is the rag trade.

Tailor Hari Hobson (Tony Jayawardena) spends his life telling his daughters how they should live their lives and there is no escape from his domineering ways because they work for him.

His eldest daughter Durga (Shalini Peiris) is a brilliant saleswoman, excellent at balancing the books, and is the brains behind the shop. Meanwhile, her father spends much of his time in the local pub, but never pays her the respect or the money that she deserves.

When she decides to make her own luck and find a suitor and a shop nearby, the sparks begin to fly.

This production could be really clumsy because this is such a classic. It has been performed countless times and the David Lean film version is beloved and features a great turn by Charles Laughton.

But Tankia Gupta’s beautifully drawn adaptation is playful, makes pertinent points about gender, family and race, and veers from some very funny scenes to heartbreak with such precision that it feels as if you are spending time with people you know.

Tony Jayawardena is perfect as Hari Hobson, the man of the house is stoical in public, but in private, depressed and dependent on alcohol to take away the pain. He cannot express how he truly feels, so anger and insults fire out of him. One scene in which he admits that he is suffering in silence is heartbreaking.

Shalini Peiris brings something fresh and appealing to the role of Durga (formerly Maggie). In other productions I have seen this character adopt masculine mannerisms and it has never felt right.

Here she stands up for herself and sure, she is manipulative but she also cares deeply about her sisters and her father. She longs to live her own life and have her own identity but comes across as someone who is not just an angry woman. She is more than that and deserves far more than the life she has been given.

Esh Alladi is a real scene stealer whose character transforms before your very eyes. He lives like a dormouse below stairs, working all hours as a tailor behind the scenes. Once he and Durga combine forces, he is reborn. Watching him stand up for himself means this gifted actor can convey this through some wonderfully funny physical comedy. It’s a joy to behold.

Maimuna Memon (who wowed Sheffield audiences recently in Standing at the Sky’s Edge) and Safiyya Ingar are both excellent as younger sisters Sunita and Ruby, who are propped up by Durga, the true matriarch of the family. Gurjeert Singh has fun as a photographer who is part of Durga’s plan to show her father who is the real boss.

Atri Banerjee’s production has plenty of laugh out loud moments and is filled with colour and vibrancy, thanks in part to Rosa Maggiora’s beautiful set design, which captures the workmanship that that used to be evident on the high street in the tailor shop, but also because of the beautifully drawn performances which engage you on so many levels.

The second half runs out of momentum at times, as there are so many scenes of manipulation that you may start to side with Hobson, however rude or unreasonable he may be.

But this is far more than an experimental play. It sets a benchmark for modern updates and adaptations of classic plays because it will appeal to fans of the original and newcomers alike and offers something we really need right now – warmth, compassion and belly laughs.

Hobson’s Choice is at The Royal Exchange until 6th July. 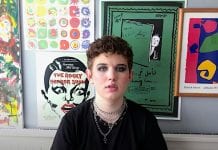