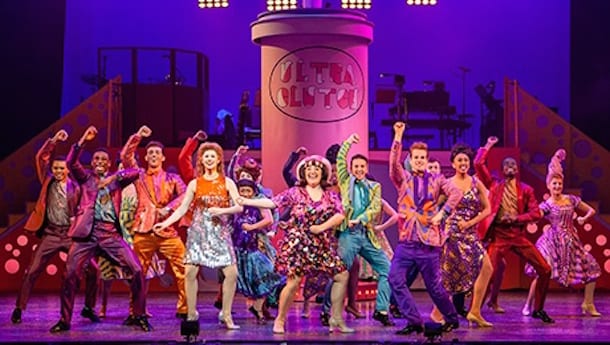 It’s Monday. Mondays are dead in Manchester so what to do to relieve the malaise brought on by the Derby bore draw? How do I get myself out of this malaise? I head for the Palace Theatre for an uplifting, toe tapping, hand clapping extravaganza that is the Broadway production smash hit, ‘Hairspray.’

With John Waters’ 2007 movie still relatively fresh in our minds, it was unsurprising that the theatre was packed for this production of Hairspray. And thankfully, they we were not disappointed.

In case you’re not familiar with the plot, it’s 1962 Baltimore. Our heroine Tracy Turnblad is a dumpy teenager full of big dance moves and a bigger heart. In frumpy blouse, ill-fitting, high-waisted skirt and beehive hairdo, she endears from her first entrance.

She dreams of making it on to her favourite Corny Collins Show, becoming Miss Teenage Hairspray and winning the heart of sweet but vain Elvis wannabe Link Larkin (Ashley Gilmour). Freya Sutton as Tracy captures her effervescent optimism and loveable character and oozes a sublime charm, wit and enthusiasm that melted the hearts of the Manchester audience.

The production radiates warmth but its real power is the way it tackles the issue of racial segregation. John Waters’ original film is based on a real incident on a real TV show, when black and white teenagers in Baltimore stormed a live broadcast to demonstrate its utter prejudice – a scene which is enacted on stage and in black-and-white on the 1960s-style TV monitors around which the starstruck teens huddle after school.

The cast is superb and the show captures all the novelty and excitement of early TV in the flashing smiles of the DJs on The Corny Collins Show and the giggly exuberance and optimism of the dancers.

All the prejudice is embodied in Velma Von Tussle, superbly played by Claire Sweeney and the vivacious Brenda Edwards of X Factor fame who takes the place by storm as Motormouth Maybelle, with a voice that can do anything and go anywhere she wants to go. Her rendition of ‘I Know Where I’ve Been’ was both powerful and spellbinding and worth the ticket price alone.

Tracy reluctantly finds herself on the front line campaigning against racial discrimination, taking reluctant mum Edna along for the ride. Tony Maudsley is a delight as Edna Turnblad, in sensible shoes and dresses that look as though she’s just run them up on her sewing machine.

With a gravelly voice that can roar, he doesn’t play it like a dame. He struck the balance between pantomime dame and musical theatre star perfectly by just playing it like a woman and all the better for it!.He was the nearest thing to Les Dawson I have seen since, well, Les Dawson.

His duet with Peter Duncan of Blue Peter fame was a comic highlight which raised a raucous laughter from both the actors and the audience alike.

Lauren Stroud particularly impressed as spoilt princess Amber von Tussle with her sharp dancing and spiteful asides although Monique Young almost stole the show as Tracy’s hapless friend Penny Singleton who finally broke the shackles of her strict mother, turning from a plain plaits and satchel teenager into a beautiful energised woman as her romance blossomed against all odds with her black suitor Seawood played by Dex Lee.

Marc Shaiman and Scott Wittman’s scores are awesomely big and bold, from ‘Good Morning Baltimore’ to the finale, ‘You Can’t Stop the Beat’ and while Paul Moore’s set was limited, it was highlighted by the windows of the three tall Baltimore houses which lit up the stage like a rainbow, and the bars of the House of Correction which extend for the whole width of the stage.

The talented cast and impeccable choreography all combined to create a high energy performance. The humour, romance and sheer fun of Hairspray make it impossible to resist whilst delivering a strong message on issues such as race and body image.

In all, this hugely talented young cast captured the vibrancy of Hairspray with vigour and vitality – it was clear they enjoyed performing this feel good show as much as the audience enjoyed watching it.

It only runs for five days. See it while you can.