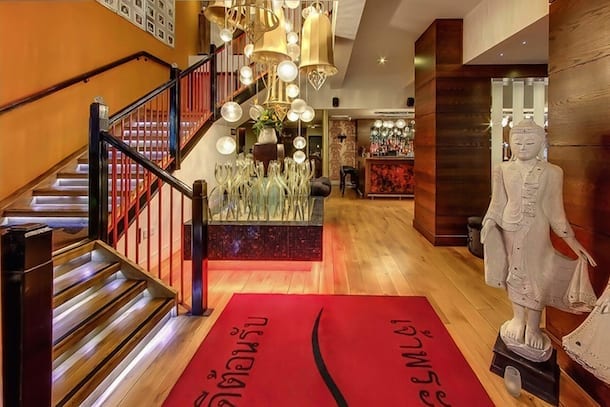 If there’s a foodie heaven on earth, it’s almost certainly somewhere in Thailand. It’s one of the world’s great cuisines and one of the most popular. Massaman curry, a popular Thai dish, came top in a list of foods deemed “worth travelling the world to gorge on” compiled by CNN, and Thai food came second to Italian food in a Rough Guide poll of the world’s favourite cuisines.

Thai food is often associated with street food – Bangkok is known as the street food capital of the world – but from the moment you walk in, it’s clear Chaophraya is fine dining, good enough for Sepp Blatter. It’s just like being in Thailand. Even the weather is positively Thai – it’s throwing it down outside, the way it probably does in the monsoon season in Thailand (we’re in the middle of the Manchester monsoon season, which lasts roughly from January to December).

To complete the authentic Thai experience, we sit on sumptuous cushioned floor seats at a sunken table (or booth to some). If you’re not used to this kind of seating, a word of warning – you don’t have to be a yoga expert but it helps, and it’s probably best avoided if you’re arthritic or if you’re wearing a short skirt. Fortunately, I am neither arthritic, nor am I wearing a short skirt as I’m a man. It’s fine once you’re in, but getting out is another matter, especially if you’ve eaten too much (which is easy because of the generous portions). Regular seating is also available and extends upstairs. 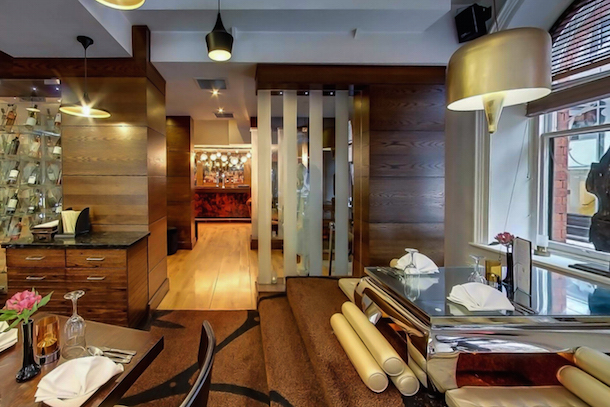 To drink, I chose Mai Mao (£4.50) a non-alcoholic cocktail of mango juice, lychee juice, mixed with raspberries strawberries and blackberries- a drink so delicious it’s enough to make a hardened drinker give up alcohol. My companion chose Made in Thailand (£7.95) – a cocktail consisting of Ketel One Citron vodka with a splash of Malibu, muddled with lime, lemongrass, and coriander shaken and served tall over ice topped off with ginger beer and a hint of pineapple juice. Fantastically refreshing, but in a more alcoholic way. 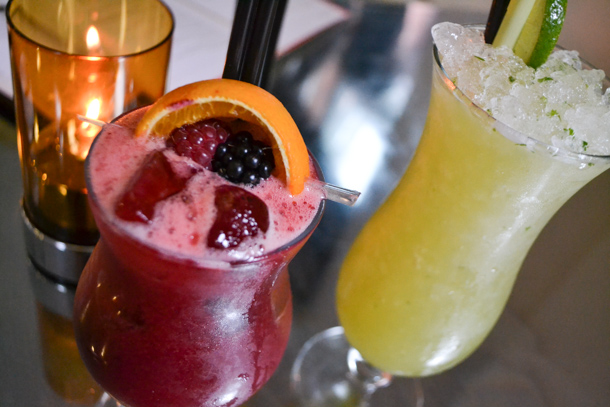 For starters, we chose Thai Fish Cakes (£7.55) – spicy cod and coley fish cakes blended with green beans, lime leaves and red curry paste served with a sweet chilli sauce and a peanut vegetable relish and Prawn Tom-Yum (£8.95), a creamy hot and sour soup with king prawns, mushrooms, lemongrass, galangal, roasted chilli and lime leaves flavoured with Thai herbs which my ginger companion said was full of big bold flavours and deliciously nourishing. He resisted the urge to tip the bowl to drink it but only after I managed to restrain him. 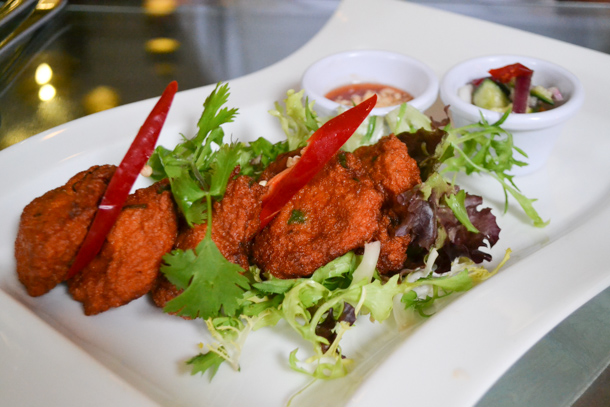 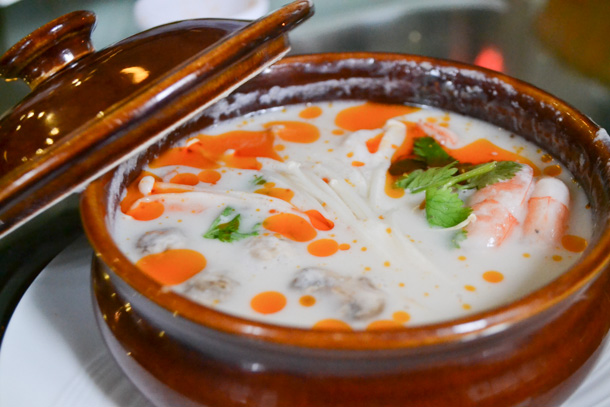 For mains we chose two classic Thai dishes. I chose Thai Green Chicken Curry (£10.55) – tender chicken breast simmered in coconut milk with courgettes and aubergine, garnished with sweet basil and chillies accompanied by Sen Jun Luak (£2.95), rice noodles with soy sauce, bean sprouts and fried garlic. The curry was creamy and neither too hot nor too spicy. The best Thai Green Curry I’ve ever tasted. 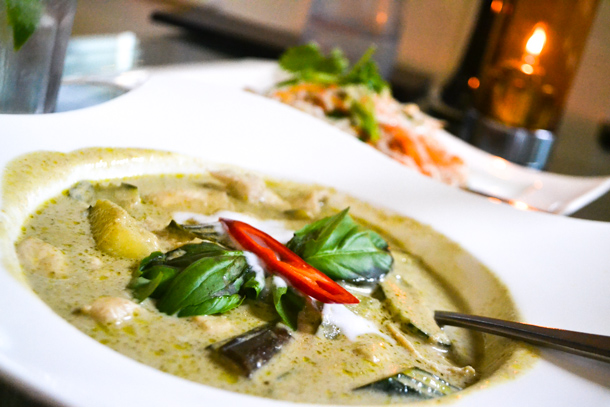 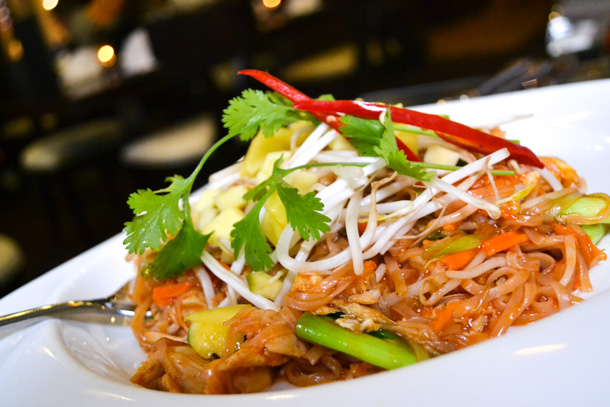 A selection of ‘classic desserts’ is available, but to complete the Thai experience we resisted the temptation to go for the Chocolate Fudge Cake (£5.75) and opted for Bananas in Sweet Coconut Milk (£5.75) and Thai Pancakes (£6.95) instead.

Bananas and coconuts are staples of Thai cuisine. I like them both but as a dessert they didn’t quite hit the spot. Perfect baby food but a bit too simple for a dessert for my liking. 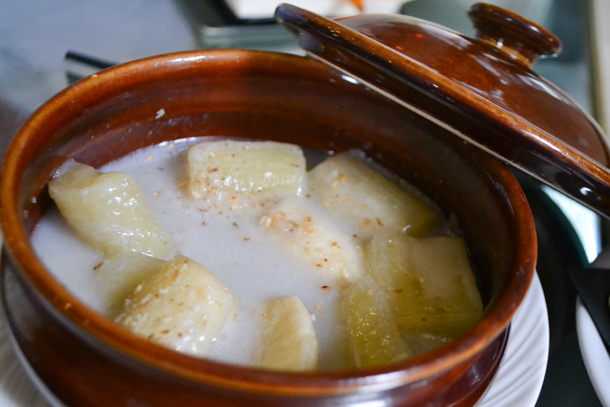 The pancakes were soft and sweet and bright green with three different fillings – pandan leaf, sticky rice and coconut caramel. Thai pancakes. Melt-in-your-mouth and lighter and easier to digest than they appeared. 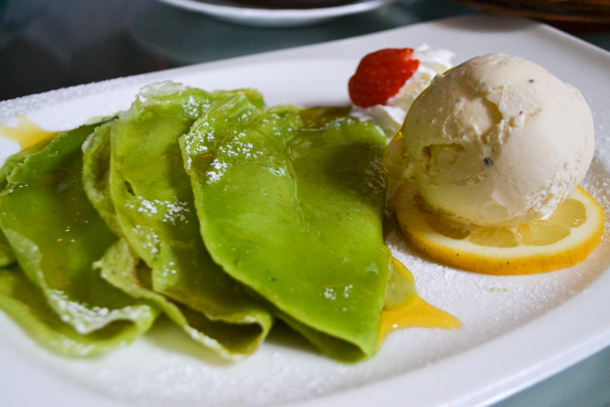 I’ll be back. It’s not the cheapest Thai restaurant in Manchester but you get what you pay for. The surroundings are opulent, the food is lovely and the portions are generous – so generous that I was rather worried that I might have to be removed from the sunken table by hoist.

The service is five star and the staff are mega friendly and charming. Next time I want to try the Massaman Lamb Curry (£10.95) – the dish CNN described as “emphatically the king of curries, and perhaps the king of all foods,” but for dessert I’ll go for the chocolate fudge cake rather than the bananas and coconut milk.

By the way, Chaophraya run cookery school master classes-perfect if you love Thai food and want to do it yourself.

They’ve also just launched a Thai Tapas menu (3 tapas dishes for £9.95) which offers something for those who like to pick and graze. 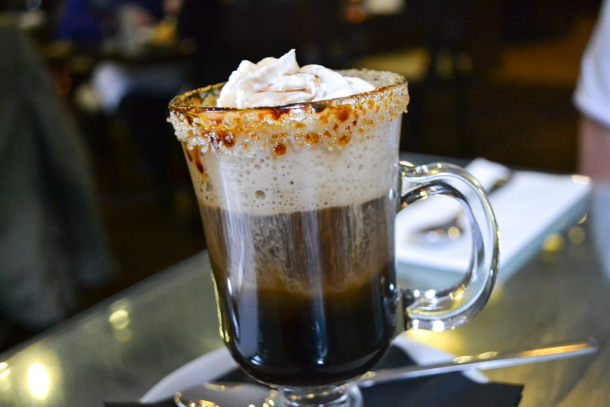