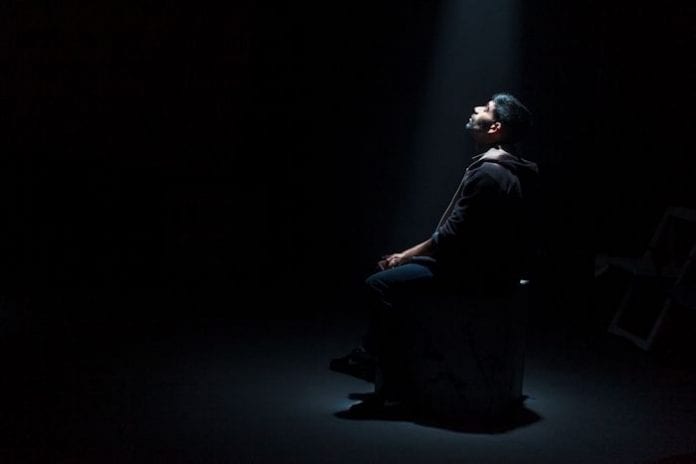 “Here are your temporary travel documents. You need to keep this on you at all times,” says a border patrol official, as he hands me a map and my freshly stamped ‘tickets’.

This experience isn’t what I am used to when attending a show, let alone in my everyday life. Having my name scrupulously searched for, receiving second glances, waiting for permission and ultimately feeling unwelcome.

Unfortunately, what is a world away for me is very much a reality for many others and that is just what I am about to understand, as I enter the realm of Be//Longing.

Now resembling a warehouse on the edge of a border, Hope Mill Theatre hosts the immersive production Be//Longing, created by Take Back Theatre and Manchester Migration Lab.

The unapologetically political Take Back collective was born as an artistic response to urgent political and social issues in October 2015. The award-winning team are made up of actress Julie Hesmondalgh, writer Becx Harrison and visual artist Grant Archer. 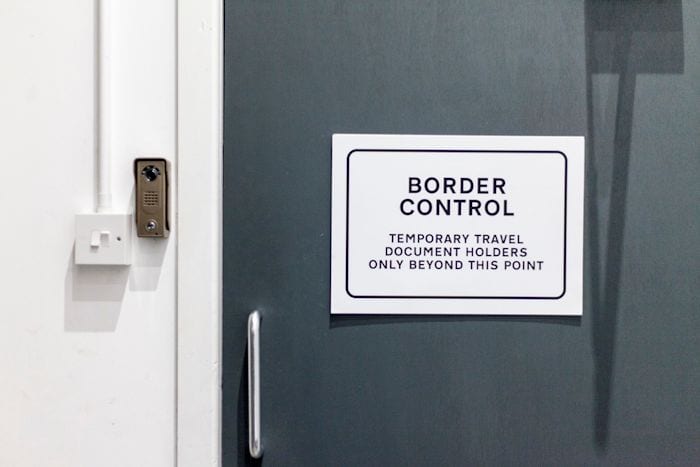 This thought provoking multi-media production aims to shine a light on the findings of the Lab’s research, to inform debate, evoke action an eradicate the myths and misconceptions about migration.

Before entering the main theatre space, audience members are welcome to explore the exhibitions in the foyer. Telephones are dotted around the venue, playing harrowing first-hand accounts from migrants.

There is also a raw photography exhibition Exodus from Myanmar by Nizar Dhan, which struck a nerve with a photo of a derelict house with the pleading messages ‘please help me’ and ‘don’t ignore me’ spray painted on its side.

In the main space we take our seats to watch Borders, a short film by Archer, sees dancer Yandass Ndlovu constrained inside chalk borders, restricting her inside a space and limiting her ability to move as freely. Food for thought.

The centrepiece of the evening is a 40-minute theatre production by Harrison and directed by Matt Hassall.

Actors Nadia Emam and Darren Kuppan explore the interruptions of borders and the everyday challenges they create for those closest to the issue. Their characters are referred to as A, B, C and so on and talk mainly in the third person, suggesting society views migrants and those most in need as unembodied. Both actors are incredibly engaging and don’t shy away from taking on the sensitive subject matter.

Next there is a screening of the Maximo Park music video Risk to Exist which they created  to raise awareness of Migrant Offshore Aid Station.

The evening bookends with further installations in the main theatre space. Framed displays front pages of fearmongering articles to demonstrate the effects of media portrayal of the refugee crisis on everyday lives.

Under Canvas is an audio installation which studies birth in refugee camps and stateless babies. The project featured in the Bolton Library for Reveal Festival earlier this year, where I felt it worked better than in Be//Longing because of the environment in which it was set.

The singular tent can only accommodate two people at a time, with the audio battling the  commotion from other installations in the space. With more time and quite to listen, the piece would have been fantastic.

Other exhibitions were New World Order, a fantastic interactive map or soundscape of the movement of people, goods and ideas, and a newsstand of the incredible publication Not The Fake News produced by the Migration Lab’s co-ordinator and researcher Dr Cathy Wilcock and Manchester based asylum seekers and journalists.

Be//Longing is a powerful experience which should be experienced by everyone. It is a huge accomplishment by everyone involved in and a tremendous accolade for the Manchester theatre scene.

My hope is that this project and its research continue to grow and reach as many people as possible. Theatre is and forever will be a legitimate platform for political and social change if companies like Take Back Theatre keep taking up the mantle.