Review: Art at The Lowry 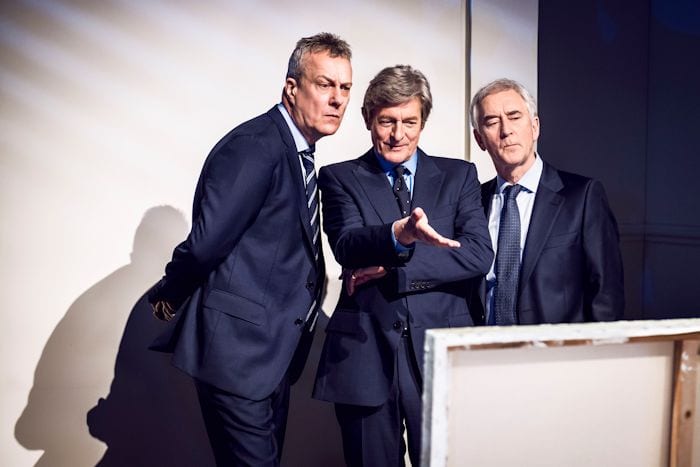 I don’t mean the man, obviously, because I don’t know him. His work. Mildly amusing visual jokes and political statements which don’t require much artistic talent.

They may be art but they’re not great works of art. I don’t mind them on walls. Just not on the walls of art galleries.

The experts clearly disagree. There’s one on display in Manchester Art Gallery. It’s called Love is in the Air and it depicts a masked rioter throwing a bunch of flowers. It looks completely out of place next to the Victorian oil paintings.

Lots of very rich people disagree, too. People who are willing to spend hundreds of thousands of pounds on one. Does that make them great works of art?

So what would I do if one of my best friends – someone I’d known for ages – bought one and asked me for my opinion?

That’s the premise on which Art is based. Three men who have been friends for 25 years – Serge (Nigel Havers), Marc (Denis Lawson) and Yvan (Stephen Tompkinson) – discuss the merits of a painting.

Except the painting in question isn’t a Banksy. It’s even worse – or better, depending on your opinion of Banksy. It’s a white painting – with white lines – which Serge has paid 200k for, but which Marc thinks is ‘a piece of white shit’.

Three men discussing a white painting doesn’t sound like a recipe for the most entertaining evening at the theatre. But the title is misleading. It’s about much more than art.

The play is even more relevant today than it was when it was first staged more than twenty years ago. Art is an even more controversial subject than it was then.

Remember the scale of the backlash when the curators of Manchester Art Gallery decided to remove John William Waterhouse’s painting Hylas and the Nymphs “to prompt debate”?

And it’s not just opinions on art which are dividing people. The world has become a more polarised place. People are becoming more entrenched in their views and less willing to compromise.

This is clearly an excellent production with three excellent performances from three fine actors. And it’s certainly amusing and entertaining. But is it an excellent play?

It’s one of the most successful comedies ever staged (even though the author doesn’t consider it to be a comedy). It ran for eight years when it opened in London’s West End in 1996. It has won an Olivier, Tony, Moliere and every other major world theatre award. And it has grossed £200m globally – an interesting number.

And it’s been called a masterpiece. So it must be. But why not decide for yourself?

Art is at The Lowry until 31 March.