REVIEW | A Taste of Honey at the Artzu Gallery

Manchester artist Chris Acheson draws much of his inspiration from everyday life and the black and white kitchen sink dramas of the Sixties so it comes as no surprise that the classic film A Taste Of Honey forms the basis of a wonderful exhibition that leaves a lasting impression, says Jemima Forbes…

A Taste Of Honey was an era-defying play by Shelagh Delaney which went on to become a West End hit and an award-winning film starring Rita Tushingham. It focuses around working class life in post-war Salford and addresses issues which were controversial at the time such as race, homosexuality, sex, and pregnancy.

The 1961 film was shot on location in and around Manchester and Salford and was one of Manchester artist Chris Acheson’s favourites when he was growing up.

Now Chris, who trained at Manchester Metropolitan University and lives and works in here, has brought the film back to life in a solo art exhibition which merges past and present in an interesting array of oil paintings.

The paintings give the impression of painted film stills yet Chris manages to give them new life and relevance. Taking images from the black and white film, Chris has recreated them in striking paintings and put his own stamp on them with the addition of a few contemporary twists – a modern tabloid newspaper in the painting Girl with a Cup of Tea and a row of recycling bins in Shelagh Take a Bow. We’ll let you spot the others yourself! 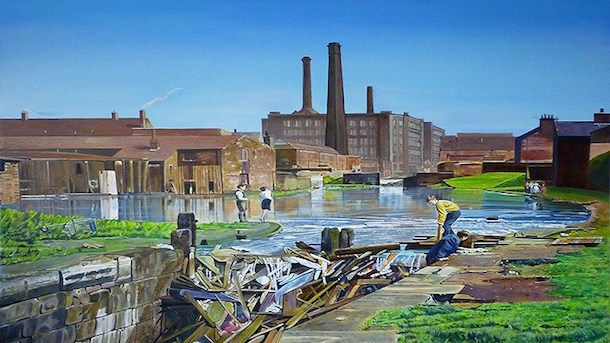 Manchester and Salford may be much changed from the 1960s but it is possible to recognise parts of the city’s famous canals in many of the paintings such as The Captain Said it Will and The Alley Alley Oh.

The paintings maintain an aura of theatricality and drama from the film by focusing on close- ups of some of the characters which emphasise their raw emotions.

Of the use of film stills, Chris says: “The detail on a film still in motion-capture is significantly less than you’d get with a digital camera, but still has enough detail to keep me interested.” The absence of this detail allowed Chris the freedom to make the images his own through his unique painting style whilst still maintaining a high level of realism.

Chris has spoken about how some of his paintings have been influenced by the works of other artists. In one painting entitled The Bonfire, children are depicted dancing around a fire in the street in an indirect reference to the work of Goya through its bold colour choices and composition.

The opening night of the exhibition was attended by Chris and the star of the 1961 film, Rita Tushingham. It runs until 6th December and is well worth a visit. Prints of some of the paintings are available to purchase from the gallery if you fancy adorning your walls with a bit of Mancunian culture with a humorous contemporary twist.