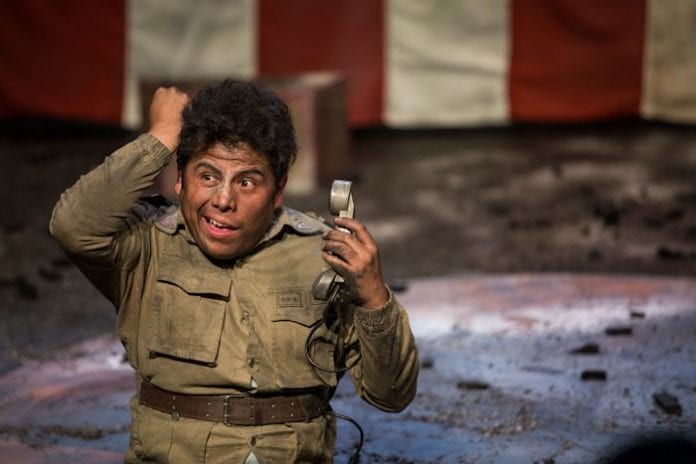 There’s more to clowning than buckets of water and custard pies. A renowned clown who uses his comedy to explore social and political issues such as violence and warfare is to perform at the University of Salford.

Lucho Guzman’s show Ceniza (Ashes) is inspired by real experiences of conflict in Colombia, and is based around a lone soldier who takes refuge in an abandoned big top and finds himself drawn into the world of the circus while a battle rages outside.

A highly experienced performer, director and teacher, Guzman founded the Pasos de Payaso (Clown Footsteps) company which has travelled as far as Washington DC as well as touring remote rural areas of Colombia. He has also taught at the National Hispanic Centre in New Mexico.

Earlier, Guzman, who has performed across North and South America, will bring more than 15 years of experience working in theatres, festivals and on the street to a workshop session for students on the university’s Theatre And Performance Practice programme.

The show will be followed by a discussion with Guzman chaired by university lecturer Dr Richard Talbot, an expert on clowning.

“Lucho Guzman is one of a number of performers across the world demonstrating how it’s possible to use traditional clowning skills to make audiences think about big social issues,” said Dr Talbot.

“It’s a real honour for him to perform here in Salford, and our students will draw a huge benefit from seeing how a unique performer from a different culture has taken an approach to theatre they may never have considered to create a passionate and important work.

“The workshop session will also provide an unrivalled opportunity for them to see an internationally renowned master demonstrating his craft at close quarters, and for them to develop skills which can be used across a wide range of performance areas.”

The show will be performed on Monday January 23 at 7pm in one of the high-spec performance studios in the New Adelphi Arts Centre, the £55m new home of the School of Arts and Media which opened in the autumn.