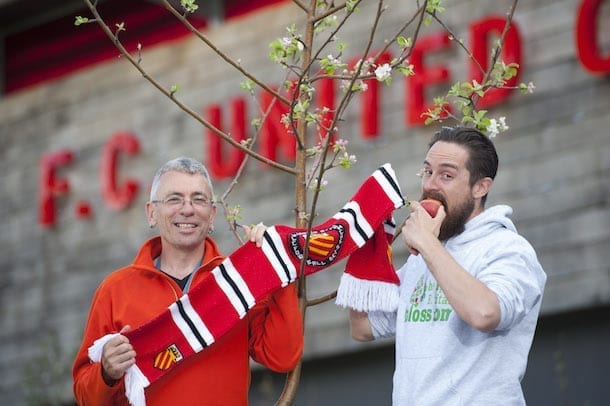 It’s crunch time for FC United fans. Soon they’ll be munching their way through free apples from trees which have been relocated from Moss Gardens community orchard in Moss Side because the iconic former Stagecoach bus depot site is being redeveloped into housing.

It plans to create an avenue of trees at its Broadhurst Park ground, featuring not just the ex-Moss Side cider apple trees but a wide variety of red fruit trees including cherry and plum, chosen to match the team colours.

On match days, fans and local residents will be able to help themselves to the fruit produced by the established trees, which can then be used for cider production, home baking or simply for munching on throughout the match.

It’s all part of Helping Britain Blossom, a partnership between Heineken, The Urban Orchard Project and The Bulmer Foundation, which aims to create and restore 100 community orchards across Britain by 2017, and Manchester City of Trees – not a football club but a movement which aims to plant three million trees in Greater Manchester over the next two decades.

A band of enthusiastic volunteers from the club, known as The Diggers, have already received training in planting, mulching, pruning and harvesting thanks to Helping Britain Blossom and local partners, Red Rose Forest.

“As well as being passionate football fans at FC United we’re equally as passionate about building a community-based club that is environment and wildlife-friendly,” said head Digger Richard Searle.

“Since the completion of our new ground at Broadhurst Park in 2014, we’ve planted more than 100 different trees and a variety of pollen-friendly plants and shrubs. This latest addition of 22 cider apple trees is a further celebration of nature and ties in with our plans to be a pollinator-friendly football stadium.

“Then of course there is the added benefit of free fruit for our fans and the wider local community. As a child I grew up in an area where fruit trees were plentiful and helping yourself to delicious ripe fruit was second nature. We want to bring that experience to visitors to Broadhurst Park, year after year. With the support of Helping Britain Blossom and Red Rose Forest, we hope to achieve that ambition.”

Peter Stringer, special projects manager for Red Rose Forest, part of the Manchester City of Trees movement, said: “This project demonstrates that everyone can do their bit for planting more trees and we hope that the example set by FC United and the other beneficiaries will inspire the people of Greater Manchester to contribute to the vision of planting a tree for every man, woman and child across the city region.” 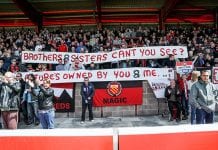 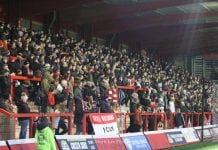 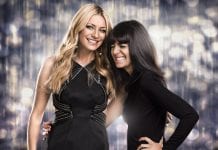 Three to see this weekend: beats, treats and dancing feet