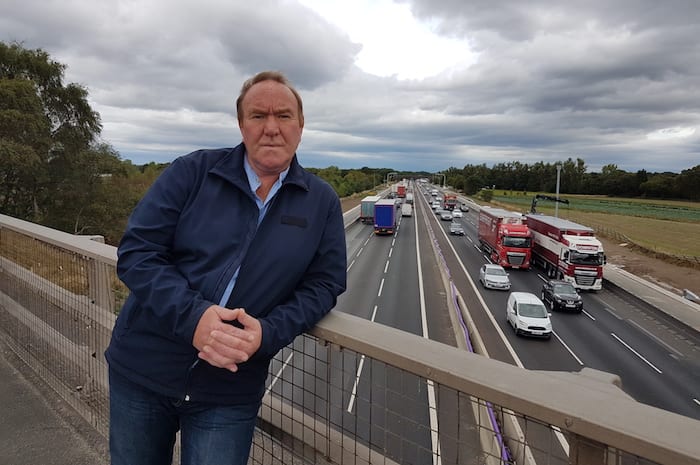 Hardly a day goes by without some kind of incident – all too often fatal – on the M6 motorway in Cheshire.

It’s the main arterial road linking Manchester with the Midlands and is popular with commuters from places like Knutsford and Crewe.

But the 19-mile stretch between Junction 16 and Junction 19 is so notorious for accidents that Highways England are currently spending more than £274 million on a four year project to convert the route into a “smart motorway”.

The work is due for completion next year. But will the huge project make any difference?

There are no obvious reasons why the stretch should be the scene of 1,000 incidents in just 12 months. The road runs flat and straight. The carriageways are in good repair. And there are no major centres of population along its route.

But many locals believe the road is haunted.

Now international psychic medium Mike Brooker, who has dubbed this section of the M6 Cheshire’s Bermuda Triangle, has vowed to get to the bottom of the mystery.

“I am determined to find out the source of all this negativity no matter what,” says Mike. “Too many lives have been lost and wrecked in accidents here.”

Many locals living close to Junctions 16 and 17 believe the road is haunted by the ghosts of Royalist Scottish horsemen, slaughtered by local Parliamentary supporters just outside the town of Sandbach in 1651.

About 1,000 soldiers, the remnants of a 14,000-strong Scottish force routed by Cromwell’s New Model Army at the Battle of Worcester in 1651 – after which King Charles II famously hid in an oak tree – were fleeing northward when they approached Sandbach on the day of the town’s Summer Fair on 3 September.

That night the local townsfolk and market stall holders attacked the exhausted Scots with knives, staves and billhooks as they slept in their encampment on land since known as Scotch Common.

According to contemporary accounts, ten soldiers were killed and 100 taken prisoner during the three-hour skirmish, while three townsmen were slain and others hurt.

The Sandbach “massacre” was, in all likelihood, revenge for an infamous atrocity carried out by Royalist forces eight years earlier in the village of Barthomley, close to M6 Junction 16. On 23 December 1643, a group of Royalist troops lit a fire in the church to smoke out a group of unarmed villagers hiding there. As they left the tower, 12 of them were cut down.

Mike, 46, who lives in Northwich, has been in touch with the spirit world since having a strange “out of body experience” as a 10 year old and has made a career of investigating paranormal activities.

“Motorway officials, the Highways Agency and numerous traffic management bodies have literally spent years and vast amounts of money and resources, trying to understand what makes that stretch of the motorway, both north and southbound, so treacherous. To date, they have no explanation whatsoever.

“I have also pondered this over the years and have conducted some research into this phenomenon. I was amazed at just how many people had posed this very same question over the decades.

“There appear to be two principal answers that come up. One is that the motorway was built on a Roman burial site and the other is the slaughter of Scottish troops.

“There is no clear evidence either way to support or substantiate these claims. But what is clear is that something is very wrong to cause so many accidents on what is, to all intents and purposes, a fairly straight stretch of road.

“I personally believe there is something supernatural that has attached itself to this particular stretch of motorway. When ‘science’ holds it’s hands up and is at a complete loss to explain this plethora of accidents, there is perhaps an alternate explanation. I am currently conducting my own personal investigation into this phenomenon.

“When I went to the bridge crossing the M6 near Middlewich, I got a very strong sense of a Saxon influence. This part of Cheshire has Saxon place names and the Saxon crosses in Sandbach are famous.

“I hope to make contact with a spirit that might give a clue to why these incidents are happening.”

A local web forum that featured the tale elicited more than 40 responses, some of them fanciful, but others from drivers experiencing feelings of unease along the stretch. In 2006, the M6 was voted Britain’s spookiest motorway in a survey of drivers by the Tarmac company.

A Highways England spokesman said: “Before undertaking major projects like on the M6, every aspect is examined in great detail and taken into consideration. But calling Ghostbusters really would be a first.”