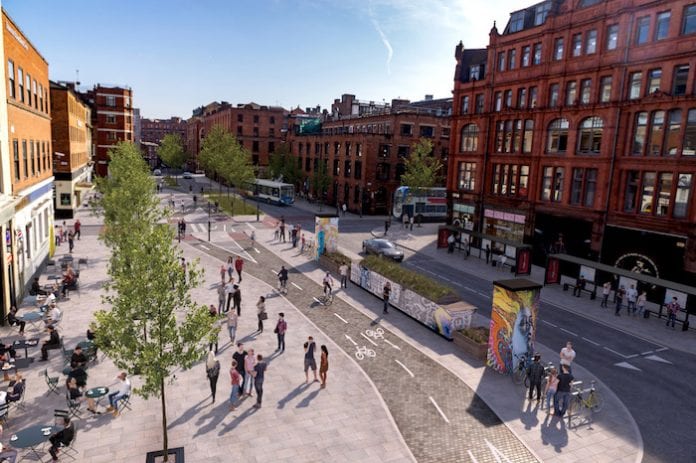 Some bad news for motorists. Good news for everyone else.

Proposals to ban motor traffic from parts of Manchester’s popular Northern Quarter have been revealed to make the area’s streets “even more dynamic, lovely to look at and pleasant to use.”

The city council promises the £11.6 million scheme will make the Northern Quarter safer, greener and better for everyone and launched a public consultation for locals to have their say until Monday, 17th February.

Plans to create a walking and cycling-friendly route running between Piccadilly and Victoria railway stations will include the partial pedestrianisation of Stevenson Square and Thomas Street.

The detailed proposals include the removal and possible relocation of on-street parking bays from Dale Street, cycle segregation and protection on High Street and cycle lanes for both sides of Withy Grove.

As part of the proposed scheme, no vehicles would be able to use Stevenson Square between Oldham Street and Newton Street to travel towards Piccadilly, with the existing stretch of highway being removed and a new cycle lane added.

Thomas Street would become a pedestrian and cycle-only zone under the plans, except for loading permitted between defined times in the mornings and evenings, while traffic would be permitted to turn right from Shudehill to use a currently tram-only stretch of High Street.

A series of events will be held in January, to allow interested parties to view the plans and provide their comments in person.

The project is part of the proposed Greater Manchester-wide Bee Network, which will become the UK’s largest joined-up network for pedestrians and people on bikes.  It is being funded thanks to a £10.6m contribution from the Greater Manchester Mayor’s Challenge Fund, plus an additional £1m via a government Cycle Cities Ambition Grant.

Greater Manchester’s Cycling and Walking Commissioner, Chris Boardman, said: “The Northern Quarter is already a bustling and dynamic hub of activity in the city centre and this scheme represents a real opportunity to enhance the experience and to encourage even more people to see what the area has to offer.

“These plans will make the area safer, greener and a more attractive place to be.  I’d encourage people to get involved and give their feedback on how we can make the most of this area, for everyone that uses it.”