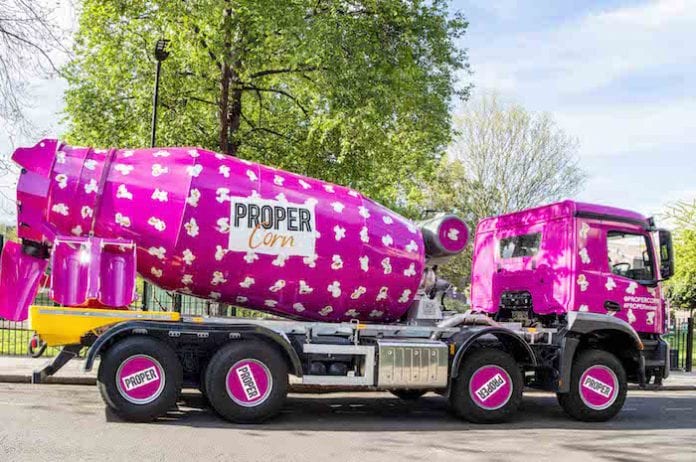 If you spot a 33ft pink cement mixer in Piccadilly Gardens next Friday, don’t worry. You’re  not hallucinating.

The vehicle will be on a national tour to celebrate the 10th anniversary of colourful popcorn maker Propercorn.

Back in 2009, and inspired by the TV programme Top Gear, Cassandra Stavrou used a car spraying kit in her mother’s kitchen to coat her very first batches of popcorn with oil, before tumbling them in a refashioned cement mixer.

She launched the brand with co-founder Ryan Kohn in 2011 and it’s now stocked in 15 countries around the world and listed as one of the fastest growing independent businesses in Europe.

In 2018, Propercorn launched the UK’s first palm oil free microwave popcorn and a range dedicated to kids. Suitable for vegetarians and gluten-free, all recipes are created by its London based team using delicious natural seasonings and the best quality ingredients.

Next week, Propercorn will be transforming its concrete mixer with an unmissable popcorn pattern and signature splash of colour.

The tour begins on 26 April and sees the Propermixer travel more than 500 miles from London to Leeds, Manchester and Birmingham.

It will reach Manchester on 3rd May, handing out Propercorn’s eight flavours of popcorn to people in Piccadilly Gardens.

Anyone who spots the Propermixer on its travels and shares a picture with @Propercorn could be in with a chance of winning a year’s supply of popcorn.

“The humble cement mixer has become a real emblem for Propercorn and of the resourceful and creative approach we’ve taken since day one,” says Cassandra. “We can’t wait to share our snacks with people across the country and couldn’t think of a better way to celebrate our team’s passion for popcorn than with a nationwide road trip in the Propermixer!”