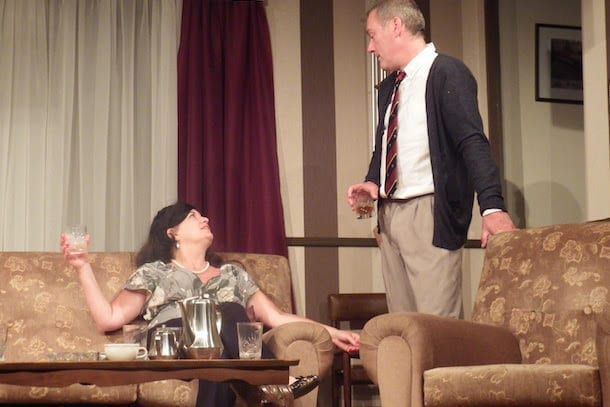 Manchester. A place where culture lovers are spoilt for choice. When it comes to theatre, we’ve got world-class venues such as The Royal Exchange, The Palace, and The Opera House, with The Lowry just over the water. We’ve got fringe festivals, too. So it’s easy to overlook what’s going on at smaller venues all over the area, says Dennis Keighron-Foster.

The Chorlton Players are an amateur dramatics group with over 50 years of theatre under their belt who pride themselves on not conforming to the stuffy stereotypical am-dram societies of old. They perform five shows every year and have established a reputation for offering a wide variety of plays, pantomimes and sketch shows.

“this play is quite a
challenge for an
amateur group as its
cast comprises only
four characters, some
of whom rarely leave
the stage”

This week they are performing Edward Albee’s Who’s Afraid Of Virginia Woolf?

Set over the course of one evening, we are invited into the home of Martha and George. Martha’s bitter and drunken insults reveal her frustrations in her marriage and her own life. Everything comes to a head when she invites a seemingly naive younger couple, Nick and Honey, in for a drinks party where both she and George draw them into their increasingly twisted and emotional mind-games.

If you’ve seen the play before, or maybe the 1966 film starring Elizabeth Taylor and Richard Burton, you will know that this play is quite a challenge for an amateur group as its cast comprises only four characters, some of whom rarely leave the stage!

Jean Hall, who plays Martha, is looking forward to getting her teeth into the role as well-written parts for women in their 50s do not come along very often.

“Martha is perceived as a loud, vicious-tongued, domineering woman who is angry and frustrated. From an actress’s point of view, this is a tough and rewarding part to play.”

“A fantastic play – full of drama,” says Andy O’Brien, who describes playing the part of George as “terrifyingly exhilarating.”

“As a study of four extraordinary people, none of whom one would ever want to meet, it is peerless. It’s a privilege to be playing one of them. It’s also very hard work. Rewarding. But hard work.”

This play excites me a lot as I love small casts, especially when it’s am-dram. There’s nothing I hate more than 20 people stood in a semi-circle for an hour and a half! It seems to have all the right elements – a dedicated team, enthusiastic, well rehearsed and experienced actors (including one pro!), a beautiful and well thought out set and that extra magic when everyone involved loves the play. So it promises to be a good ‘un! See you there.

For tickets go to chorltonplayers.com or buy on the door